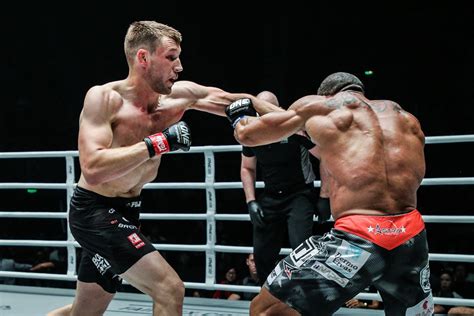 ONE on Prime Video 5: De Ridder vs. Malykhin Preview and Predictions

ONE Championship returns to action with another double-header weekend. Before ONE 164 on Saturday, ONE on Prime Video 5 goes down on Friday, Dec. 2, free to all North American Amazon Prime subscribers.

In the co-main event, rising superstar Kade Ruotolo is defending the ONE lightweight submission grappling title for the first time against IBJJF world champion Matheus Gabriel. Ruotolo has been an essential part of ONE’s expansion in submission grappling, and beating Gabriel would be another feather in his cap.

The third title fight on Dec. 2 is an atomweight Muay Thai matchup between reigning champion Allycia Hellen Rodrigues and interim champion Janet Todd. ONE on Prime Video 5 also features the highly anticipated debut of Robert Soldic, who surprised MMA fans by signing with ONE over other major promotions.

ONE on Prime Video 5: De Ridder vs. Malykhin airs live in its entirety on Amazon Prime Video with the lead card starting at 8 p.m. ET, followed by the main card at 10 p.m. ET. Let’s take a look at the preview and predictions.

Reinier de Ridder vs. Anatoly Malykhin has several factors that make this a must-see fight. Malykhin is moving down from the heavyweight division for a crack at the light heavyweight champion. Meanwhile, de Ridder moves between middleweight and light heavyweight, which offers concerns about his durability against the Russian’s devastating power.

With that said, de Ridder’s MMA grappling pedigree has proven to be world-class. ‘The Dutch Knight’ has eleven submissions through sixteen wins, which could cause issues for Malykhin. The undefeated Russian has his own specialty, with seven KO/TKOs coming from his ten wins. Both fighters have an undefeated record, but de Ridder’s grappling advantage should lead to a submission in the second half of their main event title fight.

Kade Ruotolo claimed the inaugural ONE submission grappling world championship back in October; how does he fare in his first defense against Matheus Gabriel?

Kade Ruotolo has an unbelievable amount of momentum after becoming the youngest ADCC champion and inaugural ONE lightweight submission grappling champion in 2022. Ruotolo beat an MMA fighter, Shinya Aoki, in his promotional debut and a Sambo specialist, Uali Kurzhev, for the title.

The nineteen-year-old has now been matched up against another Jiu-Jitsu world champion, Matheus Gabriel. Although the Brazilian has the credentials to give Ruotolo troubles, Kade’s creativity has made him nearly unbeatable, which should lead to another win inside the distance at ONE on Prime Video 5.

Allycia Hellen Rodrigues shocked ONE Championship fans when she beat Stamp Fairtex in August 2020. Since then, Janet Todd became the interim champion while Rodrigues was inactive, giving birth to her child. Todd has looked phenomenal during her seven-fight winning streak, but the inaugural champion wants her undisputed throne back.

Rodrigues showed her toughness and ability to adjust against Stamp. Yet, that title fight was in 2020, making it challenging to create expectations for her return. Meanwhile, ‘Jt’ has been more active and continues to evolve. Todd’s speed advantage will likely throw off the inaugural champion’s timing, leading to a unanimous decision win for the American.

The ONE on Prime Video 5 sleeper matchup was a late addition, with Tye Ruotolo, twin brother of Kade, taking on former ONE featherweight MMA world champion Marat Gafurov in submission grappling. Anytime an MMA fighter takes on a Jiu-Jitsu competitor, the BJJ specialist wins nine out of ten times. With that said, there’s a bigger storyline playing out between Ruotolo and Gafurov.

The Ruotolo brothers both compete in ONE’s lightweight submission grappling division. Although Tye has beaten the current ONE champion twice outside of the promotion, seeing the twin brothers grapple for a world title would have an intriguing buildup. If they both win at ONE on Prime Video 5, Tye could end up matched against Kade next.