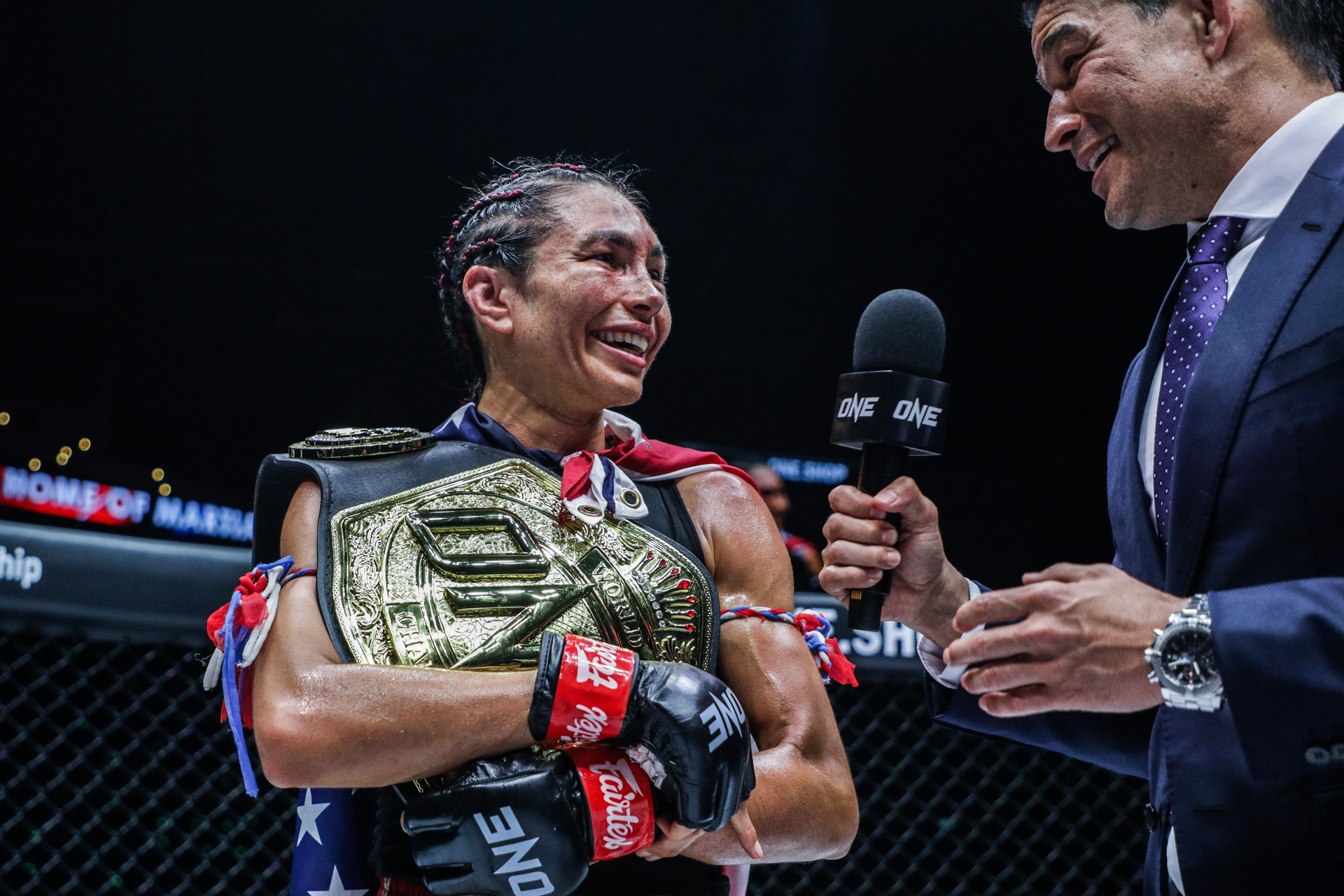 Janet Todd realized a dream when she claimed the ONE interim atomweight Muay Thai championship earlier this year. At ONE on Prime Video 5: De Ridder vs. Malykhin, available for free to all U.S. and Canadian Amazon Prime subscribers, the striking star has a chance to unify the title against divisional queen Allycia Hellen Rodrigues.

The matchup, taking place on Friday, Dec. 2, from the Mall of Asia Arena, will put Todd in the spotlight in U.S. primetime. As a Muay Thai champion who is American, she takes the responsibility seriously, as more fans drop their jaws at the wonders of the sport in four-ounce gloves.

“I feel very fortunate and very thankful that I get to be like the American representative on primetime and also for Muay Thai. It’s a sport that I love, and I hope that people are watching it. They would see that and be like, ‘Oh, Muay Thai is awesome. Why haven’t I started watching ONE Championship?’ I hope I get to be part of that movement to expand the viewership out here for ONE Championship,” Todd said.

“JT” is readying for a stiff challenge by the returning Rodrigues. The atomweight Muay Thai titleholder has been out of action since her championship win against Stamp Fairtex in 2020. The Brazilian star took time away from the Circle to focus on starting a family.

Despite that fact, Todd isn’t expecting any ring rust from her upcoming rival. In fact, the Californian feels that Rodrigues will enter the Circle motivated by her new child, and, because of that, she’s preparing for the toughest battle of her career.

“Her strengths, definitely when she starts off, she can see forward movement, and it’s very good with her counter left kick and timing that. And then as the round moves on, she’s able to still come forward and try to push the pace, and in the clinch, I think that’s where her strengths are,” Todd said.

“So my game plan, obviously, is to kind of nullify those strengths and be able to get myself in position to be able to use my weapons. Kind of similar to what [Jackie Buntan’s] kind of good at is – using my angles a little bit to land my shots.”

In Todd’s last bout, a five-round thriller with Lara Fernandez, she was encouraged by her ability to come alive deep in the match. Her self-described tenth gear is giving Todd the confidence she needs ahead of the unification bout, and she’s hoping to score a highlight-reel finish for her friends and family back home, but she will fight until the last second if needs be.

“Yeah, everybody wants a knockout, but you can’t really search for it during the fight. It just has to naturally come. But I’m hoping [to get the knockout], like in every fight. I feel like with every fight, this is what I want for myself. It’s just showing that fluidity, movement, and technique, and also showing that I have power with my shots, and just that accuracy,” Todd said.

ONE on Prime Video 5: De Ridder vs. Malykhin airs live and free to all Amazon Prime subscribers in the U.S. and Canada on Friday, Dec. 2, at 8 p.m. ET.