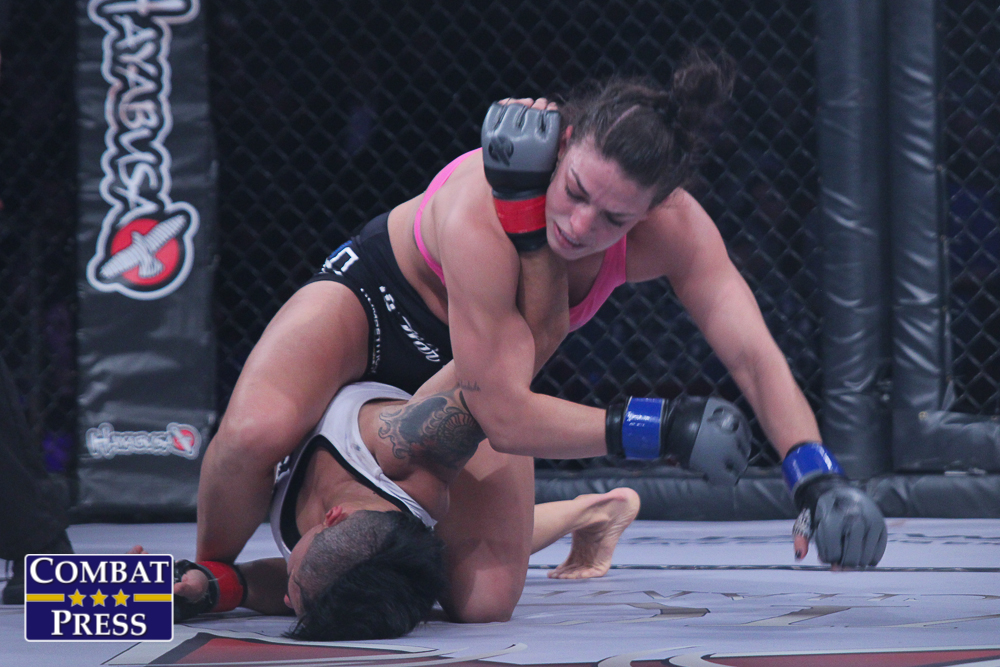 On Saturday, Oct. 1, the UFC is back at the UFC Apex in Las Vegas for the second of three fight nights in a row, when top-six strawweights Mackenzie Dern and Xiaonan Yan face off in the main event. Both ladies suffered their most recent losses at the hands of third-ranked Marina Rodriguez. However, while Yan has not been in the cage since then, Dern got back in the win column with a split-decision win over then-surging Tecia Torres in Apr. 2022. A win for either of these women will get them back in the title hunt.

The co-main event features a battle between unranked welterweights Francisco Trinaldo and Randy Brown. With the 32-year-old Brown riding a three fight winning streak, and the 44-year-year-old Trinaldo winning his last two, either man could be on the hunt for a top-15 ranking with a win.

The remainder of the main card includes two on-the-bubble bantamweights with Raoni Barcelos meeting Trevin Jones, the promotional debut of Don Shainis against Sodiq Yusuff, Daniel Santos looking for a badly needed win over John Castaneda, and Mike Davis taking on Viacheslav Borshchev in a bout of up-and-coming lightweights.

The main-event fighters are on opposite trajectories recently with Mackenzie Dern having won five of her last six, and Xiaonan Yan dropping two in a row; does Yan get back on track and topple the momentum of Dern?

Sumian: It is true that Yan has lost two in a row, but they were to elite strawweight competition in Marina Rodriguez and champion Carla Esparza. Yan is extremely well-rounded, durable and capable of going the distance with relative ease. A win is a must if she hopes to keep her title aspirations alive in this stacked women’s division.

Dern has always had the potential to become not only a star, but an elite talent at 115 pounds. Her grappling ability is one of the best on the entire UFC roster, and she has continued to improve with every Octagon performance. When Dern is mentally on her game, she is extremely difficult to defeat and will give any top strawweight a run for their money.

Despite Yan’s abilities, this is Dern’s time to shine. She will utilize her improved footwork and striking to keep up with Yan and secure a clear unanimous-decision victory. A focused Dern should be a fun addition to the strawweight title picture.

Petela: Marina Rodriguez and Carla Esparza are among the best strawweights on the planet. Both of the women in this weekend’s main event are just a notch below that level and a half step away from being at the championship level. There is no doubt that Mackenzie Dern is an absolutely incredible grappler, and her striking game is coming along nicely. Xiaonan Yan is a more well-rounded fighter with a background in Sanda – which is Chinese kickboxing, contrary to Daniel Cormier’s apparent opinion – and Brazilian jiu-jitsu, but she will definitely be a step behind Dern should the fight get to the canvas.

Expect Yan to use her advantage on the feet to cruise to a decision victory. Her footwork is much better than Dern’s, who still tends to be a little flat-footed as she marches forward, bobbing and weaving her upper body, and that will make her very difficult to hit. This will be a 25-minute game of cat and mouse with Dern consistently unable to grab a hold of Yan and drag her down to the mat. At the end of this contest, it will be quite apparent that both Dern and Yan have some work to do before they can be considered on the short list for next title challengers.

Francisco Trinaldo is 44 years old but is still competing at a high level; does the quadragenarian rattle off a third straight win against a streaking Randy Brown?

Petela: No. One thing that Francisco Trinaldo has done really well in the latter portion of his UFC run is manage his energy. Trinaldo certainly has the talent to still compete inside the UFC, but he won’t be able to match Randy Brown’s pace for the entire 15 minutes. In his last couple fights, Trinaldo has been able to dictate the pace of the contest for several minutes at a time. He has exploded with combinations often enough, and avoided taking much damage, to win his recent bouts. Combined with the move up to welterweight, it has been a great plan, but he has a different type of opponent in Brown.

Not only is Brown a long, rangy fighter who will have an eight-inch reach advantage, he has a great gas tank. He will push Trinaldo into moving constantly, whether it is rushing forward to close distance or back-pedaling to avoid being in boxing range. By halfway through the fight, it will be evident that Trinaldo is starting to slow down, and Brown will ratchet up the pressure even more in order to get a third-round stoppage.

Sumian: Agreed with my colleague, this just seems like a mismatch for the aging veteran. Trinaldo is no slouch, even at 44, but Brown is a fairly significant mismatch for the Brazilian and should be able to either finish or secure a dominant unanimous decision. Trinaldo’s days in the UFC are numbered at this point, but he has been nothing short of outstanding in the back half of his UFC career.

Don Shainis — do we need to know this name?

Sumian: The fact that Don Shainis is taking on rising featherweight Sodiq Yusuff in his UFC debut must speak to the potential that the UFC sees in him. He enters the Octagon with a 12-3 record and is an established knockout artist. Despite this, it is hard to imagine a scenario where he is able to defeat Yusuff. Yusuff will hold distinct height and reach advantages and should be able to utilize his experience against better competition to earn a victory. Shainis’s next UFC appearance will be the real determining factor in his potential.

Petela: Don’t expect a win from Don Shainis against Sodiq Yusuff, but he could very well be the real deal. The Massachusetts product has real knockout power, and he’s entering the UFC in his physical prime. If a loss in his debut doesn’t discourage him, Shainis could make a move towards contendership before too long.

Petela: Guido Cannetti. Despite coming into this fight on the heels of a knockout win, the Argentinian fighter needs to make it two straight wins if he is going to stay on the UFC roster. He is just 3-5 inside the UFC, and his last win came over Kris Moutinho who is winless inside the promotion. If he can’t get past Randy Costa, Cannetti probably won’t have a place inside one of the most talent-stacked divisions in the organization.

Sumian: Ilir Latifi is one of those fighters that doesn’t belong on the UFC roster. He will be an asset to a lesser organization such as Bellator or PFL. A loss to the aging Aleksei Oleinik may be exactly what sends the Swedish native out the door and onto a new horizon.

Sumian: The matchup between Kryzsztof Jotko and Brendan Allen will be a fun one from start to finish. A back-and-forth affair should be on tap when these two middleweights meet in the Octagon. Allen will take the fight to Jotko and force a great fight for the fans.

Petela: Jessica Penne vs. Tabatha Ricci. These two Brazilian jiu-jitsu black belts will start the night off with a fun back-and-forth affair. Penne really needs a win to try and stay relevant after dropping her last fight against newcomer Emily Ducote. With her back against the wall, Penne will force the action early and often, and there will be a number of scrambles that keep fans entertained throughout the 15-minute contest.

Petela: It’s got to be Aleksei Oleinik. He’s taking on Ilir Latifi in a bout that looks like it is finally taking place after being rescheduled several times. This will be a classic Oleinik performance, where he sells out for the submission early and often until he gets it or he gets knocked out. This time around he will be successful and snatch-up Latifi’s neck to wow fans across the globe with his very veteran submission trickery.

Sumian: Dern by submission. There is definitely a chance she doesn’t finish this fight, but my gut tells me she will get it done in impressive fashion and earn herself an extra 50 thousand dollars.

Sumian: Onto the next one. This card is as uneventful as they come. Besides the main event, which is questionable already as a headliner, there is not a single fight on this card that is must-watch TV. The next couple of weeks should prove to be stale appetizers, as we get ready for the best card of the year in UFC 280.

Petela: There isn’t much to be excited about in this one, that’s fair. I try to avoid giving a generic “drinks and friends” answer here, but, with a fight night as lackluster as this one, that’s really the proper choice. Outside of a few fun fights early, this could be an evening full of snoozefests, so go ahead and have a few pals over and enjoy your favorite cocktail as you watch this event.