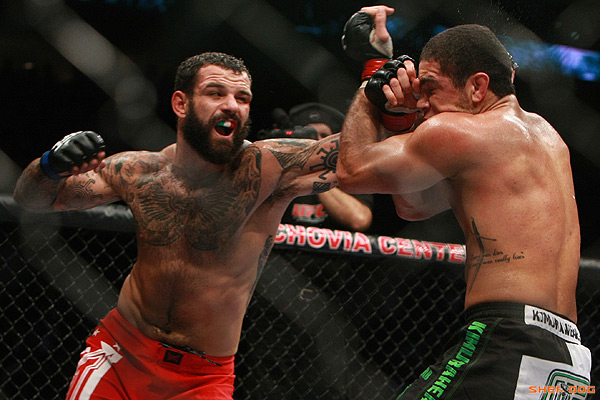 Bellator 211: Sakara vs. Kauppinen and Bellator Kickboxing 11 Preview and Predictions

Bellator travels to the RDS Stadium in Genoa, Italy, on Saturday, Dec. 1, for Bellator 211 and Bellator Kickboxing 11. In what has become a staple for the promotion’s European events, Bellator brings out both the cage and the ring.

In the main event of Bellator 211, hometown hero Alessio Sakara returns against England’s Kent Kauppinen. The Italian star has won three of his four bouts with the promotion, including three stoppage victories in the light heavyweight division. Kauppinen fell short in his promotional debut against fellow British prospect Walter Gahadza.

Alessio Sakara is an obvious pick to headline an MMA card that takes place in Italy, but does he deserve his spot atop a Bellator lineup? Will he get past light heavyweight opponent Kent Kauppinen?

For the most part, Bellator has done a good job of attempting to create regional stars, especially for its ventures into Italy, where the promotion has brought in Italian fighters for the kickboxing and MMA shows. Giorgio Petrosyan, Gabriele Casella, Gloria Peritore and Sakara have all been featured. Bellator has also brought over promotional staples like Raymond Daniels, Gabriel Varga and Kevin Ross. However, the events with the most pop in Europe feature homegrown stars from their respective countries.

Sakara is one of those stars. “Legionarius” may never become a big name amongst the casual North American audience, but the promotion has catered its European events to the live audience. It makes it pretty easy when almost every Bellator Kickboxing show airs via tape delay, but that’s an entirely different discussion.

The 37-year-old Sakara has a following of dedicated fans in his home country. The Italian fans come out to see Sakara despite the former UFC fighter never cementing himself as a well-known commodity globally. The 16-year MMA veteran has made the decision easy for Bellator brass by winning three of his four bouts with the company. Sakara stopped veteran fighters Joey Beltran, Brian Rogers and, most recently, Jamie Sloane, all inside of two rounds. Sometimes the biggest stars in the sport aren’t the best fighters, but rather the most entertaining or recognizable ones.

If Sakara keeps trending in the same direction, he’ll continue to be a feature on Bellator’s Italian events for potentially years to come. Now, will the European cards ever be as strong as the domestic events? No. However, this fight card panned out fairly well, because the promotion has increased its kickboxing presence over the years. The kickboxing athletes are and will continue to be the key to Bellator’s success in the region.

Sakara was essentially written off after a four-fight skid to end his UFC career five years ago. Bellator has given him every chance to be a star, even going so far as to give him a middleweight title shot against former champion Rafael Carvalho in front of the Italian audience following back-to-back wins in 2016.

Sakara has been given another favorable match-up in his fourth headlining opportunity with the promotion. He takes on Kauppinen, who has dropped back-to-back fights this year. The 26-year-old had won six fights prior to his recent skid, but his competition was less than thrilling, to say the least. During his six-fight winning streak, Kauppinen’s opponents combined for an abysmal 28 wins and 99 losses. One fighter — Shaun Lomas — accounted for 22 of those wins.

This main event gives the Italian fans something to cheer for, which is exactly why Bellator is willing to give Sakara these headlining opportunities.

The title challenger is an experienced Muay Thai fighter who has fought all over Europe and Thailand. Cangelosi has been a consistent feature on Italy’s Muay Thai scene throughout his career, which spans 49 fights. The 35-year-old holds a record of 34 victories, 13 defeats and two draws. The Italian returns to the ring for the first time in over a year against the current Bellator and former GLORY featherweight champion Varga. Heading into the contest, Cangelosi has lost three of his last five fights, all of which came under Muay Thai rules.

The biggest question heading into the bout is whether Cangelosi can adapt to the kickboxing rules against a mainstay in the division. Cangelosi employs a style that makes this fight far more interesting. He is a crafty southpaw with solid head movement and good counter striking. Cangelosi has a very solid Muay Thai base with strong low kicks, good defense, excellent step knees, striking to the body, crisp hands and a diverse kicking attack. He recently fought the great Saenchai, who is a highly skilled southpaw. Cangelosi was much bigger, but the living legend was able to outscore and outsmart his less experienced foe.

Cangelosi will take on another southpaw in this upcoming title bid. Varga has the overall edge in resume, with victories over the likes of Serhiy Adamchuk, Mosab Amrani, Abdellah Ezbiri and Lerdsila Phuket Top Team. However, Cangelosi has all of the tools to knock off the less experienced combatant. Unfortunately, Varga seems primed to spoil the Italian’s debut.

Also on the Bellator Kickboxing 11 portion of the show, welterweight champion Raymond Daniels puts his strap on the line against Zakaria Laaouatni. Will Daniels continue his reign with another victory here?

At age 38, Daniels has continued to improve the aspects of his game that were flawed when he was facing the best of the best at welterweight in the GLORY rankings. Daniels found success with his high-flying, acrobatic striking style that earned him highlight-reel finishes against Brian Foster, François Ambang, Jonatan Oliveira and Justin Baesman. Unfortunately, he could never get over the hump that was Joseph Valtellini and Nieky Holzken. In his last GLORY fight, Daniels fell short against Holzken for the vacant welterweight strap.

Since that 2015 fight, Daniels has defeated seven consecutive opponents. He scored big wins over Karim Ghajji, Djibril Ehouo and Giannis Boukis. Daniels was destined to be a big feature in Bellator’s expedition into kickboxing when he signed with the promotion in 2016. He’s knocked out four of those seven opponents and competed from Italy to Hungary to San Jose, Calif. His reign of dominance isn’t without some controversy, though, as he defeated the former welterweight champion Ghajji on an ill-advised doctor’s stoppage after the first round of action. The bout was a closely contested affair, but it’s hard not to believe the fight could have potentially played out differently had it gone the five-round distance.

French-Moroccan Laaouatni makes his promotional debut following a loss to fellow Frenchman Karim Benmansour at Partouche Kickboxing Tour in October. The 33-fight veteran has won 29 of his bouts and suffered just four defeats. Earlier this year, he defeated Kunlun Fight veteran Serginio Kanters in the opening round of the La Nuit Des Titans four-man tournament. He went on to lose to ONE Championship fighter Samy Sana in the finals. However, Laaouatni rebounded by winning the Partouche Kickboxing four-man tournament just two months later. The 27-year-old stopped Sofiane Zellit and Mohamed Mahfoud, each inside of two rounds, to take the tournament crown.

Daniels is fighting a kickboxing prospect who has yet to take the next step in his career. After his recent success against improving competition, Laaouatni has shown the type of promise to offer Daniels more than expected. This is a pivotal fight for both men. Laaouatni can make a name for himself with a victory over a top-10 welterweight in a championship bout with a global television audience. Daniels, meanwhile, can continue to cement his legacy as he gets to the age where he’ll start to consider retirement.

Daniels should claim the victory, but it won’t be a walk in the park. If he does win, then a rematch with Ghajji, who is also competing on this card, seems like the perfect next step for both men.

Heavyweight kickboxer Hesdy Gerges makes his MMA debut in the co-main event of Bellator 211. Will he find success, or will his opponent Domingos Barros spoil his move to a new combat sport?

At 34 years old, Gerges is making a late transition to a new sport. The experienced kickboxer is following a similar path to his wife, Denise Kielholtz, who is the current Bellator women’s flyweight champion and also competes under MMA rules. The Dutchman found success in the kickboxing ring with 50 career victories, including 23 by way of knockout. The former top-10 heavyweight holds wins over ranked opponents Andrey Gerasimchuk, Daniel Ghiţă, Igor Bugaenko, Ruslan Karaev and Pavel Zhuravlev. The former It’s Showtime heavyweight titleholder has hit a bump in the road in his kickboxing career, however, with losses in five of his last seven fights. Every loss came against a top-10 opponent, though.

Cape Verde’s Barros makes his promotional debut after four years of competition in the sport. The undefeated heavyweight enters the bout having won all five of his fights, including two by way of knockout. The 26-year-old hasn’t really been tested as of yet in his career, though. The combined mark of his opponents stands at .500 over a total of 22 fights. However, Barros is more skilled than his record may suggest. He’s comfortable on the feet and will work from the top on the ground. He won his debut with a slick rear-naked choke in a transition. The “Destruidor” hones his craft at the Porto Fight Club in Portugal.

Barros will be an intriguing test for the former heavyweight kickboxing champion Gerges. Barros has shown good head movement, a solid fundamental understanding of distance, and enough power to keep Gerges honest during exchanges. However, Barros will try to get this fight to the floor, which would obviously be his best chance for victory.

At 6-foot-6, Gerges will be the biggest and, by far, most experienced combat-sports opponent Barros has ever faced. If Gerges is able to fend off takedowns, then he can stretch this fight out or open up an opportunity to counter Barros as Barros rushes in. Gerges will be able to land shots if Barros remains content on the outside. This match harkens back to the days of striker versus grappler. However, Barros has closed the gap in the striking game more than Gerges could on the mat since transitioning to MMA, which means we could be in store for an upset.