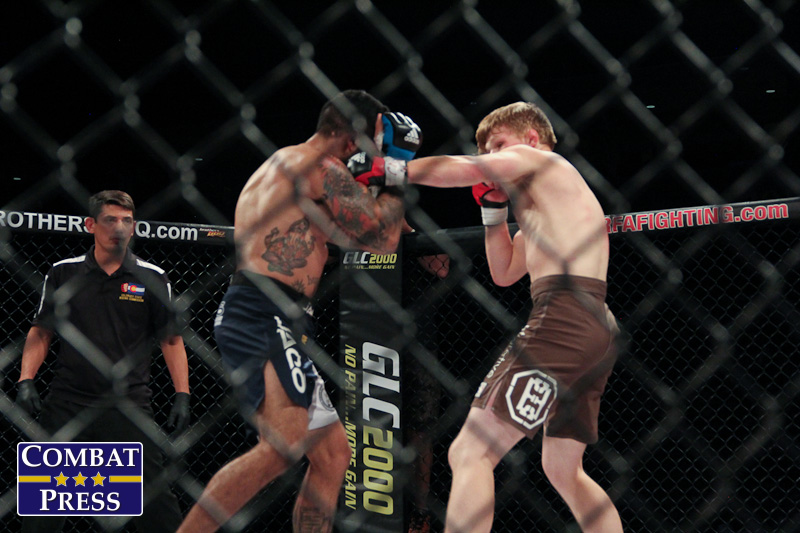 The show, which continues on its home on ESPN+, aims to give top prospects a chance to impress the UFC brass in an attempt to earn a contract with the company. The show’s second episode of the season takes place on Sept. 20 and streams live on ESPN+ starting at 8 p.m. ET.

I have really become of a fan of fighters out of the Evolucao Thai MMA gym in Brazil, the camp where Brunno Ferreira fights out of. Ferreira is a nasty power striker who is notably aggressive and has dynamite in every strike he throws. The man gets his opponents out of the fight early, never having gone to a third round. He has submission skills too, so he’s not exactly one dimensional. He takes on an unheralded Leon Aliu in his bout, which will be no easy task, but Ferreira’s violent style will definitely be on full display.

The flyweights always bring excitement, and nothing should be different here when Jafel Filho takes on Roy Echevarria. Both men have high-octane styles that will clash well to make the Fight of the Night here. Both men are tough as well, so it won’t be easy to finish either one of them. What you will get is to guys in the center of the cage throwing bombs and looking to put the other away. This is definitely a fight I am looking forward to.

Just 22 years old, Tajikistani grappler Nurullo Aliev looks to be the unheralded prospect on this episode. He has quality experience overseas for the AMC Global promotion in Russia, where he has dominated with his pressure wrestling and bullying style. The one thing that may hurt him is that he is a decision fighter, as all but one of his victories have gone to the judge’s scorecards. Dana likes finishes, so Aliev will have to kick it into overdrive when he fights Josh Wick.

This is a solid episode for talent and no single fighter really comes off as a guy that does not belong on the Contender Series. Of the ten fighters, Wick appears to be the longest of shots. Wick appears to be a late-notice replacement, so that already puts him at a disadvantage in this fight. He represents a solid team in Elevation Fight Team, so he will have good reps coming into this fight. He has solid mid-to-big-level MMA show experience, including a fight under Bellator, so the bright lights may not affect him. However, he has lost when he’s stepped up in competition a few times and his current opponent, the aforementioned Aliev, is going to be a tough out.

Scoring finishes that Dana White will appreciate, Nurullo Aliev, Brunno Ferreira and Austen Lane will all score contracts. We talked earlier about Aliev’s penchant for decisions, but he’s taking on a primary striker whose grappling is not even close the level of that of Aliev. Ferreira and Lane both score fun knockouts.

Lastly, Filho gets the contract being in a shallow division (flyweight) and winning the Fight of the Night.