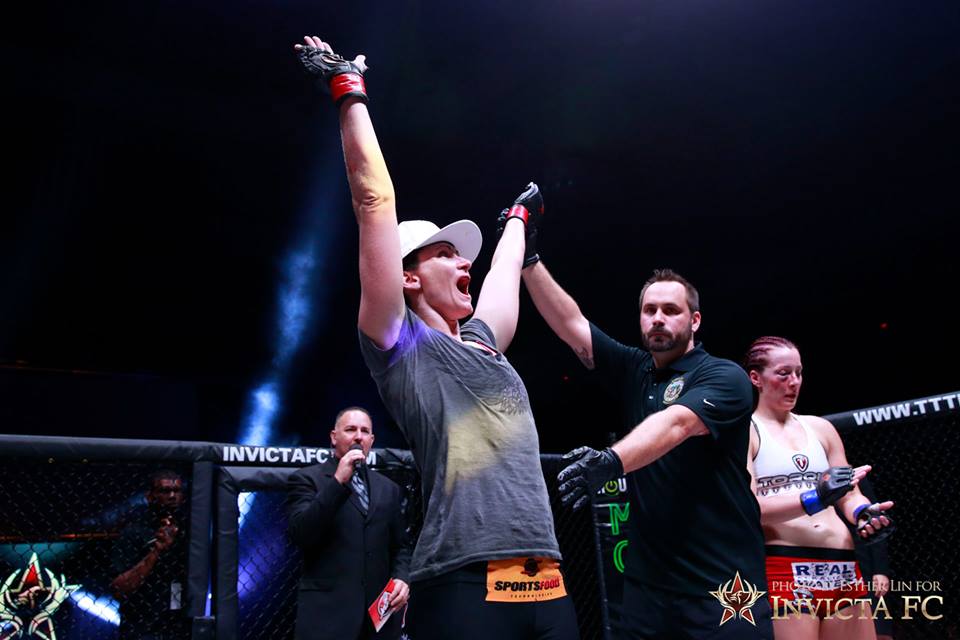 No matter what your philosophical approach might be in life, there’s no denying that some things are simply beyond our control.

Whether it’s the unexpected traffic jam that makes you late for a meeting or the snow storm that delays your flight, sometimes you just have to go with the flow.

As she prepared to take on Faith Van Duin at Invicta FC 10 in Houston in December, a medical concern identified by the Texas Department of Licensing and Regulation led to the fight being scrapped at the last minute.

“That was so frustrating,” exclaimed Tweet. “There is nothing worse than knowing you are healthy and not being able to fight. I do say that everything happens for a reason though. The results of the electroencephalography (EEG) coming back as they did prompted me to get an MRI immediately after I returned from Texas. I am happy to say that the results of the MRI came back clean.”

The situation in Texas was difficult for Tweet, her opponent and the promotion. The 37-year-old Canadian, dubbed “No So Sweet,” was hoping to build on the momentum of her first-round TKO over Veronica Rothenhausler at Invicta FC 8 in September. Despite nearly a decade of Muay Thai competition, the win was her first finish by strikes in MMA.

“To be honest, at that moment, I wasn’t even thinking about the TKO,” recalled Tweet. “I was more focused on the fact that, even though some might consider me to be too old to be in this sport, I was able to pump the brakes on a young up-and-comer’s knockout streak!

“Later, however, it was interesting to take a look at what happened in the cage that night and see a switch in my brain flip and really notice the ‘not so sweet’ part of my personality take over and go for the KO rather than the submission.”

The win was Tweet’s sixth career victory in the cage, and her sixth inside the first round. Her knack for ending fights both quickly and emphatically helped earn the Saskatchewan native something she never expected when she was dealing with the issues in Texas: a shot at the Invicta 145-pound title. She’ll square off with Brazilian titleholder Cristiane “Cyborg” Justino in the main event of Invicta FC 11 on Friday, Feb. 27, in Los Angeles.

“I was shocked at first because so many people thought that there was already an opponent picked out for her and, since I hadn’t heard anything previously, I certainly didn’t think it was me,” admitted the challenger. “I was expecting to be offered a fight with her, but I thought it would be later in the year and was more prepared for that to happen. When I heard the details of the entire weekend, though, I knew that this was the time to reach out and grab the opportunity that was hovering in front of me. I said yes immediately and hit the gym a few hours later.”

Tweet’s journey to a title shot has been long, and although it might have been slightly unexpected, the timing couldn’t be better. As a mother of two boys, her commitment to both family and fighting has always required a level of sacrifice for everyone involved.

“The balancing act has gotten easier as my children and I have gotten older,” explained Tweet with a laugh. “My oldest son is 18 and has a driver’s license, so I can rely on him to ease some of the stress by taking my youngest son to the places he needs to go. I have been lucky in that my fighting career has become the most hectic in the last few years. If it had been like this from the beginning, when my children were small, I’m not sure I would have been able to balance working full-time, training full-time and being a mom.

“I have to give a huge shout out to both my children, Joshua and Christian, for the sacrifices they have made in order for me to pursue my dreams. I hope I have been able to inspire them to chase their own dreams!”

Although Tweet was an IFMA world champion in Muay Thai, the Invicta gold would mean much more to her.

“Being Invicta champion would add a legitimacy to everything I have been doing for the past four years,” declared the Canadian. “I have always strived to be the best, and winning a championship is a great way to prove that one is the best at something.”

Her opponent, Cyborg, has not tasted defeat since 2005 and has scored back-to-back TKO wins inside the Invicta cage. Despite the accolades of the Brazilian, Tweet isn’t intimidated.

“I have the size, the skill, the strength and the experience that is needed to beat her,” she proclaimed. “My team and I have been preparing for a year and a half for her. Everything we have been working on, while training for my other opponents, has been with her in mind.”

With that preparation, Tweet enters the title fight with a level of confidence that few of Justino’s challengers have had in the past. Tweet believes it will be the fans that will see the biggest reward come Friday night.

“Never underestimate me. Challengers have a hard time taking a decision win from the current champ, so I will be finishing this fight prior to the fifth round,” she boldly proclaimed.

“The fans should expect a war. It’s going to be dirty, vicious and bloody, and we will probably both leave the cage looking worse than we did going in. Only, I will be leaving with a golden glow shining off my face.”