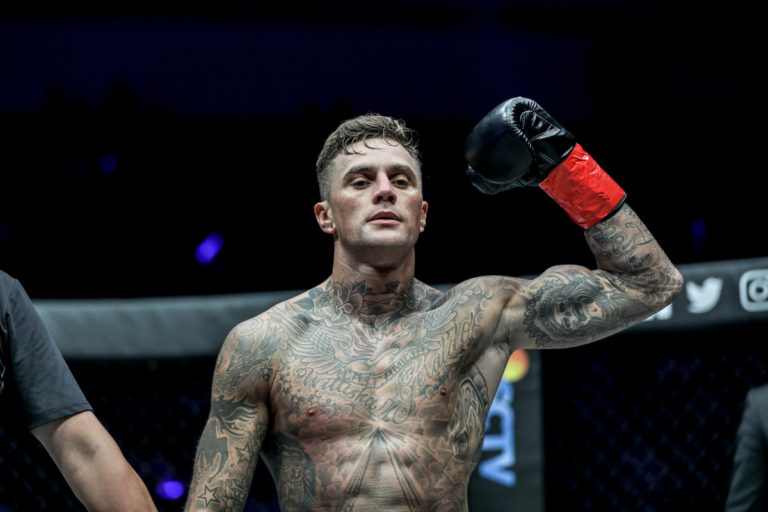 There are not a lot of things in this world that can buck the successes of multiple-time World and European kickboxing champion Nieky Holzken. In a combined 126 kickboxing and boxing battles, he has 17 losses on his record and has only been knocked out four times. The Dutch kickboxer, on the other hand, has knocked out 58 total opponents, and his most recent championship run had him winning and defending the GLORY Kickboxing welterweight title across four bouts. That run was after claiming the GLORY welterweight tournament twice – in both 2013 and 2015. He is as tough as nails, but several years ago, he met his ultimate foe.

Holzken’s wife Nathellie is a horse-riding enthusiast. Mr. Holzken, however, found out the hard way that he is not as much of a fan of driving the equine animals.

“I did it one time, but the horse almost killed me and I said I’d never go on it again,” Holzken told Combat Press. “He started running, and he didn’t stop. I mean, I was kicking him and doing it, but I don’t know what to do. So, when he stopped, I got off. I said, ‘never again.’

“It was a long time ago. I was on holiday with my wife, and she said ‘should we go ride horses?’ I said yeah. And the guy asked me – it was in Turkey – and he asked me, ‘can you ride a horse?’ And I said, ‘yeah, I’m a pro.’ And, I had never ridden one. So, he gave me a very fast horse, and then the horse goes bananas. I didn’t know what to do. You know, I was kicking in his stomach and he kept going harder. Harder, harder, harder, and then he stopped. I got off, and I said, ‘never again.’ It was a long time ago – I think 13 to 14 years ago.”

Well, even the casual rider would understand that kicking the horse likely made it go faster, but as Holzken stated, he had no idea what he was doing. And, that’s totally fine, as horseback riding is not for everyone. His wife and 11-year-old daughter Willisha enjoy their hobby of horseback riding, while his 15-year-old son Geraldo prefers to keep the horsepower in the gym, alongside his dad.

“Everything that I do, I do it for my family,” said Holzken. “And my son is very talented fighter also. He has 21 fights and 21 wins, so he’s going to follow me up. He’s very good. He’s like a little copy, you know?”

At 21-0, the younger Holzken is truly following in his dad’s footsteps. In fact, he currently holds a longer winning streak than the elder Holzken ever did as a pro. Nonetheless, the 38-year-old champ has had a fantastic career.

Holzken’s run with GLORY came to a close after GLORY 49 in Dec. 2017. It was the following year that he joined ONE Championship, and he immediately started making waves, picking up back-to-back wins in late 2018 and early 2019, which set him up for a shot at the ONE lightweight kickboxing title. He was given back-to-back shots at Regian Eersel’s title, but dropped both by unanimous decision. Since then, he has picked up two wins in a row over Elliot Compton and longtime veteran John Wayne Parr. He is back in the position of the top-ranked contender, and likes where he sits today.

“I feel like I should have been champion, man,” Holzken explained. “The first fight with Eersel was very unlucky for me that the knee was kind of like a knee to the groin, otherwise it was a spectacular KO on another level. I keep grinding, grinding, grinding, and I say I’m special breed. I’m still hunting for the title. I’m still number one in the rankings, and I want to defeat everybody who’s coming in front of me this year and the next year.”

Naturally, after two losses to Eersel, Holzken was happy to get back on the winning side of things. Eersel did less psychological damage than the aforementioned horse, but two wins in a row will help correct any mental ailment.

“It feels awesome, man,” admitted Holzken. “You do all the hard work for winning, and yeah, that’s life. You know, you cannot always win, and it’s not always successful. You know, you have higher moments and lower moments. But it’s not about how hard you fall. It’s about how hard you come back, you know? That’s not my mindset. I always try to come back stronger than when I finished.”

Holzken trains out of his own gym in his hometown of Helmond, Netherlands, and also does some training at a boxing gym and a strength-and-conditioning facility. But, the secret to his success is not just in his training. His life is all about maintaining a healthy machine. He’s the type of professional athlete that treats his body like a Ferrari.

“I always say I’m a special breed,” said Holzken. “I’m a new generation of a human being. Normally, fighters go 32 to 33 years, and then they are gone. But I keep my body so fit and so healthy that I can last as long as I want. I just live healthy and eat good. I try to rest good and always try to stay in shape. When I’m off camp, I try to be in 70- to 75-perecent good shape. So, when a fight comes up, then I only have to pick it up a little bit. So that’s my plan, and I eat very healthy. I think that’s the key.

“I eat a lot of protein, a lot of carbs, a lot of fruits, a lot of oats, a lot of nuts, eggs and a lot of water. I don’t drink sodas, and alcohol I drink minimum in a year. I just try to stay healthy, man.”

Holzken’s discipline comes in handy, as things can often change in the fight game. In fact, he had to make a quick pivot just in the last week.

It’s no secret that ONE Championship will be hosting the biggest event in combat sports history this week. ONE X is the tenth-anniversary event for the promotion, and it will feature 19 bouts across four different fighting modalities, as well as an additional Muay Thai-MMA mixed-rules bout. The event will take place at the Singapore Indoor Stadium, and, naturally, “The Natural” landed a spot on the card.

“I think it’s one of the biggest cards in kickboxing and MMA history,” Holzken stated. “I always say it in every interview – ONE established passion. What they doing, no other organization is doing that for fighters. It’s really crazy how they stood strong after all these bad years with coronavirus and everything. It’s crazy, man. I have much respect for ONE Championship. This is the card where I’m supposed to be. This is awesome.”

Well, Holzken was originally slated to face Russia’s Islam Murtazaev in a number-one contender bout for the ONE lightweight kickboxing division. Murtazaev was the most recent challenger to Eersel’s title, which he lost by split decision. This set up the fight with Holzken.

“After he fought Eersel, I wanted to fight him,” said Holzken. “He’s the guy who fought Eersel, so I wanted to fight him. He’s a strong guy. I think his conditioning was not very good in the last fight. But Eersel is very good at putting pressure on somebody, so that you get tired. It’s a nice fight, but I’m think I’ll be more successful than him.

“It will be a very technical fight from both of us. He’s very Muay Thai-oriented, and I’m more Dutch-style, and I think this will be a fantastic match up for the audience.”

Unfortunately, due to the global response to Russia invading the Ukraine a few weeks back, ONE Championship pulled three fighters from the card, including Murtazaev. Holzken was really looking forward to the bout, as it had title implications, but is ready to fight whoever they put in front of him. It was announced a few days ago that he will now be facing Thailand’s Sinsamut Klinmee in a Muay Thai bout. Regardless of who he fights, Holzken loves traveling to Southeast Asia to fight.

“It’s very cool, man,” Holzken elaborated. “The people are very great and so respectful. If you win or lose, they have so much respect for you as a fighter, and they look up to you. It’s really nice people. It’s different than my own people in Holland. You know, in Holland, you only have friends when you win, and if you lose, they say ‘oh he’s too old’ or ‘too ugly.’ But in Asia, it’s always respectful. The people are really, really great to compete in front of.”

While horseback riding might not be Holzken’s forte, he has no problem displaying his own horsepower in the ONE Circle. And, there is no better platform to showcase his kickboxing skills than at the historic ONE X – only now, he will be wearing four-ounce gloves. And, the way Holzken views it, he has one last big title run in him, and his fight this weekend is the first on a newly minted contract. After this contract is up, he might be done.

Klinmee is no opponent to sleep on, but Holzken has fought so many times – and lost so little – this one should be another day in the office. On Saturday, Mar. 26, live on ONE’s website, Facebook page and YouTube channel, ONE X: Part I will showcase Holzken vs. Klinmee as the seventh fight on the nine-fight opening card. And, Holzken has no problem calling his shot.

“The prediction is that I’m going to win in a very spectacular way,” said the Dutchman.