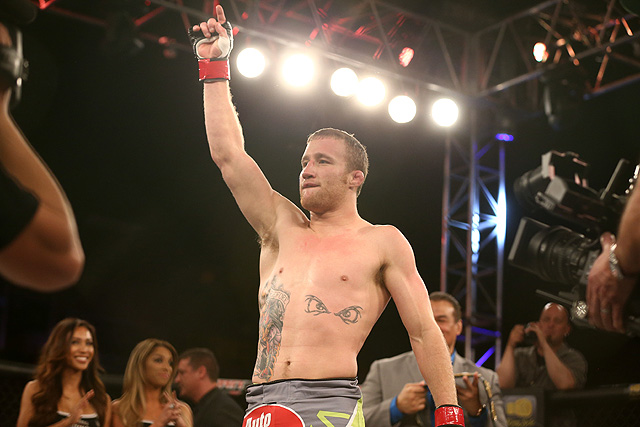 2021 saw an increased return of fans to arenas in MMA promotions around the world following the outbreak of COVID-19. This seemed to bring the best out of many fighters who would contribute to some outstanding fights.

Two contests that would steal the spotlight came late in the year. The first took place at UFC 268 in November. When Justin Gaethje vs. Michael Chandler was first announced, fans eagerly anticipated what would happen when two hard-hitting, explosive strikers with excellent wrestling pedigrees would meet in the Octagon.

Such was the appeal of this stylistic-match up, many fans had been calling for this fight to be put together as far back as Oct. 2020, when Chandler signed with the UFC. The fight would somehow end up exceeding expectations. The two fighters met in the middle of the Octagon and quickly started trading blows. Chandler got the better of the early exchanges and backed Gaethje up.

However, the former Bellator fighter became overzealous and started to get countered by Gaethje. Chandler was visibly fatigued after this and this allowed Gaethje to land heavy shots.

Gaethje hit an uppercut, which dropped Chandler in the second round, but he showed incredible toughness to survive. Chandler was still coming forward and throwing big punches, but his shots were now slower and more telegraphed. This allowed Gaethje to evade them fairly easily. Chandler looked exhausted in the third, and he resorted to taunting Gaethje in order to bait him into brawling.

Gaethje kept his composure, dominated the final round and secured the unanimous decision victory.

The second fight that captured the imagination of many fans took place just a week later. Yair Rodriguez was making his return to action after two years away and took on former champion Max Holloway in the main event of UFC Vegas 42.

Holloway was coming off his record-breaking performance against Calvin Kattar, where he landed a scarcely believable 447 total strikes. Many fans predicted that Rodriguez would end up on the receiving end of a similar beating, considering how inactive he had been.

To the surprise of many, Rodriguez delivered an excellent performance. His fast, powerful kicks caused Holloway problems throughout the contest. Both fighters sustained a high output for five rounds and used a variety of tools to inflict damage on their opponent. Rodriguez’s wide array of kicks were on show, while Holloway displayed a new weapon in his arsenal, executing some well-timed takedowns. Holloway persevered by unanimous decision, but he was pushed to the limit. The technical proficiency in this fight made it arguably one of the most high-level bouts in recent years.

In spite of this, the 2021 Combat Press Fight of the Year went to Justin Gaethje and Michael Chandler. While Holloway and Rodriguez delivered a masterclass in offensive striking, the sheer ferocity of the Gaethje and Chandler bout gives it the nod. The durability that both men showed to survive after being hurt has earned them a legion of new fans.