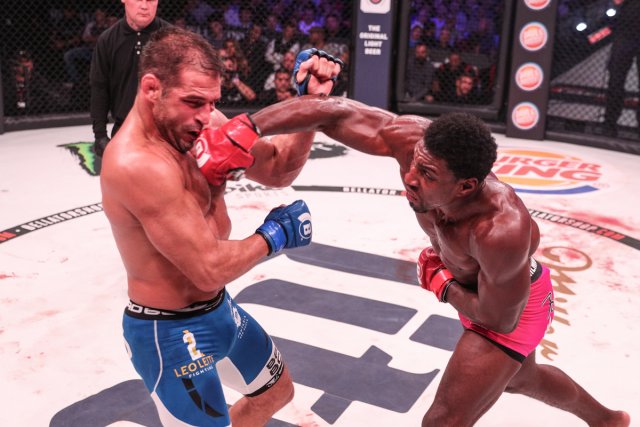 Bellator 266 goes down on Saturday, Sept. 18. After taking off the better part of a month, Bellator returns with fourteen fights, including a handful of intriguing storylines. The event takes place from the SAP Center in San Jose, Calif.

In the headliner, Yoel Romero looks to win over Bellator fans against the well-known veteran Phil Davis. Romero originally was not medically cleared to fight, but that drama has been cleared up since. On the other hand, Davis looks to bounce back after coming up short in his light heavyweight title fight against Vadim Nemkov. Both fighters can be unpredictable, and the match-up makes perfect sense.

Also, the co-main event features Neiman Gracie protecting the family legacy against Mark Lemminger. Gracie’s BJJ has been nearly unstoppable, but Lemminger’s wrestling should be an interesting counter. Lemminger has the opportunity to beat Gracie and excel himself into the Bellator rankings. After losing to Jason Jackson last time out, nothing seems more important than a win for Gracie. This is a must-see matchup for fans that enjoy creative grappling exchanges.

The rest of the fight card will feature a handful of upcoming prospects. Bellator has seemed to change their main focus, as they showcase seven fighters making their pro debuts. Other fighters to watch are Christian Edwards, Grant Neal, Jesse Delgado, and Khalid Murtazliev.

Bellator 266 will showcase the prelims on YouTube at 6 p.m. ET and the main card on Showtime at 10 p.m. ET.

Yoel Romero makes his Bellator debut against former champion Phil Davis; who comes away with a victory?

Expectations have been all over the place since Romero signed with Bellator. After losing his last three UFC fights, Romero needed a new home. At 44 years old, were his last three losses due to age or world-class competition? We will find out on Saturday night when Romero takes on Davis.

Since joining Bellator in 2015, Davis has built a Bellator record of 9-3. Unfortunately, Davis was unable to capitalize on his wins and beat Nemkov for the light heavyweight title. At 36 years old, his experience and power are there, while his athleticism slowly diminishes. Will Davis get back on track? Or prove that the Nemkov loss is the beginning of the decline in his career?

Romero vs. Davis is an interesting match-up that features several questions that need to be answered. Firstly, should there be a concern for Romero’s medical issues? No doubt Romero will always have that wild side to him, but can he keep up at 44 years old? Second, is the talent gap between UFC fighters and Bellator’s going to be exposed? Romero lost three in a row to end his UFC tenure, but how will he fare against a Bellator fighter who just fought for the title? The future of both fighters’ careers will be better understood after this fight.

If you’re looking to place a bet, the safer pick seems to be Davis. Romero is fighting in a new weight class and still needs to prove he has the skills to be a world champion. That being said, Davis has recently been sketchy with his low volume and lack of aggression. Romero’s wild fighting style should bring out Davis’s aggression and force him to look out for the finish. Do not underestimate Romero because his explosiveness and well-rounded fight style should still be there. All things considered, this fight is the perfect way to end Bellator 266.

Will Neiman Gracie successfully bounce back from his loss to Jason Jackson with a win over Mark Lemminger?

Gracie has always had pressure on him to succeed due to the family name. Luckily, Gracie has done a great job with nine submission wins during his 10-2 campaign. The only issue has been his inability to become Bellator champion, which is simply no easy task.

After losing to Rory MacDonald in a title fight, Gracie found himself one win away from another title shot after beating Jon Fitch. Unfortunately, Gracie lost a tough fight to Jason Jackson and found himself with a major setback. Gracie now looks to get back on track at Bellator 266 against Lemminger.

Lemminger will surely go into this fight underrated due to the Gracie name. However, his ability to improve and get wins has not gone unnoticed. At 28 years old, Lemminger holds a pro record of 12-3. Although Lemminger’s grappling has been the main focus, his hands have been quietly improving. Lemminger now has the chance to possibly launch himself into the Bellator welterweight rankings with a win.

Gracie needs a win here after losing to Jackson. Two losses in a row would be a major disappointment after being so close to becoming the champion. Despite Lemminger continuing to improve, he would really need to step up to get this win. Grappling could be an issue due to Gracie’s world-class BJJ and Gracie’s striking has also improved through his last few fights. Gracie should be able to take this one by decision.

The fight between Alejandra Lara and Deanna Bennett has been postponed twice; how does it play out once they finally square off?

Any fight that has been postponed twice has positive and negative impacts on the fighters. The negatives involve excruciatingly long fight camps that take a mental and physical toll. The positives include extra time to prepare for your opponent and work on weaknesses. Lara and Bennett has the potential to be an action-packed fight between a veteran with more experience than most in the division and an upcoming star looking to get back on track.

Lara came up short last time out in a split-decision loss to Kana Watanabe. At 27 years old, Lara has a Bellator record of 3-3 with tough opponents in nearly every bout. Although her skills are undeniable, the inability to beat the elite has been disappointing. With a win against Bennett, Lara will be back on track to another title shot in the future.

Bennett is an Invicta legend that also fought on The Ultimate Fighter. Whenever Bennett fights, you know she will give it her all and offer a solid test to any fighter. The problem has been beating the top-tier talent to make a name for herself. Bennett’s last fight was against Liz Carmouche, losing by submission in the third round. At 36 years old, Bennett needs this win to prove she still has gas left in the tank.

Lara will most likely come in as a favorite. The split decision loss to Watanabe surely angered Lara and made her eager to get back in the win column. Wherever this fight goes, Lara should be able to one step ahead and get the job done inside the distance.

The sleeper match-up comes from the featured preliminary fight between Grant Neal and Alex Polizzi. Most MMA fans will be picking Neal because of his undefeated record and Bellator reputation, but Polizzi should not be underestimated.

After starting his pro career with a record of 7-0, Polizzi joined Bellator in September 2020. His first two fights were extremely tough, winning one against Rafael Carvalho and losing to Julius Anglickas. Polizzi’s third fight was against Gustavo Trujillo, where he won by first-round submission and built up his hype. His combination of aggression and grappling made him stand out on the fight card. Polizzi now has the chance to skyrocket his value with a big win over the undefeated Neal.

Neal signed with Bellator in November 2019 and has been doing damage ever since. After wrestling in college, Neal made a quick transition over to MMA. Neal’s last two wins against Maurice Jackson and Tyree Fortune have been impressive, both by submission. The question is, how will he fare against the best light heavyweights in Bellator? Only time will tell, but first, he must prove himself against rising prospect Polizzi.

Neal vs. Polizzi is intriguing because the fight can play out many different ways. Both prefer to grapple, but their striking has improved massively. If the grappling cancels out, their striking could be the only path to victory. Both fighters have a tendency to get wild on their feet, making this fight potentially a must-see. Whoever wins this fight will emerge as the rising contender in the light heavyweight division.