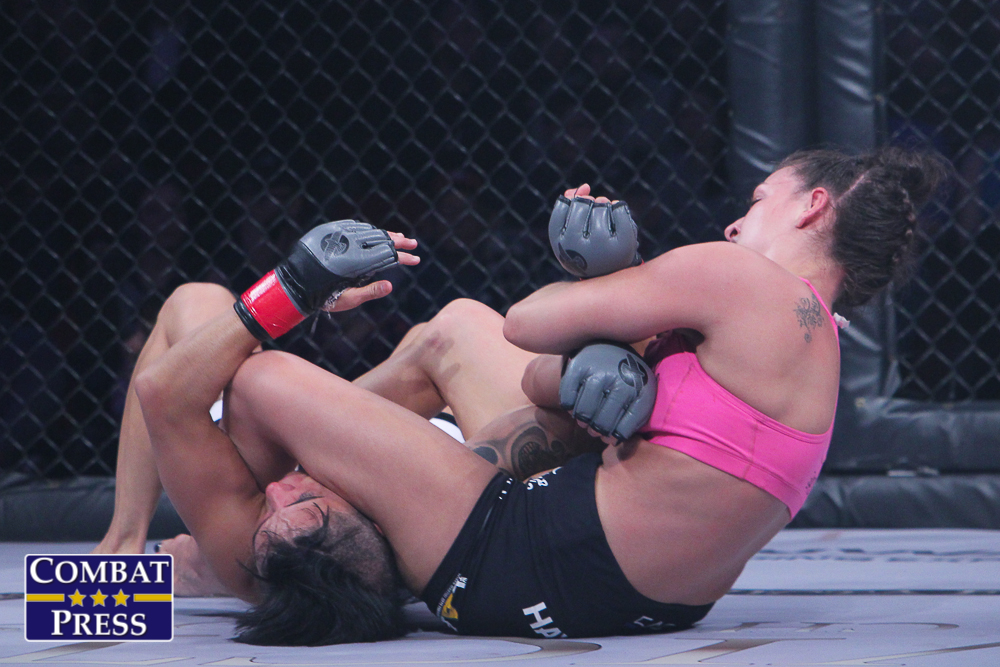 We had three women’s fights we looked at for this week, and two of them ended in round one.

At UFC on ABC 2, Mackenzie Dern needed just one round to submit Nina Nunes. Meanwhile, at Bellator 256, Diana Avsaragova made quick work of Tara Graff and Liz Carmouche took a decision from Vanessa Porto. In fights we didn’t preview from that same Bellator card, Talita Nogueira won a decision against Jessica Borga and Cat Zingano got the expected first-round submission of Olivia Parker.

Let’s take a look at the three fights we previewed.

Avsaragova knocked out Graff early in their clash. What can you really say about a fight that lasted just 29 seconds?

In my preview, I said that it appeared Avsaragova had power in her punches. I also pointed out Graff’s tendency to rush forward with her hands down. Well, what happened? Power met those low hands.

Avsaragova knew exactly what Graff was going to do, and she knew the hands would be low. She dropped Graff in a highlight-reel finish to a fight that was over quicker than you could say “Avsaragova”.

Graff clearly feels her advantages lie on the ground. I can relate. She just has to work on how to set up her takedowns. She’s in such a hurry that she sprints toward them instead of building up to them. But who am I to make suggestions like this? I would maybe consider competing in a boxing match or two, just to get used to having the hands up and jabbing in. It would really benefit her, because if she were to have gotten Avsaragova — and Valerie Loureda before her — to the ground, then who knows what might have happened.

Avsaragova made a statement on a big platform in highlight fashion that is going to be replayed over and over.

What is next for Avsaragova? The winner of the showdown between Valerie Loureda and Hannah Guy would make sense. However, if Loureda wins, then we are not likely to see that one put together. Bellator won’t risk slowing the build of Loureda like that.

I would lose credibility with the readers if I made any attempt to convince you this was an exciting fight. Carmouche topped Porto via unanimous decision in what was pretty much three rounds of “second verse, same as the first.” Yet, it is this style of fight that gives Carmouche the best chance of success. For her to do anything else would be unwise.

Fans want exciting fights. That’s great. I watch fights, and I, too, hope they are exciting. However, the goal is to win. When we as fighters have multi-fight contracts, it doesn’t mean we are automatically entitled to that many fights. We can be cut or move down the card with a loss, and we have escalators that state our next fight is worth more money after a win. Now, Carmouche obviously wasn’t getting cut with a loss, but she wants to move up the card. She wants to contend for the title and make more money. She knew where her advantage lied, and she smartly made the fight take place in that area.

There really isn’t much of a need for me to go through this fight round by round, because the rounds were the same. We mostly saw Carmouche put Porto against the cage. She wanted it down, but she did not rush it. She knew that she would be stronger in the clinch and could hold Porto there even without getting the takedown.

What could Porto have done to change things? Well, she could have used more offense when they separated. She wasn’t giving Carmouche a lot to think about. Carmouche was able to get Porto’s back to the cage without much fear of conflict. Had Porto thrown more, it might not have stopped the clinch from happening, but it absolutely could have delayed the clinch and given Porto a chance to score points.

Why would scoring points have helped? Listen, Carmouche was not doing a lot in that clinch from an offensive perspective. If Porto had landed some strikes and built up a little lead in the round, then Carmouche’s work in the clinch might not have been enough in the eyes of the judges.

Porto could have also been more offensive with her back on the cage. For a time, in round three, she was winning the round in this way. She was not landing particularly hard shots, but it was something.

What is next for Carmouche? Bellator might rush her into the next title shot against champion Juliana Velasquez, but I’d like to see her against Denise Kielholtz. Both ladies are coming off wins. They are ranked numbers two and three in the division. The winner could then move on to the title shot.

Dern defeated Nunes via armbar in round one of another quick and easy fight to break down. There wasn’t a lot to this one. Dern quickly got the takedown, went to mount, and got the arm. The tap came with seconds left in the round.

Nunes was really defending well. I even tweeted as much right before the tap. Maybe Nunes relaxed. It’s a natural instinct at times when you hear the round coming to an end. Whether on offense or defense, even though it’s a bad idea, there are times when you know there are just seconds left and say to yourself, “OK, save the energy for the next round.”

This was the first fight in almost two years for Nunes, and it came against the best it gets on the mat. It is going to sting for a bit, but she is still capable of doing damage in the division. I’d love to be able to sit here and critique what she could have done differently, but there really was nothing. She did what she was supposed to do to defend, but Dern is just that good.

Dern looked as good as she has ever looked physically. It seems she’s really taking her time outside of the cage as seriously as she ever has. She was in great shape, looked stronger, and was better at creating the takedown. While the fight wasn’t up for very long, she moved well while it was there. This wasn’t just a win, it was a statement.

What’s next for Dern?She needs to face someone higher in the rankings. How about Claudia Gadelha?

That’s it for this week. Sorry that it’s a little shorter than normal, but first-round finishes will do that.