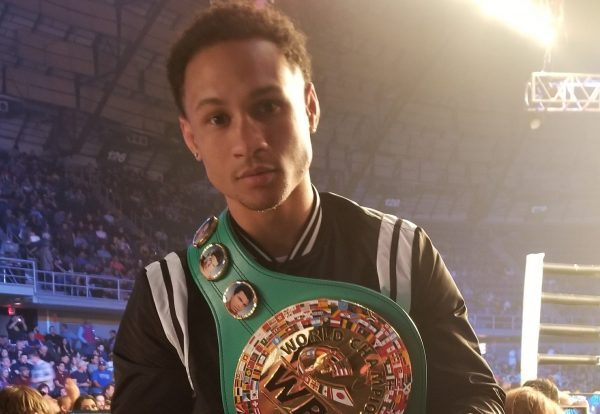 Regis Prograis: The One Who Made It

After a successful debut into the realm of boxing with a pay-per-view headlined by boxing greats Mike Tyson and Roy Jones Jr. “exhibitioning” it out, Triller Fight Club is back at it on April 17 at the Mercedes-Benz Stadium in Atlanta. The main event this time? Jake Paul, the embattled YouTube celebrity who’s amassed over 20 million subscribers, and former Bellator and UFC fighter Ben Askren, who somehow managed to turn a highlight-reel knockout loss into a payday.

Of course, if you want to see great boxing, that won’t be it. However, New Orleans native and former titleholder Regis Prograis can scratch that itch for boxing enthusiasts. He’ll seek to provide his own highlights after being given the chance to showcase the same skills that helped him become a champion.

“After my last fight, I was supposed to do the whole Al Haymon thing”, Prograis told Combat Press. “I was going to go with PBC, which that is still in the works, but my manager hit me up and [asked if I] want to fight Ivan [Redkach] on Triller.”

Prograis was down. He got the blessing of Haymon and moved forward with the new plan.

Triller is bound to draw an array of opinions. Some people hate it. Others love it. Some are just indifferent.

“Top Rank, ESPN [and the] Louisiana Commission, they shut it down. And now look, Triller is doing the exact same thing that we wanted to do two years ago. We wanted to bring in artists. We wanted to make it a show. So, the real boxing fans — my fans — would watch me and then Jake Paul and his fans, which is way more than mine, they’d be watching me. And the fans that don’t even watch boxing but see Justin Bieber, they’re gonna be watching. So, I think it’s just an overall good event.”

Get paid? Have a ton of people watch you fight? These are two things Prograis can scratch off the checklist that every boxer wants to accomplish in their career. An avenged loss is another good one to have on the resume, so why not sign with the promotion that has the fighter that put the first loss on your record?

“I’m still a free agent,” said Prograis. “I’m glad you asked that, because I see people on Twitter saying, ‘Oh, he got offered to go with Top Rank, and he didn’t. Why?’ See, the whole reason for that is the money.

“The money wasn’t good. I get paid more in one fight than I would get paid in two fights with Top Rank, and that was one thing, but [I also] want to be a champion again. I want to fight [Jose] Ramirez. I want to fight [Josh] Taylor. I want to be a champ again, and even with the money — look, the money was good, don’t get me wrong, but — they said it’s not a promise I would fight Ramirez or Taylor. So, it’s like, why would I sign with you? Who would I be fighting? It makes no sense to go with Top Rank, and even getting shorted with the money, if I would’ve got a guarantee to fight Ramirez or Taylor, I would have went that way.”

“I’m one of the people that made it,” he said. “The whole gym I go to in LA, nobody made it like I made it. I became a world champion and made a shitload of money, and I’m still making money. It feels great, and sometimes I think, ‘Why did I make it?’ I used to fight for free. I used to work. I had a big-time struggle coming up, but I always believed in myself and believed in my skills, even when I was fighting for free. I always came up the hard route. I had no choice but to go the hard route, and I still had a hard time coming up, but it makes me stronger. It builds character.”

If Prograis can get past Redkach, he intends to stay at 140 pounds, even if making weight his last fight was a bit of a struggle.

“The whole missing weight last time — I hadn’t had to make weight in a whole year,” Prograis said. “On top of that, that bubble thing. In a bubble, you can’t even leave the room. I had to work out in the room one day. It was terrible. All you could do is jump rope. But, right now, I want to stay at 140. I want to be a champion again at 140.”

Most boxers have a fight they really want. Some are willing to admit it, while others won’t. Prograis isn’t shy, though.

“The fight I always wanted was the Adrien Broner fight,” he admitted. “That’s a huge fight. It can do huge numbers if we fight, but if me and him fight for a belt, it’d be really huge. Like, say Ramirez and Taylor fight [and] one of them gets all the belts. After that, they’ll move up and vacate, and all the belts will be free. And, after that, me and Broner might fight for a belt. That’d be huge for 140. And it can happen at 147.”