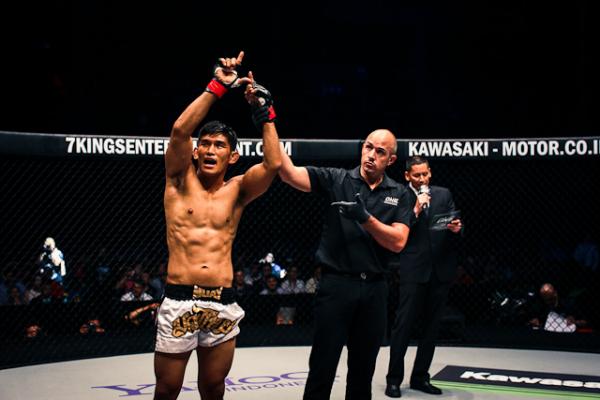 ONE on TNT IV Preview and Predictions

On Wednesday night, ONE kicks off its next trio of shows with live action once more. ONE on TNT IV is arguably the best lineup on paper since ONE’s very first TNT effort. It includes a title tilt where the undefeated challenger has once before snatched a championship from the reigning kingpin. It also provides a chance for Eddie Alvarez to erase the memory of a recent botched return to American television. Add in a heavyweight clash between two undefeated prospects and a trilogy fight between Shinya Aoki and Eduard Folayang, and the docket really is stuffed.

Reigning light-heavyweight champ Aung La N Sang assumes headlining duties, but he has a tough night in front of him. His challenger — on short notice, no less — is Reinier de Ridder, who defeated N Sang last year at a lighter weight to dethrone the middleweight as ONE champion. Now, de Ridder comes calling for the other piece of gold that belongs to N Sang. Will the Dutchman unseat N Sang for a second time?

Alvarez’s high-profile return to U.S. airwaves was infamously ruined when he landed several punches to the back of the head of opponent Iuri Lapicus. The fight was called off, with Alvarez initially handed a disqualification. ONE CEO Chatri Sityodtong turned around and declared that Alvarez would fight the winner of another recent TNT affair between Marut Gafurov and Rae Yoon Ok. While Gafurov appeared to be the expected victor there, South Korea’s Ok managed a career moment and came out on top to set up a potential star turn if he can get past Alvarez.

These two fights top a three-fight main card that also includes ONE darling Oumar Kane. “Reug Reug” has received a healthy push from the company as a potential future heavyweight star. He continues his journey against fellow prospect Kirill Grishenko, who is every bit the finisher as Kane.

Meanwhile, the three-fight lead card provides a setting for Aoki and Folayang to settle a rivalry that extends back nearly five years. Each man has had his hand raised once, but which man will walk away as the superior fighter this time?

ONE on TNT IV is the rare live show for ONE, which airs the second and third legs of each ONE trilogy on tape delay, and takes place at the Singapore Indoor Stadium on April 28. The action starts on B/R Live at 8:30 p.m. ET with the lead card, which also features a women’s Muay Thai contest and Colbey Northcutt in MMA action. The main card follows on TNT at 10 p.m. ET.

With Vitaly Bigdash out, Reinier de Ridder steps up for a rematch with Aung La N Sang for the light-heavyweight title. Is this rematch even necessary?

In October, de Ridder challenged N Sang, then a two-division champ, for the middleweight crown. The undefeated Dutch fighter became the first man to stop N Sang under the ONE banner and took the belt with a first-round rear-naked choke. This time, de Ridder is out to unseat N Sang as the light-heavyweight kingpin. His chances are good.

N Sang actually had a long run in the American regional circuit, where he experienced mixed results, before he became a stud fighter for ONE. The 35-year-old was set to decide a longtime rivalry with Bigdash before the change in opponents. In America, though, he had suffered plenty of setbacks, including ones to Costas Philippou, Uriah Hall and Jonavin Webb. At this point, it seems as if the reigning champ has benefitted from favorable fights inside the ONE organization.

Of course, de Ridder flips the script on this trend. He had a fairly easy time in the pair’s first outing. Perhaps Sanford MMA has N Sang more prepared for this rematch, but de Ridder’s grappling could still prove to be far too much for a man who now has three submission losses on his record.

This is a huge opportunity for de Ridder to punctuate his rise to the top of the ONE organization with a second finish of a company star.

Just weeks removed from a no-contest that spoiled his return to American television, Eddie Alvarez gets a chance to shine once more when he meets Rae Yoon Ok. Will Alvarez succeed here?

The former UFC champion just can’t catch a break. First, he lost his ONE debut to Timofey Nastyukhin in stunning fashion. Then, after a rebound win, he was involved in a debacle that resulted in an immediate disqualification loss for strikes to the back of opponent Iuri Lapicus’s head that eventually became a no-contest. Now, ONE has lined him up with Ok, a South Korean fighter fresh off a somewhat surprising victory over Marut Gafurov.

By now, Alvarez has to be wondering what kind of nightmare he’s in. The 37-year-old started his ONE tenure with a shocking loss, dealt with an ankle injury in 2019, had his first fight of 2020 scrapped due to the COVID-19 pandemic, and then returned with the Lapicus incident. Given Alvarez’s long history, this has to add fuel to the fire for him.

Ok is a dangerous opponent, though. He can be stopped, as Yadong Song proved six years ago, but he’s also a spoiler of sorts after his win over Gafurov. However, this is still Alvarez’s fight to lose. He should sport the better all-around game, and his boxing could allow him to follow in Song’s footsteps with a knockout of Ok.

There are two strong contenders here.

First, there’s the heavyweight clash between Oumar Kane and Kirill Grishenko. ONE seems intent on making Kane a star, and he’s made the promotional push easy so far with two first-round stoppages since joining the company. Grishenko has the same number of fights on his record, but two of those contests came in a single night, and the remaining one took place just one month earlier. Both men are still green, but they have a combined 100 percent finishing rate and could make for fireworks on Wednesday night.

The other sleeper is the lead-card trilogy fight between Shinya Aoki and Eduard Folayang. These guys are a contrast of styles — Aoki as the grappler, and Folayang as the striker — but each has managed one win in their career series. In 2016, Folayang blasted Aoki for a third-round finish via strikes. In 2019, Aoki returned the favor with a first-round submission. Aoki has become a better striker over the years, but the outcome of this contest still hangs heavily on Folayang’s ability to keep the fight upright.