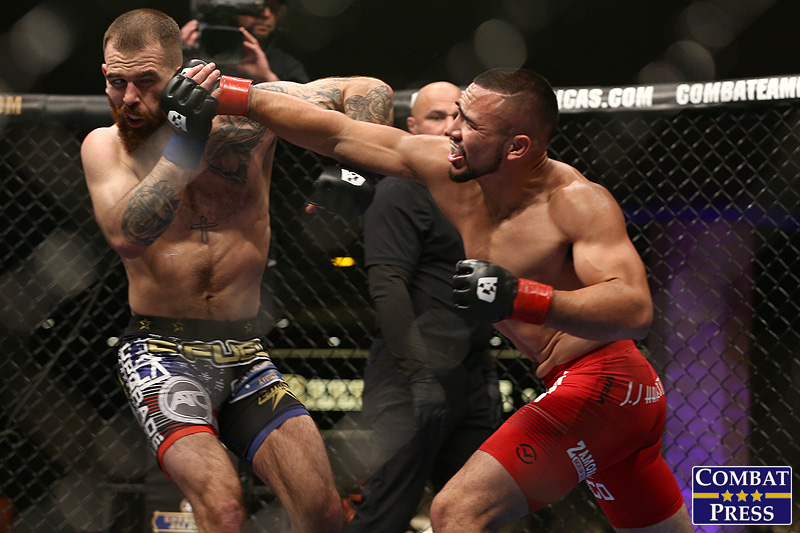 The Legacy Fighting Alliance heads back to Minnesota for its 82nd show. The headlining bout is a title tilt between Alex Polizzi and Jamal Pogues, but supporting players Jake Childers and Nate Richardson are worthy of attention as well. Childers is undefeated through seven pro bouts, and now the featherweight prospect looks to make it eight when he clashes with Richardson, who has only lost once in his pro MMA campaign.

The 31-year-old Childers opted for a long stint at the amateur level, where he compiled a 14-4 record. “The Working Man” finally made his pro turn in 2017. He stuck to low-level competition, including a 10-14 opponent, through his first five pro fights spanning a number of different promotions. Childers made his first LFA appearance in a February 2019 win over prospect Josh Marsh. His next two contests fizzled before he returned in June and met Jamey Simmons at LFA 70.

Richardson continues Childers’ trend of slowly increasing his level of competition. “The Natural,” who fights out of Minnesota and originally hails from Liberia, suffered his lone MMA loss in a 2012 fight against Damion Hill. He made his promotional debut at LFA 43 in 2015 and won three straight with the organization. Richardson has also dabbled in kickboxing, with several appearances in the GLORY ring. The Cellar Gym representative found little success with the organization, however, going 2-3 through five GLORY contests. His most recent kickboxing appearance came against Asa Ten Pow a year ago at GLORY 63.

While Childers does have several ammy losses, they’ve hardly come against bad fighters. Justin Wetzell has gone on to post five wins over six pro fights, Cain Lugar is now 3-1 as a pro, and Childers avenged his loss to Jared Richardson, who is now 7-1 at the amateur level. Only Brent Lee, who is 0-1 as a pro, hasn’t found sustained success.

The Illinois-based Childers tends to hunt for the submission, but he scored a huge knockout over Simmons when he landed a knee in just 13 seconds. He’s a strong wrestler, but he does have to be careful when he shoots for a takedown. He can get careless and leave his neck out there for the taking. Childers is a solid grappler who has recorded four tapouts as a pro.

Richardson is more of a pure striker, as his foray into kickboxing would suggest. GLORY lists his overall kickboxing mark at 12-5 with six knockouts. His best chance will be to keep this fight standing and use his more technical approach to get the better of Childers, who tends to wing his punches in while leaving himself open to counters.

Despite Childers’ striking approach, he’s been pretty effective on the feet. That said, he’ll be on the hunt for the takedown in this contest. Richardson might have trouble defending against such a relentless wrestler. The fight will eventually hit the canvas, where Childers will find a submission for the victory.

Combate’s trip to Mexico for its 55th event features an excellent title tilt at the top of the lineup. Lightweight kingpin Rafa Garcia is set to defend his championship against Humberto Bandenay, the winner of Combate’s recent one-night Copa Combate 2019 tournament.

The 25-year-old Garcia, who was introduced to MMA at age 13 by his father, debuted in 2014 and picked up four wins before joining the Combate roster via the league’s open tryouts. His promotional debut came in early 2017 when the “Gifted” one needed just 64 seconds to find a heel hook for the submission victory over Raúl Najera Ocampo, who had entered the bout as a 4-1 prospect. Garcia, who has a background in high school and college wrestling, continued his run with a second-round submission of .500 fighter Marcos Bonilla and a majority decision over Chase Gibson. Over his last four fights, the Team Punisher product has added a first-round knockout of Bellator and World Series of Fighting veteran LaRue Burley, a submission of Edgar Escarrega, a submission of UFC vet Estevan Payan, and a decision nod over longtime Combate staple Erick Gonzalez.

Bandenay held a 15-7 record heading into Copa Combate 2019. He was also just one fight removed from a three-fight skid that led to his UFC ouster. Nobody could be blamed for anticipating that he couldn’t make it through three foes in a single night. Yet, he proved his doubters wrong. The 25-year-old decisioned Hugo Hernando Prada, knocked out Jose Luis Verdugo, and decisioned the aforementioned Gonzalez to take the tourney crown. The Peruvian fighter’s resume also includes a victory over Martin Bravo in Bandenay’s UFC debut. He has a balanced set of finishes that includes seven knockouts and six submissions.

Garcia has a plus ground game and the wrestling skills to easily plant most opponents on the mat. However, he’ll give up six inches in height and three and a half inches in reach to Bandenay. Garcia’s best work comes on the canvas, where Bandenay has faltered on several occasions.

As Copa Combate 2019 showed everyone, you can never say never when it comes to Bandenay. However, he opted to train in his homeland for this contest and might not have been pushed as hard as he needed to be in order to prepare for the immense challenge in front of him. His past ups and downs are a concern too — he even suffered a submission loss to a sub-.500 opponent.

Garcia has taken wins over quite a few quality opponents in the last year or so. While the champion-versus-champion aspect of this affair should excite everyone, it’s likely that Garcia will walk away with the belt after tapping Bandenay.

Ivan Shtyrkov is one of the most successful prospects outside of the UFC. He almost made it into the Octagon in 2019, but a failed drug test led to a parting of ways between the Russian fighter and the world’s largest MMA promotion. Instead, Shtyrkov has returned to his roots. After a brief stop with Rizin, he’s been back under the Russian Cagefighting Championship banner, where he’ll now meet Michał Pasternak on a card that also features a four-man lightweight tournament that is part of the Professional Fighters League International Qualifier Series.

Shtyrkov’s career has been spent competing primarily under the German Titov Boxing Promotions and RCC Boxing Promotions banners in Russia. He’s faced several notable names along the way. At heavyweight, he encountered UFC veteran Jeff Monson and scored a controversial submission win. Shtyrkov topped his next two opponents, including former UFC champ Ricco Rodriguez, via first-round TKO. This led to a meeting with UFC vet Antonio “Bigfoot” Silva. The 31-year-old couldn’t stop Bigfoot, but he did earn the victory on the scorecards. Shtyrkov added UFC veterans Rodney Wallace and Phil De Fries to his list of victims. Then, he used his fists to pummel veteran Japanese fighter Satoshi Ishii for another stoppage victory. Late in 2017, he turned his focus toward the light-heavyweight division and topped former Bellator champ Christian M’Pumbu and European veteran Marcin Łazarz. In a shift back to heavyweight, Shtyrkov fought to a draw with 60-fight journeyman Gerônimo dos Santos. He tilted the scales at 215 pounds for a catchweight contest against UFC veteran Fabio Maldonado, who succumbed to strikes in the second round, and then returned to light heavyweight for a submission victory over UFC veteran Thiago Silva and a TKO of Rizin foe Hoon Kim. In his first foray into the middleweight division, Shtyrkov finally suffered a loss when he was submitted by Yasubey Enomoto.

The 35-year-old Pasternak made his pro debut in 2012 and shot out to a perfect start through 11 outings, including his ONE Championship (then ONE FC) debut. After registering a decision nod over Rafael Silva, the Polish fighter was inserted into a light-heavyweight championship contest opposite Roger Gracie. Pasternak came up short and then dropped a decision in his next fight against Aung La N Sang. After a rebound win in his homeland, Pasternak returned to ONE and lost to Leandro Ataides. He has bounced around the European regional scene for his three most recent bouts, which includes two winning performances.

Well, the experiment of a middleweight fight didn’t work out so well for Shtyrkov. Enomoto, a good-but-not-great journeyman, was able to secure a choke in the second round to finish the Russian. Now back at a more appropriate weight, Shtyrkov should shine once again.

Pasternak’s recent setbacks are a sign that he’s possibly reached his ceiling. Unfortunately, Shtyrkov resides on the next floor up. The Russian has been bolstered by taking on past-their-prime castoffs from the UFC and Bellator, but he’s also capable of beating men like Pasternak when he’s not forced to cut too much weight. The 31-year-old should edge Pasternak on the scorecards.