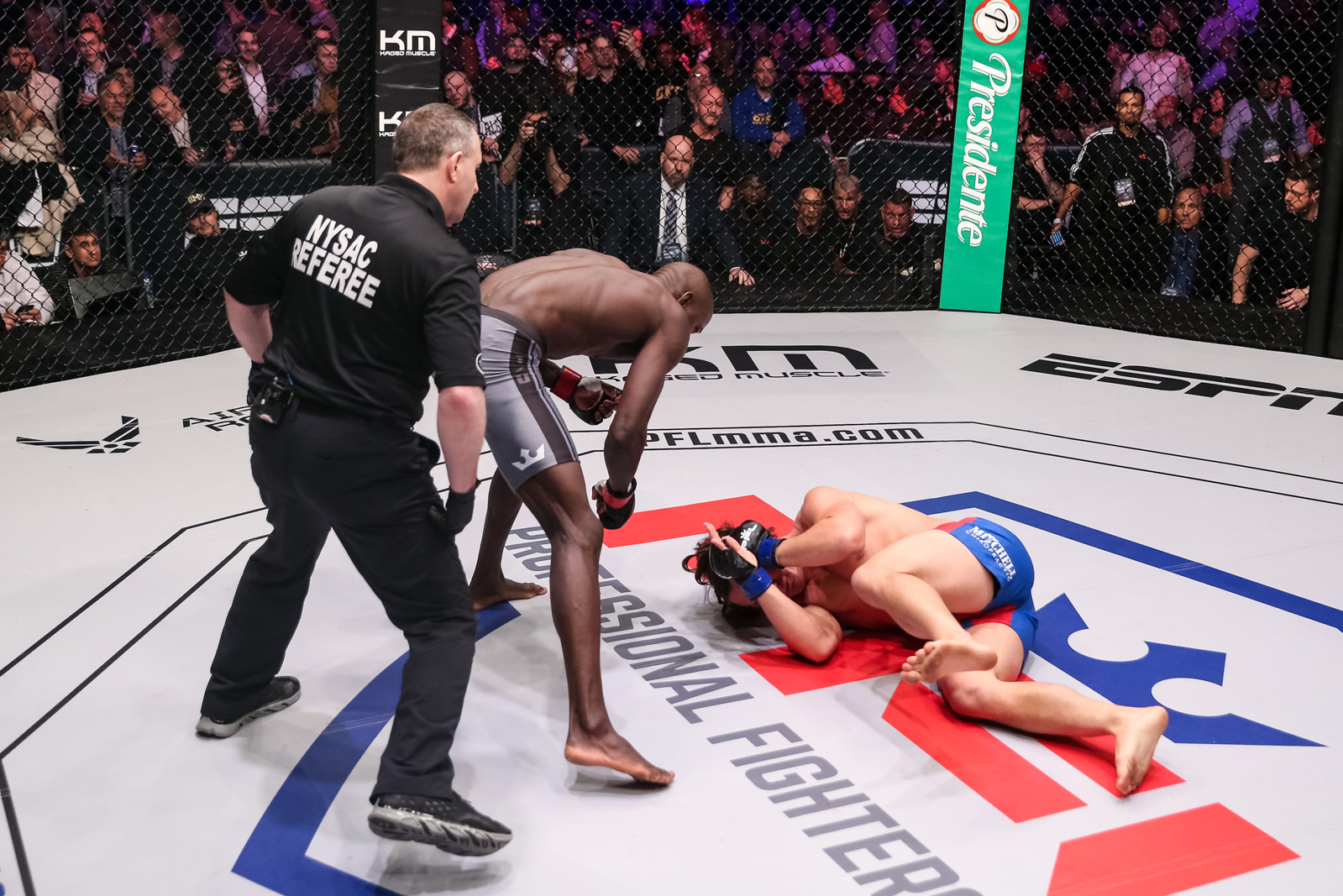 The 2019 season is now underway for the Professional Fighters League. It all started last night in New York, where Kayla Harrison and the women’s lightweight division shared the bill with 2018 champion Magomed Magomedkerimov and his fellow welterweights.

The PFL’s season format includes standings that determine which fighters make it to the playoffs. Extra points go to competitors who score finishes. Of course, not every win is equal, nor is every loss. For this reason, we here at Combat Press will track the PFL divisions throughout the regular season by way of power rankings, intended to provide an insight to how these fighters looked in an individual fight and how it projects on their momentum and future progress through the season. Here’s how the women’s lightweights and men’s welterweights stack up after one event.

1. Sarah Kaufman (1-0, 6 pts, No. 1 in standings): What size difference? The Canadian is definitely the most decorated mixed martial artist in this competition, but she also entered as by far the smallest. Kaufman stands 5-foot-5 and typically competes at 135 pounds. She gave up three inches in height and five inches in reach to Morgan Frier, but the former Strikeforce and Invicta champion demonstrated the value of experience and squashed her opponent with a first-round submission.

2. Kayla Harrison (1-0, 3 pts, No. 2 in standings): The Olympic gold medalist judoka is PFL’s centerpiece in this tournament, but her season opener against Larissa Pacheco went the distance. That’s hardly the best news for the undefeated star, who had disposed of all her previous foes before the final bell. Harrison did dominate Pacheco on the ground, though, and remains an early favorite to take the championship in this division.

3. Bobbi-Jo Dalziel (1-0, 3 pts, No. 4 in standings): The 33-year-old had not been very active in recent years, but she is another undefeated fighter in this division. Dalziel didn’t run away with the victory over Genah Fabian, but she displayed strong striking and clinch work en route to the judges’ nod. Dalziel appears to have the strength and range to give Kaufman fits, and she could be a tough fight for Harrison as well.

4. Genah Fabian (0-1, 0 pts, No. 5 in the standings): The decorated Muay Thai practitioner returned to MMA action for the first time since 2015, and she looked strong, even in defeat. Fabian was bested by Bobbi-Jo Dalziel, but it was primarily a stand-up war that proved the 29-year-old has a chance against all but the best in this field. It would be a shock if she doesn’t pick up a few victories as the season progresses.

5. Larissa Pacheco (0-1, 0 pts, No. 7 in the standings): The 24-year-old Brazilian, a UFC veteran and The Ultimate Fighter alum, seemed like one of the biggest threats to Kayla Harrison in this field, but Harrison dispelled that notion by controlling Pacheco on the ground to ride out the decision win. Pacheco did take Harrison’s back at one point, and she also threatened with some triangle attempts. She deserves plenty of credit for putting Harrison in some danger and surviving to the final bell.

6. Roberta Samad (1-0, 3 pts, No. 3 in the standings): The 31-year-old Samad, in her first appearance since 2015, picked up a win over Moriel Charneski. However, it was hardly the most impressive showing. Samad, a skilled grappler, looked sluggish and sloppy on the mat at times, and Charneski, a sub-.500 fighter, never looked completely overwhelmed. Perhaps Samad, whose layoff came as a result of having a child, just needed to shake off the ring rust. As it stands right now, she looks pretty vulnerable against a large segment of this pack.

7. Moriel Charneski (0-1, 0 pts, No. 6 in the standings): Not too shabby for a fighter who entered this competition two fights below the .500 mark. Charneski held her own against a rusty Roberta Samad, but it could prove to be the easiest fight of her PFL run.

8. Morgan Frier (0-1, 0 pts, No. 8 in the standings): Nobody really expected Frier to win her fight against Sarah Kaufman, but she found no way to use her length to stymie the former Strikeforce and Invicta champ. Frier has a lot to prove moving forward.

1. Magomed Magomedkerimov (1-0, 6 pts, No. 3 in the standings): The 2018 champion picked up where he left off. Magomedkerimov completely dominated UFC veteran John Howard before getting the first-round guillotine for the finish. The 29-year-old has been a true standout for the PFL, and he looks well on his way to continuing that run in 2019.

2. Sadibou Sy (1-0, 6 pts, No. 1 in the standings): It took a mere 17 seconds for Sy, who competed as a middleweight in the 2018 season, to put his name at the top of the standings. The Swede’s career mark might not turn heads, but his finish of David Michaud could be the start to a breakout year for someone who managed just a 1-2-1 campaign in the PFL’s inaugural season.

3. Ray Cooper III (1-0, 5 pts, No. 4 in the standings): Magomed Magomedkerimov may have won the 2018 welterweight championship, but it was Cooper who garnered most of the attention with knockouts of Jake Shields (twice), Pavel Kusch and Handesson Ferreira en route to the title fight. Well, the Hawaiian is back at it again. He dispatched of his second cousin, Zane Kamaka, in the second round of their affair via rear-naked choke.

4. Glaico França (1-0, 6 pts., No. 2 in the standings): França put up a strong showing against the formerly undefeated Gamzat Khiramagomedov and walked away with a first-round submission finish. The Brazilian disappointed in the UFC as a lightweight, but he appears to have found his home at 170 pounds.

5. Chris Curtis (1-0, 4 pts, No. 5 in the standings): Curtis, a CES MMA regular and Dana White’s Tuesday Night Contender Series alum, showed off excellent boxing skills and killer instinct in his fight with Andre Fialho. The southpaw landed the straight left seemingly at will, scored several knockdowns of Fialho over the course of the fight, and did not let his opponent off the hook in the third round. Curtis is in a stacked field, but from the looks of it, he can hang.

6. Handesson Ferreira (1-0, 3 pts, No. 6 in the standings): Ferreira was the better man in his fight against the tough Bojan Velickovic. However, he went the distance on a night when many of his fellow welterweight winners destroyed their opponents.

7. Bojan Velickovic (0-1, 0 pts, No. 7 in the standings): The Serbian fighter has had a very rough patch since 2016, and things didn’t get easier in his 2019 season debut against Handesson Ferreira. Velickovic, who went just 1-2-1 in the 2018 season, failed to get his offense going against the aggressive Brazilian.

8. Andre Fialho (0-1, 0 pts, No. 8 in the standings): Fialho tried to throw heavy leather in his fight with Chris Curtis, but the Portuguese fighter was simply outclassed. Fialho has now shown signs of struggling against Curtis and Chidi Njokuani. Meanwhile, his biggest win came against Javier Torres last year under the Bellator banner. He could be in for a rough ride this season.

9. Zane Kamaka (0-1, 0 pts, No. 9 in the standings): It sure doesn’t help when you miss weight by two pounds and lose the ability to pick up any points, regardless of how well you perform. Ultimately, it didn’t matter, as Kamaka was finished by his second cousin, Ray Cooper III. The Hawaiian’s only saving grace was in how poorly three other men in the field did on Thursday night.

10. Gamzat Khiramagomedov (0-1, 0 pts, No. 11 in the standings): The 25-year-old Russian entered the season as an undefeated stud with big victories overseas against Alexey Butorin and Jae Young Kim. He didn’t fare so well when he ran into Glaico França. The combat-sambo specialist was submitted in the first round, and the holes França exposed in his game will certainly be targeted by others in this field.

11. John Howard (0-1, 0 pts, No. 10 in the standings): Howard was another member of last season’s middleweight group who opted to try his luck at welterweight in 2019. He had the unfortunate assignment of meeting last year’s champion, Magomed Magomedkerimov, to open the season. Of course, that meant another ugly showing for Howard, who was taken down early and dominated en route to a first-round submission loss.

12. David Michaud (0-1, 0 pts, No. 12 in the standings): Cowering on the mat is not a good look for anyone. Michaud was left in that spot following a body kick delivered by Sadibou Sy just 17 seconds into their fight. Michaud figures to ultimately end up somewhere in the middle of the pack, but he definitely suffered the most humiliation of any welterweight on Thursday night.