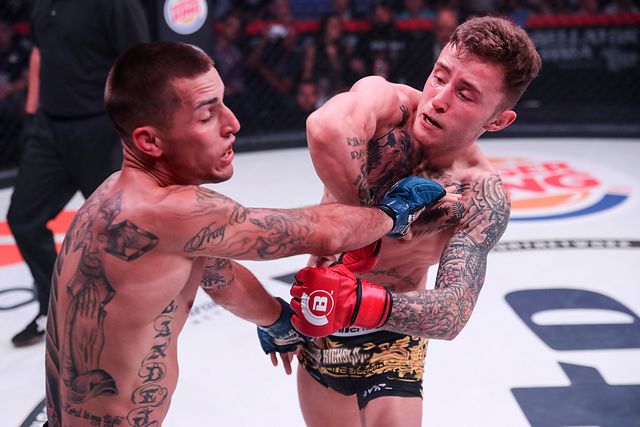 Bellator MMA heads overseas to Dublin, Ireland, and the 3Arena for Bellator 217 on Saturday, Feb. 23.

The headliner features Irish bantamweight prospect James Gallagher against Steven Graham. Gallagher ran into a little trouble in his last fight, where he was knocked out by Ricky Bandejas in the first round. Before the loss, Gallagher had won seven straight fights to start his professional career. Graham is currently on a five-fight winning streak, with four of those victories coming by either guillotine or rear-naked choke.

The co-main event will go up two weight classes to lightweight, where Peter Queally and Myles Price take to the cage. Queally rebounded in his last fight when he beat David Khachatryan by first-round knockout. Price, on the other hand, lost by decision to UFC veteran Norman Parke in his last outing.

The preliminary card airs on Bellator.com at 7 p.m. ET. The main card airs on the Paramount Network at 9 p.m. ET.

James Gallagher is coming off a loss, but he’s the evening’s headliner. Can he right the ship and justify Bellator’s confidence in him when he meets Steven Graham?

Yeah, this is definitely Gallagher’s fight to lose. We are talking about Bellator’s top Irish prospect, fighting on Irish soil and coming off of loss that didn’t completely derail a hype train, but, maybe, will cause it to arrive late at the station.

Even with a loss against Graham, Gallagher, 22, will still be one of Bellator’s prospects to watch. Much like Aaron Pico, he is still young enough to overcome a loss. Not everyone can have a career arc like A.J. McKee Jr. and rattle off 13 consecutive victories out of the gates. Success isn’t defined by a straight line, but by the peaks and troughs a person goes through. Bellator will have confidence in Gallagher before this fight and the company will continue to have confidence in him after the fight.

Lucky for Bellator, Gallagher will walk out of this fight successfully and with another victory under his belt. The Irishman was knocked out in his last fight, but we won’t see a repeat in this one. Gallagher had been improving steadily over the course of his career and coming into his own on the feet. Before the loss to Ricky Bandejas, Gallagher had choked out six of his seven opponents. He had logged first-round victories over Chinzo Machida and Kirill Medvedovski in Bellator. We should expect more of the same here.

Gallagher will get back to basics. He should put in some work on the feet and look for an opportunity to take the fight to the ground. Once on the mat, he’ll seek the rear-naked choke that has brought him victory in the past. Gallagher will have to be careful if he does go for the takedown and not leave his neck exposed to Graham, who has scored three of his six victories by way of guillotine choke.

Is the preliminary card of this show actually more “stacked” than the main card?

Bellator’s international cards definitely suffer from a lot of weird decisions, and this isn’t any different. The company made the right call by headlining a card in Ireland with someone like James Gallagher in a fight that is his to lose, but this card could have really been stacked more overall. The problem is that Bellator runs its roster very thin and doesn’t really utilize its higher-paid fighters so much. Then, you have problems like this, where the main card can be looked over outside of one fight.

The preliminary card does have an advantage in terms of better fighters. The women’s featherweight fight features Olga Rubin, who is one of the better fighters in the 145-pound division. Rubin is currently sitting with an undefeated record and could possibly be up very soon for a title challenge. Her original opponent was Sinead Kavanagh, who was one of the bigger signings for the women’s divisions for Bellator, but Kavanagh was forced out of the contest with an injury. Now, Rubin will meet Iony Razafiarison instead. Razafiarison has only lost once in seven fights, and she holds a win over Kavanagh.

Of course, that’s just one fight on a preliminary card with a better quality of fighters. The undercard is filled with a lot of European prospects Bellator can utilize. Even if you don’t want to look at a prospect fight featuring Kiefer Crosbie, who currently sits at 5-0, there are also contests utilizing more seasoned fighters like Walter Gahadza and Ruben Crawford. Gahadza is 1-3 in his last four fights, which explains why he’ll fight on the prelim portion of Bellator 217. However, before this weird run, the 31-year-old had won 15 straight fights. Crawford, meanwhile, has been on the sidelines since 2016.

Bellator is very weird in what it does with its lineups, especially when the company travels overseas for cards like this one. This card isn’t as egregious as others — most fans might only tune in for Gallagher’s fight anyway — but it’s worth the mention that Bellator is doing weird Bellator things again.

Shaun Taylor and Will Fleury.

Taylor has been through a couple of long layoffs in his career. He enters the cage for the first time in a little over a year against Fleury. Taylor has been an interesting fighter whose lone loss came against Leon Edwards, who is now on a six-fight winning streak in the UFC. That’s a pretty excusable loss. Otherwise, Taylor has finished seven of his eight victories. Fleury will look to end the fight early. Three of his victories have come by early stoppage. This includes his victory in his professional debut against another fighter on this card, John Redmond.