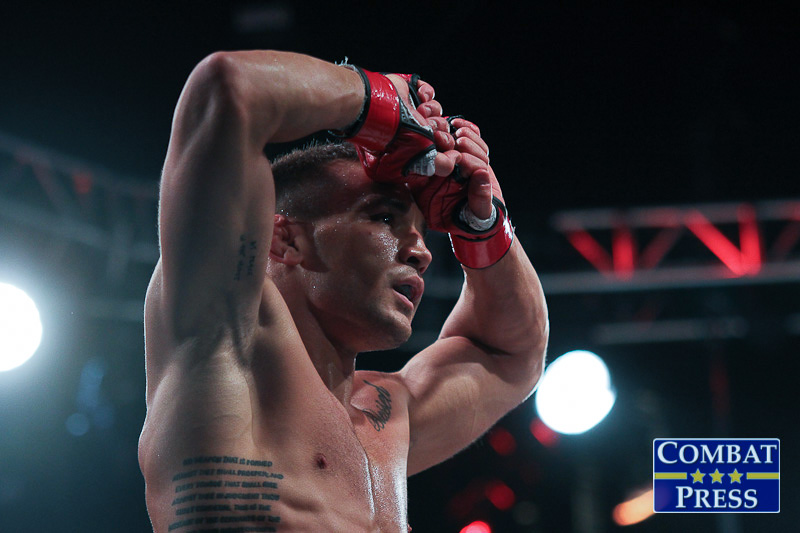 Bellator and the USO have teamed up for a “Salute the Troops” event, which also happens to count as Bellator 212. It’s no flimsy effort, either. The troops get treated to a headliner rematch between Bellator lightweight champion Brent Primus and challenger Michael Chandler, plus a heavyweight clash featuring UFC veteran Frank Mir and a featherweight showcase for rising star A.J. McKee Jr. The event takes place on Dec. 14 at the Neal S. Blaisdell Center in Honolulu and kicks off a two-event weekend for the promotion.

Primus was last seen in June 2017, when he captured the lightweight belt with a win over Chandler. Unfortunately, the end came as the result of an injury to Chandler. Primus, who remains undefeated, would like nothing more than to validate his championship reign with a clean and clear victory over Chandler. However, the former champ is hungry. He regained his form with wins this year over Goiti Yamauchi and Brandon Girtz. Now, he wants his belt back.

Mir has been dropped by punches in two consecutive bouts, including his Bellator debut against Fedor Emelianenko. The 39-year-old has seen better days, and it won’t get any easier when he fights Javy Ayala, the man who spoiled Sergei Kharitonov’s arrival in Bellator.

The 23-year-old McKee has handled everything Bellator has thrown his way thus far. Now, he meets Daniel Crawford, a 10-2 prospect who lost a close decision in his Bellator debut.

The main card also features a featherweight affair between Derek Campos and Sam Sicilia, as well as a clash between flyweight ladies Alejandra Lara and Juliana Velasquez. The preliminary card airs live on Bellator.com at 8 p.m. ET. The main card can be seen on the Paramount Network or DAZN at 10 p.m. ET.

Brent Primus snagged Bellator’s lightweight championship in 2017 when Michael Chandler suffered an ankle injury in their bout and was unable to continue. Now, Chandler wants the belt back. Can Primus defeat a healthy Chandler?

Possibly. He definitely looked competitive in the short time the two men were in the cage together at Bellator’s NYC show. Primus made his kicks count, and it obviously took its toll on Chandler.

However, it’s tough to take less than two and a half minutes of action and distill it into a five-round outcome. Had Chandler not injured his ankle, there’s a solid chance that this would have turned into a typical case of Chandler going back-and-forth with a worthy opponent. Given Primus’s previous fights — split decisions with Derek Anderson and Gleristone Santos — it’s also safe to say that this would not have been a guaranteed runaway victory.

Chandler has had some epic battles. He surprised Eddie Alvarez with a submission finish in the pair’s first outing and only dropped a split verdict in their rematch. He dropped a pair of tough fights to Will Brooks, and he had success against Patricky “Pitbull” Freire. This guy is always in the mix. Primus will have his hands full.

The nature of his first victory over Chandler leaves plenty of doubt as to whether Primus can pull off the victory. Chandler is likely to come out as determined as ever, and Primus might be a bit rusty. It’ll be another back-and-forth affair, but Chandler should emerge with the victory.

Heavyweights Frank Mir and Javy Ayala take the co-headlining slot on this card, but that serves to overshadow one of Bellator’s best homegrown talents further down the lineup. Of course, we’re talking about A.J. McKee Jr. The featherweight up-and-comer meets Daniel Crawford in a main-card bout. Will McKee continue his rise?

Mir has the star power to command a co-headlining slot, but he’s an aging heavyweight who has only won two fights since the start of 2012. He’s up against a guy in Ayala who doesn’t always win, but does pack enough power to make an impression — just ask Sergei Kharitonov about that. Ayala could bring an ugly end to this one, but it won’t mean much in a heavyweight division that’s full of big names, even if some of those guys aren’t very titleworthy themselves.

McKee, meanwhile, is a good part of the future for what is already one of Bellator’s better divisions. The featherweight has conquered 12 opponents so far, including Dominic Mazzotta, Justin Lawrence and John “Macapá” Teixeira. He’s slowly working his way up in terms of difficulty level, and Crawford slots in as another mid-tier test for McKee before he jumps into the fray at the top of Bellator’s 145-pound division.

The 25-year-old Crawford has 10 wins under his belt, but he also suffered a TKO loss to the unheralded Xavier Sedras and dropped a split verdict to Pedro Carvalho. The Brit’s most significant wins came under the BAMMA banner, where he stopped both Ronnie Mann and Damien Lapilus.

Crawford is a solid prospect, but he’s not on McKee’s level. The 23-year-old McKee is a star in the making, and his wrestling alone should overwhelm Crawford. Throw in McKee’s striking — he finished Macapá with a punch in just 69 seconds — and there are a lot of ways in which this fight could end in McKee’s favor.

While the remaining main-card affairs are interesting, let’s take a deep dive to the prelims. Overall, this set of fights is a mixed bag — Bellator even booked a match-up between two men with losing records — but it does feature a famous name: Gracie.

Robson Gracie Jr., the younger brother of Renzo Gracie, makes his debut on the prelims against fellow rookie Brysen Bolohao. As can be expected for a member of the Gracie clan, Robson has a black belt in Brazilian Jiu-Jitsu. The 27-year-old has been looking to debut for a few years now, and this is his chance. However, he doesn’t get a pushover for an opponent.

Bolohao may be new to the pro ranks, but he has spent years at the amateur level, where he has compiled a 9-2-1 mark. The Hawaiian fighter has a couple of submissions and a couple of knockouts to his name, but he often goes the distance in his fights. His two losses came very early in his ammy run, and both fights made it to the scorecards.

This is a big test for Gracie. His name and training partners command him plenty of respect, but he doesn’t have the proven track record of some of his relatives. Furthermore, he’s fighting a seasoned opponent, even if all of that seasoning came at the amateur level. Bellator and its fans will get to see what Robson is made of when these two men clash.