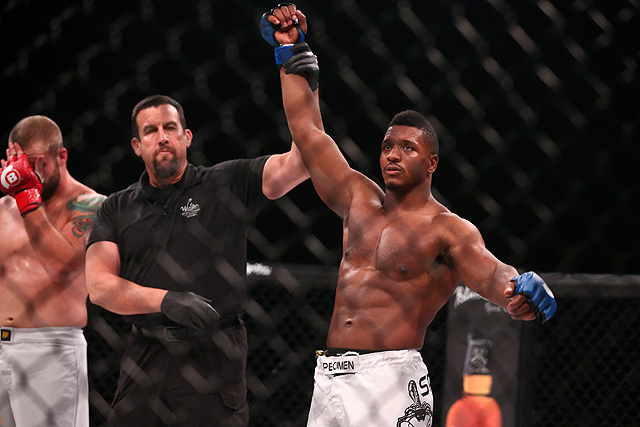 After a successful first season, Dana White’s Tuesday Night Contender Series is back with its second season. The show, which airs live on UFC Fight Pass, aims to give top prospects a chance to impress the UFC brass in an attempt to earn a contract with the company.

The second season kicks off on June 12. The UFC Fight Pass stream gets underway at 8 p.m. ET.

Last season on the Contender Series, Menifield was an intriguing prospect to watch. Unfortunately, his opponent, Daniel Jolly, quit on the stool before Menifield could snag the finish. This could have been the difference between a contract and a bus ticket back to the regionals for one more year. Now, Menifield returns in a headlining slot in search of the contract he believes should have been awarded to him last season.

Since making Jolly quit on the stool, Menifield has gone 2-0 with Legacy Fighting Alliance while finishing both of his opponents. He’s 6-0 overall, and he has been very impressive in all of his fights. His striking should be feared by anybody who stands across from him in the cage. With one Contender Series win under his belt, Menifield seems likely to be signed if he scores another win here.

Not only is Menifield the best prospect on this card, but he’s also involved in what should be the best fight of the evening. Menifield’s style will contrast well with that of Boatwright, who will have no problem engaging on the feet, even to his detriment. Both of these guys are big-time athletes, and they’re explosive as it gets. If this fight doesn’t steal the show, it would be beyond surprising.

On most episodes of the Contender Series, there is at least one fighter who sticks out as, maybe, out of place. On this episode, it’s Team Sityodtong’s Sean Lalley.

Many of the fighters on this episode are legit prospects with strong resumes. Lalley’s record, on the other hand, appears to be padded heavily with low-level regional talent. Lalley, who stands at 8-2 overall, has a very impressive finishing rate. He rarely goes the distance. However, his best, most experienced opponents thus far in his career were current sub-.500 fighters Avery McPhattar, whom Lalley beat twice, and Mitch Whitesel. The only name of note on his resume is Will Santiago, a fighter who beat Lalley and who just so happens to be competing on this card.

Could Lalley just be a diamond waiting in the rough? Sure. It’s happened before with other seemingly subpar fighters. However, with the stacked nature of the welterweight division and how many better 170-pounders were available to fill this slot, his inclusion surely seems questionable, even if he has entertainment value in the cage.

With former Legacy Fighting Championship head and LFA matchmaker Mick Maynard now serving as one of the UFC’s matchmakers, you can always expect a southern fighter with roots to Maynard’s past organizations to make an appearance on the Contender Series. This time around, Holland received the call and will fly under the radar, due to the large shadow that Greg Hardy casts on this card.

Holland, whose pro mark sits at 12-3, is a striker who has really come into his own. He’s a very exciting middleweight with a knack for finishing fights. He also competes in Muay Thai on the side, and owns a Muay Thai win over Bubba McDaniel. Holland has stepped into the cage with UFC contender Curtis Millender and blasted through Geoff Neal, a contract winner from the first Contender Series.

Holland meets with Will Santiago, which should make for a fun fight. Even if all eyes are on the aforementioned Hardy, expect Holland to make some big noise in the cage.

All Hardy has to do here is win. If he does, then the former Dallas Cowboy will join the UFC roster. Hardy has a huge name the UFC can market to casual fight fans. The UFC is not stupid, so it won’t pass on this opportunity.

Hardy would enter a heavyweight division that is not exactly stacked. On a negative note, the media will be aghast — due to his past domestic-abuse charges — if he wins and scores the contract. However, the media’s outrage will not influence the UFC. After all, there is money to be made with a popular former NFLer like Hardy.

Menifield will pick up the win, his second of the Contender Series. That will force UFC President Dana White’s hand.

Both Hardy and his opponent, Austen Lane, are former NFL players. The UFC won’t be able to resist having either man on the roster.