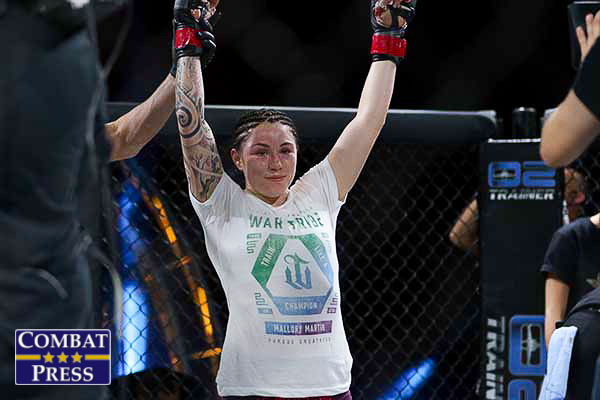 Puzzles can be very difficult. Some people can do them very well, whereas others look at them with complete confusion and never attempt to start. Of course, there is some methodology that can help start the process. Find the corner pieces, for example. Or get the outside borders finished first. Puzzles require a critical thinking process unlike anything else.

Outside of hanging out with family and friends, strawweight fighter Mallory Martin primarily likes to do two things in life when she’s not fighting. One of them does not really relate to her MMA career, and one of them actually helps her training in a less common, but very relatable manner.

“I like to do a lot of longboarding, and I like — I don’t know if this makes me weird or people think I’m weird — but I like to do puzzles,” Martin told Combat Press. “Puzzles are really fun for me, so I’ll do a lot of puzzling or whatever it’s called.”

To the layperson, a puzzle may be nothing more than a 40-piece picture of a cartoon character or a scene from a movie. This is not the case for Martin. While the biggest puzzles in the world might reach as large as 40,000 pieces, she keeps them more manageable, but extremely difficult nonetheless.

“I like to do puzzles that are at least 1000-piece puzzles,” said Martin. “Other than that, I don’t really like a specific puzzle. I just like the hard ones. It doesn’t matter.”

Following a 6-1 amateur career, Martin is now 2-2 as a professional mixed martial artist. She has won some and lost some, but she certainly is able to draw for her experiences with puzzles to parallel with her fighting career.

Martin has a lot of experience training throughout her hometown of Denver, as well as across the Pacific Ocean in Thailand. Her primary gym is Zingano Brazilian Jiu-Jitsu in Broomfield, Colo., but she also cross-trains with UFC vets J.J. Aldrich and current strawweight champ Rose Namajunas at 303 Training Center, and with Brittany Boone at Factory X Muay Thai. Martin also spends time at Tao of Boxing. In Thailand, she has worked out at the famed Tiger Muay Thai camp.

“It’s a lifestyle out there,” said the 24-year-old up-and-comer. “It’s pretty awesome to wake up, eat, train, sleep, train, beach, you know. It’s pretty awesome. You don’t have to worry about much. You just train and have fun. You grow so much as a fighter. Just their culture out there is beautiful, and I feel like I’ve grown so much from being out there as well. And the training is world-class, with trainers and training partners from all over the world. You get a different style and a different look every time you spar or do wrestling or jiu-jitsu.”

Martin loved her time in Thailand. She was already booked to return earlier this year, but she had to put the trip on hold when she was requested to assist with Namajunas’ training camp for her recent title defense against former strawweight champ Joanna Jędrzejczyk.

Zingano BJJ, Factory X, 303 Training Center, Tao of Boxing and Tiger Muay Thai are all pieces of Martin’s very intricate training puzzle. The puzzle is never complete, though. Martial arts is a learning experience with no final destination at which point an athlete knows everything.

“Everyone has the same pieces to their fight puzzle, but you’re always growing as a fighter, and there’s never an ending point, like, ‘Oh, I’ve completed it,’” Martin said. “I feel that if you’re like that, you’ve hit a plateau and you can’t grow. I feel like if you’re open to growing and open to learning new techniques and developing your skills, you will just keep growing as a fighter.”

Martin is young in both age and in her fighting career, but she has already learned a lot. She won her pro debut with a decision nod over Hegin Lin at Kunlun Fight MMA 7 in China less than a year and a half ago. She then suffered back-to-back defeats in Invicta FC and the Legacy Fighting Alliance before bouncing back with a second-round knockout of Tiffany Masters at Invicta FC 27 in January.

“I feel like I put on a great performance,” Martin said. “It was exactly what I envisioned — what I wanted to do. I wanted to go out there and put on a good fight [and] get the win, and I felt really good about it.

“I feel like I’m supposed to be right where I’m at now. I have a lot of experiences to learn from and grow from. I’ve needed to take and become a better fighter from them, and I feel like I have. I feel like I’m on the right track.”

In Martin’s ongoing quest for growth, it was not the win over Masters that taught her the most in the last year. Instead, it was her previous loss to Maycee Barber at LFA 22 in September that provided the most takeaways.

Barber, in a display of incredible unprofessionalism, showed up seven and a half pounds over the limit. After essentially trying to smother Martin for three rounds, Barber proceeded to talk trash in the post-fight speech about the fact that she did not make weight. While this bothered pretty much everybody watching, Martin was not fazed.

“That fight was a learning experience,” Martin admitted. “I probably shouldn’t have taken the fight, but I did. That’s what fighters do — we fight. I felt like I learned from that. I had to overcome a lot of adversity in that fight. I’ve never been put in a lot of triangles in a fight. I’ve never been put in a bad spot, really, in a fight. For me to be in those positions with a girl who should probably be fighting at 125 [pounds] and get out of all of them, just says a lot about how I’ve grown as a fighter and how composed I can be in the cage. [It says a lot about] how I can work through things, get things done and not overreact. I was able to stay calm and work through it.”

As puzzling as it was to listen to Barber try to defend missing weight, the fight itself provided one more piece to Martin’s fight-game puzzle.

About six weeks ago, the LFA came calling again. On Friday night, at The Armory in Minneapolis, Martin will be back in action. She faces Linsey Williams on the main card at LFA 38.

Williams is another 2-2 pro, and she also had a successful amateur career. She currently trains at the Minnesota Martial Arts Academy. Williams will be fighting in her hometown.

“I’ve watched a little bit about her,” Martin said. “I think she’s more of a grappler, I guess. I don’t think she likes to stand and trade. I would say she’s a grappler.”

On paper, Martin’s assumption would seem to be true. Williams has garnered most of her wins by way of submission.

Martin is a well-rounded fighter, so she will take the fight wherever it goes. Williams will be another slightly larger opponent, but, unlike Barber, Williams has yet to miss weight for a pro fight. Martin is ready for a battle, and she knows people will not want to miss her work.

Martin has a long career ahead of her. She is still relatively young, but she has world-class training under her belt. Her fight will air live on AXS TV, so fans everywhere will be able to tune in and watch her add another piece to her personal fighting puzzle.

Martin would like to thank her team at Zingano BJJ, Factory X, 303 Training Center, Tao of Boxing and Tiger Muay Thai. She would also like to thank her family, friends, manager Ruby Sports and Entertainment, and her sponsors: Ballwash, Soba Fighting Addiction and Direct Vapor. Follow Mallory on Twitter: @Malloryymartin and Instagram: @Malloryy_martin
Advertisement