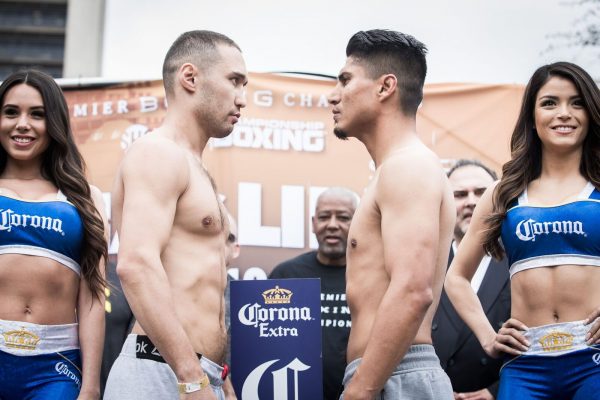 Mikey Garcia and Sergey Lipinets battled for 12 rounds on Saturday Night. It was a war, and definitely one of the best fights we’ve seen in what has already been a stellar 2018 in the boxing world. Garcia won the fight via unanimous decision and made history, becoming the third boxer to win gold at the 126-, 130-, 135- and 140-pound weight classes.

The fight was a back-and-forth slugfest. Garcia absorbed plenty of power punches, but proved he can dish them out just the same. Garcia dropped Lipinets in the seventh round with a counter left hook, the first time the Kazakh boxer has been dropped in his pro career.

Lipinets’ stock increases despite the loss. He is still only 14 fights into his pro career, and he gave Garcia arguably the toughest fight of his career.

Garcia made his intentions known after the fight. He plans on unifying titles at the 135-pound weight class, before moving back up to 140 and, possibly, 147.

The same night boxing gave us a slugest in Garcia and Lipinets, it also delivered another one between Scott Quigg and Oscar Valdez. On a rainy evening at the StubHub venue in California, Valdez, despite fracturing his jaw early in the fight, bested Quigg over 12 rounds. Quigg came into the fight with a size advantage after missing weight and refusing to participate in early-morning weigh-ins. The 27-year-old Valdez has now successfully defended his WBO featherweight title four times. However, with the jaw fracture and the recent battles he’s been in, it’d be wise for a fifth title defense to wait until fall of 2018 at the earliest.

The 140-pound division has a new contender, and his name is Regis Prograis. If critics didn’t think Prograis was a name to take seriously, they surely do now. Prograis delivered a beatdown on former IBF and WBA junior welterweight champion Julius Indongo. Prograis knocked down Indongo three times in the second round to secure the TKO victory. The New Orleans native carries with him a swagger inside the ring, plus the power to put any fighter on the canvas. The win makes Prograis the interim WBC junior welterweight champion.

Krush.86 featured one of the best all-out brawls of the year between Fumiya and Hiroki Nakamura. The absolutely brutal battle was a gritty display of power punching and a roller-coaster ride of emotions.

Enfusion Live #63 featured a number of big names and one major upset. One of the world’s most popular Muay Thai fighters, Buakaw Banchamek, couldn’t take out Enfusion 70-kilogram champion Jonay Risco over the course of their five-round championship fight. Spain’s Risco has now beaten K-1 legends Buakaw, Andy Souwer and Albert Kraus, plus one of the hottest commodities in the division, Tayfun Ozcan. Risco’s victory will be a topic of much debate when the next edition of the Combat Press kickboxing rankings drop in April. Despite his big wins, Risco is just 3-7 overall in his past 10 fights.

Top-10 fighters Luis Tavares and Endy Semeleer continued their winning ways with victories over Fatih Ulusoy and Redouan Laarkoubi, respectively. Tavares is ready for a big-name challenger, whether he defends his heavyweight or his 95-kilogram title next. As for Semeleer, a title fight against the aforementioned Risco makes sense, but a bout against the 72.5-kilogram titleholder Ozcan would draw a massive crowd in the Netherlands.

At Kunlun Fight 70, Yohann Drai and Victor Nagbe booked their tickets to the 2018 Kunlun Fight 70-kilogram tournament final 16. The tournament will feature a few changes this year, including 10 qualifying tournaments instead of 16. The other six spots will be filled by the promotion with five superfight winners and last year’s champion, Marat Grigorian.

Top female kickboxers Wang Kehan and Laëtitia Madjene put it all on the line following a controversial cancellation of their first scheduled bout last year. Kehan cemented her place in the top-10 with a decision victory over the decorated French champion.

The UFC and Bellator MMA took the week off, but the regional and international promotions at the next tier stepped up to fill the gap. It was probably the deepest week ever on the circuit, with cards of note from BAMMA, Deep Jewels, EFC Worldwide, Absolute Championship Berkut, M-1 Global, the Legacy Fighting Alliance, ONE Championship and Road FC.

The 34th edition of BAMMA included three title bouts. Unfortunately, one of those fights — the heavyweight championship clash between Chi Lewis-Parry and Stav Economou — ended in a no-contest. Meanwhile, Terry Brazier just edged out Alex Lohore to claim the BAMMA welterweight title, and Rhys McKee snagged the lightweight strap with a first-round finish of Tim Barnett. The most well-known fighter on the card, though, was UFC veteran Colin Fletcher. Fletcher has struggled to find consistency since departing the UFC, but he did pick up a submission win over Walter Gahadza on Friday.

ONE Championship’s latest offering, Visions of Victory, delivered submission finishes in many of its high-profile bouts. Perhaps most notably, women’s flyweight Michelle Nicolini brought a quick end to the night for her opponent, Iryna Kyselova. The 36-year-old Nicolini is now undefeated through her first three ONE outings.

Is it any surprise the Nick Newell returned to his winning ways at LFA 35? Newell had been away from active competition for more than two and a half years, but he was served up a fight against mediocre veteran Sonny Luque, who has suffered numerous submission losses in the past. Luque lasted just a little more than two minutes against Newell in a 165-pound catchweight contest. It was a great return for Newell, but the LFA should quickly insert him into fights against quality opposition. Newell’s past is evidence enough that he’s capable of much more.

Mina Kurobe beat Satomi Takano again when the two met in the Deep Jewels 19 main event. Reina Miura and Tomo Maesawa also picked up victories at the show. There’s still some talent left in the Deep Jewels promotion, but the organization simply isn’t what it used to be. Kurobe has only really been tested recently when she ventured to Road FC to meet UFC veteran Seo Hee Ham, who handed Kurobe a loss. If Kurobe wants to truly prove herself, it might be time to head to Invicta, which has a much deeper pool of talent.

Speaking of Road FC, the South Korean promotion hosted its 46th show this past weekend. Featherweight prospect Jung Young Lee scored a first-round finish of Se Young Kim in the evening’s headliner, but the most notable names could be found a few fights down the lineup in a lightweight scrap between Shamil Zavurov and UFC veteran Ronys Torres. Zavurov outworked his Brazilian counterpart for three rounds to take the unanimous nod. Both men have solid records through 40-plus fights, but they have each lost key bouts that have kept them outside of the world’s top promotions.

EFC Worldwide crowned a women’s strawweight champ at its 67th event. The new titleholder is 22-year-old Chiara Penco, who is now undefeated through three pro outings after scoring a fourth-round submission finish of Danella Eliasov. At her age and with her looks, Penco is a potential future star for the division. Granted, she needs to show she can beat much better competition than Eliasov first.

EFC’s featherweight kingpin Igeu Kabesa stepped up to lightweight after his original challenger at 145 pounds, Boyd Allen, was scrapped from their scheduled bout. Instead, Kabesa scored a second-round knockout of Paulo Bananada via a spinning elbow. While a victory over Allen would have been a far greater accomplishment, the knockout finish should still cause Kabesa to register on the UFC’s radar.

ACB 82 had one of the deepest cards of the week. UFC veteran Thiago Silva fell short in a split decision against Mikhail Kolobegov in the evening’s headliner, but a few big names did score victories at the event. UFC vet Daniel Sarafian decisioned Carlos Eduardo, Bellator castoff Brett Cooper notched a ground-and-pound stoppage of André Santos, and Maycon Silvan was able to just edged UFC veteran José Maria Tomé. Silvan is probably the most attractive name for the UFC, which has thrown just about all of its top flyweights at champion Demetrious “Mighty Mouse” Johnson to no avail.

M-1 Challenge 89 gave Ivan Buchinger a platform on which he could right the ship after losing his featherweight title in his last outing. Buchinger locked in an anaconda choke to submit Andrey Krasnikov. Once considered among the world’s top prospects, the Slovakian fighter is just 2-2 through his last four fights.