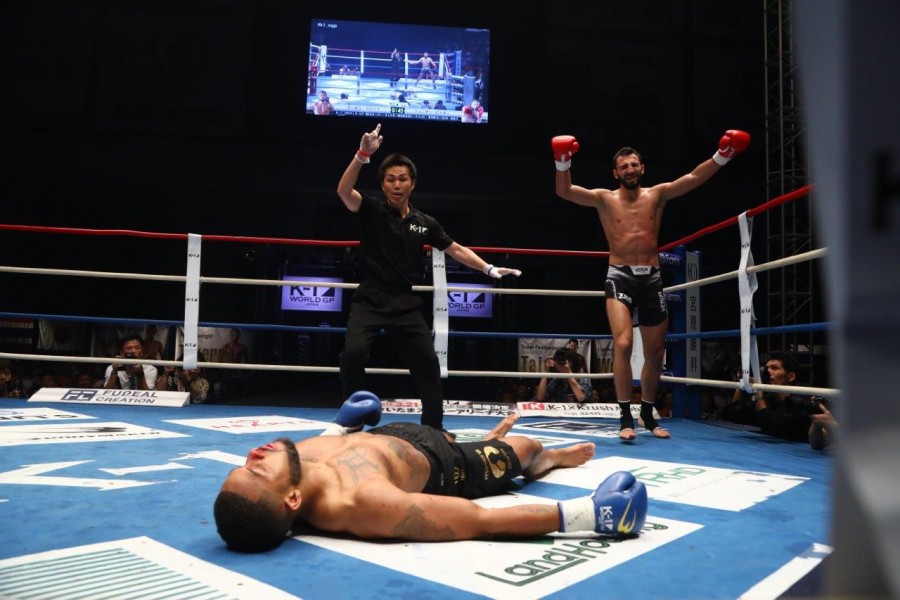 The best event of 2017 featured an incredible eight-man, one-night tournament featuring the deepest division in the sport, a number of champions putting their reputation on the line, and a little bit of controversy too. The K-1 World GP 2017 Super Welterweight Championship Tournament was the event that stuck out the most in a stellar year of kickboxing. Events like GLORY: Redemption, Kunlun Fight 56, and the K-1 World GP Lightweight and Heavyweight tournaments delivered action-packed fights on stacked fight cards. However, the K-1 70-kilogram tournament coupled with championship fights between top-ranked kickboxers made for the nonstop thrills that usually come with big K-1 events.

Top-10 kickboxer Chingiz Allazov entered the tournament as the favorite with 20 straight victories heading into the grand prix. The tournament field featured a number of names including Krush champs Jordan Pikeur and Hiroki Nakajima, former REBELS champion Hinata Watanabe, Sweden’s Sanny Dahlbeck, and K-1 MAX 2008 Japan winner Yasuhiro Kido. A flamboyant character, Kido, kicked off the tournament with solid left middle kick against Luke Whelan. Allazov scored a knockdown with a left knee and knocked out Nakajima with a right knee, left uppercut combination. Dahlbeck added to the finishes with a cut-stoppage win over Yu Hirono and Pikeur battled back and forth with Watanabe to close out the quarterfinals. Kido and Allazov made quick work of their opponents in the semifinals. Kido stopped Dahlbeck with leg kicks in the first round and Allazov destroyed Pikeur with a counter left hook from hell.

Allazov capped off the tournament against Kido in one of the best fights this year. Allazov started strong by dropping Kido in the first round. Kido returned the favor with a knockdown of his own with a counter left cross that stopped Allazov in his tracks. Allazov surged back hard in the third round with two knockdowns, the first with a left straight to return the favor and the second with a right cross to finalize his tournament victory. Allazov scored two knockout wins and four more knockdowns to put on one of the best tournament performances of 2017.

Another fighter who is familiar with tournament winning performances and high-level fights is the Combat Press 2017 Kickboxing Awards ‘Breakout Fighter of the Year’ Wei Rui. The Chinese prospect won the K-1 lightweight title with victories over Daizo Sasaki, Cristian Spetcu, and Ren Hiramoto at the K-1 World GP 2017 Lightweight Championship Tournament. The 26-year-old put his 29-fight winning streak and K-1 belt on the line against Gonnapar Weerasakreck. The fight ending up being one of the best of the year in a closely contested skirmish that showcased two of the highest skilled fighters under 63-kilogram in the world. Rui took the majority decision with one judge scoring the fight a 28-28 draw.

Top-three featherweights Kaew Weerasakreck and Masaaki Noiri battled again, this time for the K-1 super welterweight title, which Kaew won by sweeping the tournament the previous year against the likes of Noiri, Hiroya, and Ilias Bulaid. The fight was a grind with both men landing shots in the clinch, an area of the game where both have lethal weapons that can finish fights. Following three rounds, Kaew was the busier fighter, but the judges scored the fight a draw and the championship bout headed to a fourth round. Despite consensus opinion that the champion defended his title, Noiri’s hand was raised by split decision after the extension round.