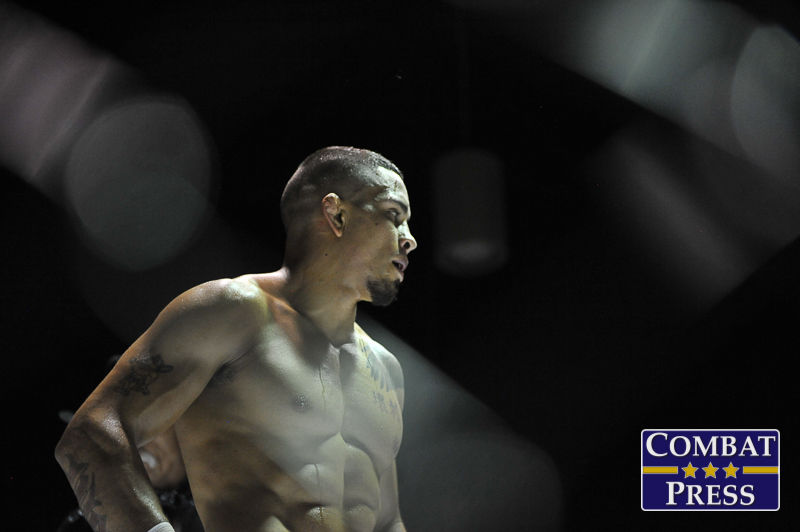 LFA 28’s Luis Luna: The One That Got Away

For some folks, the profession of fighting was a life sentence from a very young age. Whether forced into traditional combat sports, like wrestling or karate, or growing up in a rough town, some people had no other choice in life. For others, fighting is just something in their DNA.

Luis Luna grew up in West Texas, where working for the oil barons was more likely than any other path in life. However, he found that fighting was his calling.

“I don’t really have a specific background in martial arts or anything,” Luna told Combat Press. “I just learned about fighting through life.

“When I started out, the popularity was coming up, and it was happening everywhere. I was always athletic in school, and whenever I left school, it was to go out into the rig and live the oilfield lifestyle for a couple years. I realized I missed the competition, and the feeling of being alive and competing and fighting. I need that for myself. That’s what I was born to do. I don’t care about what people think about me in life and how far I’ve come along. The biggest concern in my life is just having respect of other great fighters.”

Luna has been active as a professional for almost nine years now. He’s still only 32 years old, but he holds a 14-6 record and has fought some really tough opponents, including UFC vets Tony Sims, Ryan Schultz, Cody Pfister and Damon Jackson. The loss to Jackson was especially tough, because after a controversial back-and-forth battle, Luna got caught in a submission in a fight he felt he should have won.

This weekend, at Legacy Fighting Alliance 28, Luna comes in as a replacement to face the aforementioned Jackson in a rematch that has been a long time coming. The Oklahoma native Jackson went on to fight for Bellator, LFA, UFC and Legacy FC, where he beat Leonard Garcia for the featherweight title. The native Texan Luna has been chomping at the bit to get that one back. When the LFA called, he gladly accepted.

“It’s going to be one that I want right there,” Luna said. “I feel like I had that last one won, but I let it slip away, and I watched him beat a couple of my buddies from Albuquerque as well. And the time has come back around, and I’ve been dying to get a chance with these LFA guys ever since they came back through.

“I’ve just been waiting for an opportunity. I didn’t think I was going to get this rematch. I’ve never gotten a redemption chance on one of my losses. You always feel you can beat the ones you lost to, and, of course, you always want a rematch. When I talked to LFA about it, they mentioned Jackson’s name, and the answer would have been yes either way, but it was a ‘hell yeah.’ I took that one right away.”

Tomorrow night at LFA 28, which airs live on AXS TV from The Bomb Factory in Dallas, Luna and Jackson will headline a stacked card. The last time the two fought was April 2013. A lot has changed since then.

“As good as he’s done in the past, when we fought the first time, he was not a name yet,” Luna explained. “Now that he’s built up some hype around him and gone a ways in his career, I’m thrilled to jump up and get in there.

“The difference is a lot of knowledge and a lot of wisdom. There were some little breaks since we last fought, where I took some time — not because I had to, but because I wanted to. Things slowed down for me, because the opportunities just weren’t there. The first time we fought, he came to my hometown, and he was kind of in the spot I’m in now [in] a replacement kind of fight. I don’t underestimate opponents, especially as I get older and more knowledgeable in the game. Now that I have this knowledge on him, I can stick to what needs to be done, instead of thinking I’m just going to kick his ass for coming into my hometown kind of thing. It’s more of a business-type view.”

Dallas may not be where Jackson is from, but it is where he has been training. Luna may be born, bred and living in Texas, but he trains between Bighead MMA in Lubbock and Luttrell/Yee MMA in Albuquerque, N.M., home to one of the fighters he has really looked up to throughout his career.

“I’ve got the most respect for my boy Leonard Garcia,” Luna said. “He’s the one that brought me over here and taught me how to get to the next level. He’s been a good mentor to me, like a big brother, and I’ve always admired the way he put himself in there and left it all in the cage. That’s what I want to be remembered as.”

Luna was never forced into a fighting life. Fighting is simply in his blood. Like any real fighter, he wants to get back the one that got away. On Friday night, he will finally get that chance. The only difference this time is that he’s older, wiser and has nothing to lose. He wants people to tune in to see just that.