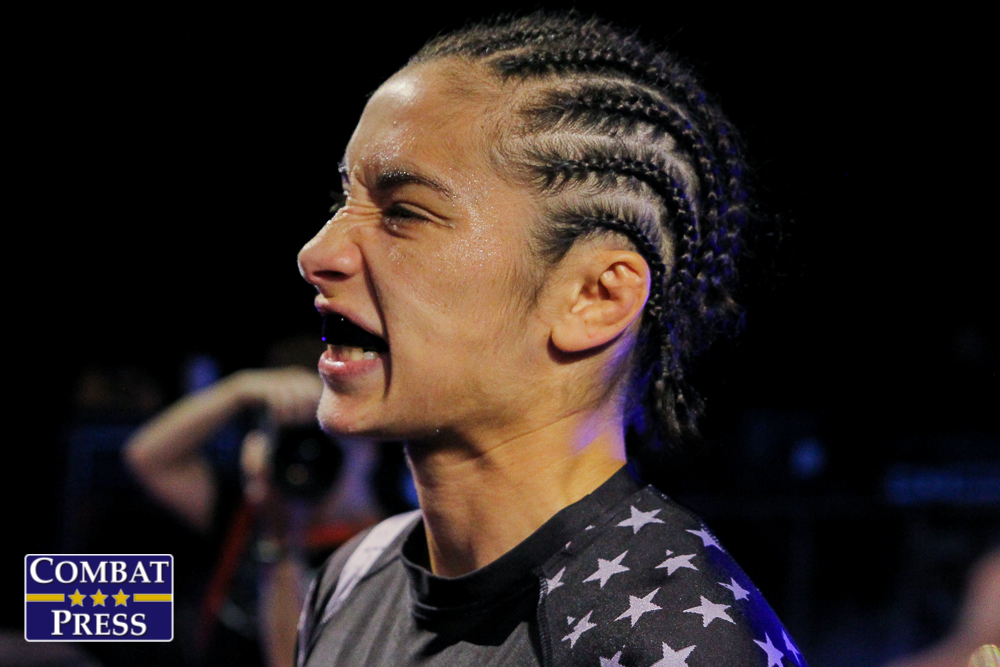 Big shows and bright lights. Ashley Cummins has grown accustomed to these things in her short, but so far successful, MMA career. She’s one of the world’s most talented atomweights and has graced the main card for one of the premier MMA organizations out there during her time with Invicta Fighting Championships. She’s amassed a record of 5-4, with her latest win in March when she topped fellow top-10 fighter Amber Brown under the Invicta banner. Now, Cummins is gearing up for another big show, but this one takes her out of the cage and into the ring.

“I figured why not try Muay Thai, kickboxing, or boxing, so I started looking for pro fights in that area. I was mainly looking for pro Muay Thai fights, [but] I came across this opportunity to have a pro boxing fight for Guns ‘N Hoses,” Cummins told Combat Press. “Right away, I was like hell yeah. It’s always been my dream to fight for Guns ‘N Hoses. So I’m finally able to do that and scratch that off my bucket list.”

There’s excitement in Cummins’ tone when she speaks. Guns ‘N Hoses isn’t just your average promotion. As a police officer, she knows the storied history and importance of an event like this. On Wednesday, Nov. 22, thousands will be in the stands watching from the Scottrade Center in St. Louis.

“Guns ‘N Hoses hold fights all across the U.S. And every year, the day before Thanksgiving, they do boxing and MMA fights, and it’s always police versus firefighters,” explained Cummins. “It’s to raise money for ‘Backstoppers,’ which is an amazing organization that raises money for the families of fallen first-responders. They’ve been doing this for 31 years.

“It’s always been my dream to fight for this event and represent my police department and the thin blue line. And I’ve never been able to, because it’s always been an amateur boxing and MMA event and I turned pro before I became a police officer. This year, they announced for the first time they’ll have pro fights, so immediately I contacted the promoter and said [to] please get me a fight.”

The thin blue line is a term used to represent the fragile ground police officers walk on a daily basis. They risk their lives to protect the community. Sacrifices are made by officers, and unfortunately too many come at the cost of their own lives. As a seven-year police veteran, Cummins has walked this line and recently lost a fellow brother in arms. This fight will be for him, as well as the many others who have fallen.

“For the seven years I’ve been a police officer, I always go into my fights saying I fight to represent all my brothers and sisters in blue and my fallen brothers and sisters in blue,” said Cummins. “Last year, officer Blake Snyder of my police department was shot and killed in the line of duty, and I was able to honor him in my Invicta fight this past March. It was very important for me to be able to do that for Blake and his family and my department. I wanted everyone to know he was a hero. And now, [it’s very important for me] to fight for a promotion where 100 percent of the purpose and the cause of this promotion is to represent all the first-responders, just like Blake, who gave the ultimate sacrifice to keep the public safe.”

Public safety is the focus of Cummins and her fellow officers in the St. Louis Police Department on a daily basis. There have been insurmountable gains made not just in the safety of citizens, but in the relationships between citizens and officers. Turn on the cable news these past few years and you might find that statement surprising, but Cummins is setting the record straight on any negative perceptions the media tries to make.

“I think every year it’s gotten better and we’re all coming together. It’s frustrating, but that’s the world we live in, where the media has their own agenda. And I’m really proud of my city and my department. How much we’ve done together as a whole and to have a positive influence on kids at a young age, so they grow up knowing they can come for help and not be afraid and know we’ll always be there to help.”

Renewed optimism is a reason Guns ‘N Hoses is looking to have its biggest event in 31 years. The community is rallying around the first-responders on the card. The chance to fight for a big show and under bright lights is just an added bonus for a fighter like Cummins.