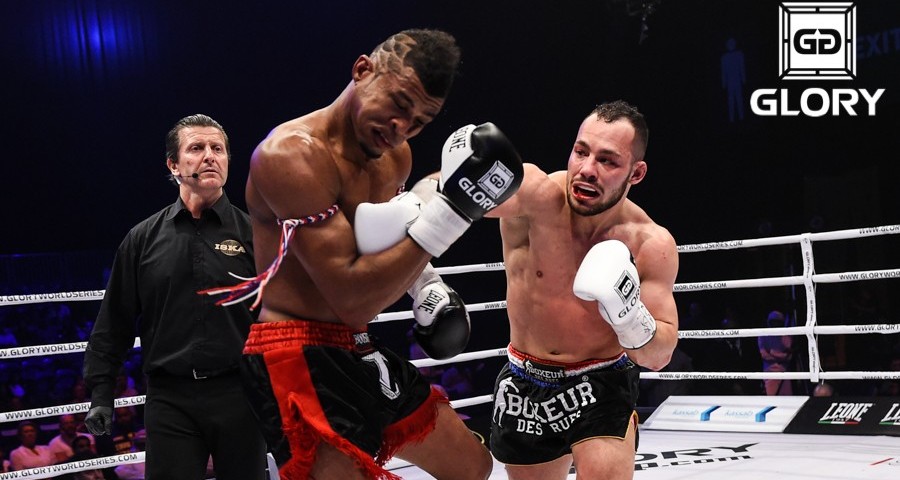 GLORY Kickboxing makes the trip to the Sporthallen Zuid in Amsterdam, The Netherlands, on Saturday, Sept. 30, for GLORY 45: Amsterdam.

The GLORY world featherweight title is on the line when current champ Robin van Roosmalen takes on former titleholder Serhiy Adamchuk. The Dutch champion is the only fighter to hold titles in two different weight classes in GLORY history. The much-anticipated match-up came to fruition when Adamchuk bested former title challenger Dylan Salvador at GLORY 42.

Van Roosmalen has been a dominant force in both the featherweight and lightweight divisions for the past few years. He earned his second featherweight title in his last outing against Petchpanomrung Kiatmuu9 at GLORY 41 after being stripped of the title at GLORY 37 when he missed weight.

The performance wasn’t exactly a dominant one for the Dutch champion. Many pundits gave the Thai challenger the nod. However, the judges were more fond of van Roosmalen’s strikes to the head rather than Petchpanomrung’s kicks to the body and legs. The fight seemed to continue a trend for van Roosmalen, who has really only struggled when facing southpaws from a high-level Muay Thai background, such as current GLORY lightweight titleholder Sitthichai Sitsongpeenong. Sitthichai was able to score with his kicks to the head, body, arms and legs of the Dutch fighter. All three fights had a similar style and seemed to show a chink in the armor of the seemingly untouchable champion.

Adamchuk brings some similar problems to the table. The former GLORY featherweight kingpin was looked at as a potential opponent for van Roosmalen even before he dropped to the featherweight division. The Ukrainian fighter stepped up on extremely short notice against top-10 lightweight Marat Grigorian at GLORY 22 and won. The shocking upset and another victory over Anvar Boynazarov was enough to earn a title shot. Adamchuk conquered Gabriel Varga over five rounds and defended his title in his next fight against Mosab Amrani.

The potential match-up between Adamchuk and van Roosmalen seemed to grow in interest as Adamchuk continued his unbeaten run in the GLORY ring. That run ended with a majority decision loss to Varga at GLORY 32. The Mike’s Gym product couldn’t restart his momentum in the GLORY contender tournament at the very next event, where he lost by split decision to Giga Chikadze in a massive upset. Adamchuk picked up a win over Nafi Bilalovski in Brussels, but lost again by a split verdict to Petchpanomrung, who would fight van Roosmalen for the title next. He finally turned his luck around in his last outing against former top-10 kickboxer Dylan Salvador. After losing to Sitthichai for the lightweight title, Salvador dropped down to featherweight for another chance at gold, but Adamchuk was able to show off his diverse attack from southpaw and orthodox positions.

Adamchuk’s head coach, Mike Passenier, and the team at Mike’s Gym have been working on the kickboxer’s mental approach during his fights. At times, the skilled Ukrainian wasn’t throwing enough offense and was too willing to fight at his opponent’s pace. Adamchuk will need to make these changes if he hopes to make his work count on the judges’ scorecards.

Van Roosmalen is the quintessential Dutch-style practitioner. He rarely takes a backwards step and is always prepared to defend and counter immediately. Even if van Roosmalen gets hit in an exchange, he fires back with power and well-timed low kicks.

Adamchuk offers a style that could draw out a faster, pressure-based style from the current champ. He is able to throw a diverse array of attacks from his traditional southpaw stance, as well as while switching to orthodox.

If Adamchuk doesn’t keep up with van Roosmalen’s output, he could very well find himself behind on the scorecards early. Just like in van Roosmalen’s wins over Sitthichai and Petchpanomrung, this fight will come down to what the judges are seeing. Damage is the top scoring criteria, followed by spectacular scoring strikes and then effective strikes.

Adamchuk will have to pull something special out of his bag of tricks if he hopes to sway the judges against the Dutch champion in Amsterdam. This fight plays out as a high-level, back-and-forth battle that ends in a close decision victory for van Roosmalen.

The light heavyweight division has multiple contenders currently riding lengthy winning streaks. Can the victor of this tournament jump the line and face the winner of the GLORY 47 showdown between Artem Vakhitov and Ariel Machado, or is interim titleholder Pavel Zhuravlev locked in for the next shot? Also, who takes the tournament?

Unfortunately, the winner of this tournament won’t be the No.1 contender. In fact, the winner might not even be the second or third fighter in line. The interim belt is around Zhuravlev’s waist, and fighters like Zinedine Hameur-Lain and Mourad Bouzidi are on his heels. Therein lies the problem with these contender tournaments. Sure, it’s a quick way to get a fighter two wins in one night, but more often than not over the past year and a half, the winner of the tournament does not fight for a title. Machado’s title shot at GLORY 47 is the rare exception.

Michael Duut is the most experienced fighter in this tournament, but he may not be the favorite after his recent back-to-back disappointing losses against the aforementioned Bouzidi and Fred Sikking. Duut seemed to be on the way back into relevancy after putting together a few wins in 2016, including a “Fight of the Year” candidate in a crazy war with former top-10 light heavyweight Danyo Ilunga. Sikking ran through Duut with a barrage of punches in just over a minute. Duut was warned several times for leading with his head and clinching in his fight with Bouzidi. The referee took two point deductions and eventually had to call the fight because Duut continued to clinch and hold. Duut’s fairytale comeback seems to be slipping away.

Dragos Zubco will test Duut’s abilities in the first round of the tournament. Zubco bested Lucian Danilencu earlier this year to become the first fighter from Moldova to win a WKN international title. The super cruiserweight champ defeated his Romanian foe after three rounds of action. Zubco is an aggressive fighter with a knack for wild and reckless offensive attacks. He will sit back and wait for the right opportunity to spring forward, switching between his punches and kicks as he comes forward. Zubco will also grab the clinch to land his strong high knee. However, if Paul Nicholls is the referee for the contest, who knows how he will handle both fighters in the clinch.

On the other side of the bracket, Moroccan Imad Hadar has been hyped as the next Badr Hari. This is largely due to one brutal spinning-wheel-kick knockout. The young prospect has yet to compile the type of resume that would support those claims. However, he has shown some good skill on his way up. Hadar is very tall for the division and likes to use his size and reach advantage. He is a high-output fighter who likes to use kicks to open opportunities to score with his hands and quick knees in the clinch. Hadar likes to be engaged whether he’s inside or out, which has led to him getting hit and outmuscled in the clinch. He had his moments against the far more experienced Freddy Kemayo in his GLORY debut. However, he wasn’t prepared for a fighter quite as experienced as Kemayo and eventually lost for the first time in his career.

Manny Mancha makes his return to the GLORY ring for the first time in over a year. He made a thrilling debut at GLORY 21 with a third-round knockout. After picking up another knockout against GLORY vet Brian Collette in Legacy Kickboxing, Mancha returned with a decision victory over Warren Thompson at GLORY 30. Mancha has an extensive amateur career where he racked up plenty of devastating knockouts. He likes to get the fight started quickly. The American throws at a fast pace and really enjoys when his opponent is willing to match that pace and style of fight. Mancha’s primary weapons are his front kick and left hook. He has his downfalls, too. He is extremely reckless at times, as evidenced by his brutal knockout loss against Andres Van Engelen.

Duut is the major question mark in this tournament. How will he fare after back-to-back letdowns and with an opponent who won’t back down. Zubco could be the dark horse, should he be able to get by Duut. However, Hadar may be the most skilled fighter in the field. If he can avoid eating a big left hand from Mancha, then he should be able to score the victory and move into the finals. If Hadar meets Duut in the finals, the Moroccan could have what it takes to earn the biggest victory of his career. However, if Zubco impresses and advances, Hadar may actually fare worse. No matter how the bracket plays out, the fights should be exciting and enough to create another contender in the division.