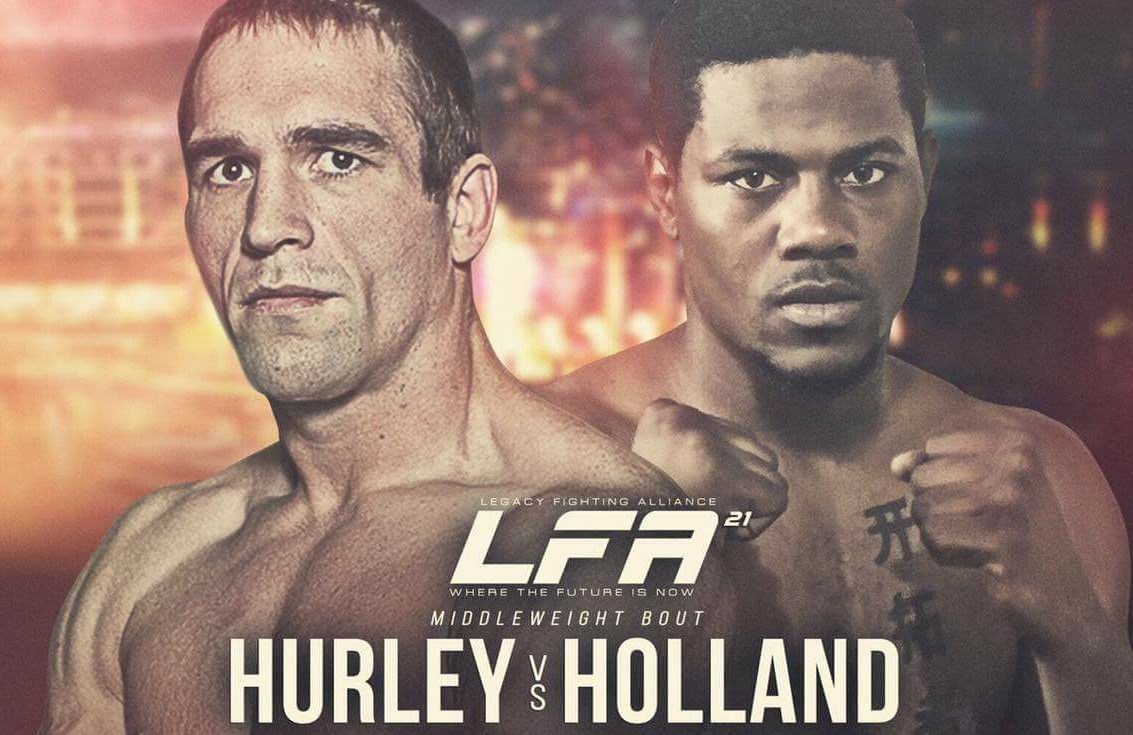 Sometimes it can be hard to distinguish between a fighting life and a life of fighting. While the lines can be blurry, a tragic experience can flip the switch in the blink of an eye. Grady “Sue” Hurley found that out the hard way.

Hurley’s childhood was not one of a lifelong athlete. His nickname “Sue” came from the Johnny Cash song “A Boy Named Sue,” but that was not until he was well into his fighting career. Contrary to the character in the song, Hurley experienced a fine family life. As a kid, though, he was out of shape, into technology, and had a non-existent love life. It was not an ideal teenage existence, but it was his own. However, one day, he decided it was not a life sentence.

“I was about 100 pounds overweight when I turned 18, 19 years old,” Hurley told Combat Press. “To be honest with you, I had never been on a date, never kissed a girl. I was an 18-year-old boy, computer geek, and I wanted to experience those things. My cousin was into Brazilian Jiu-Jitsu, so I tried that, because I couldn’t stand just working out. Within in a year of doing BJJ, I lost 100 pounds, and I had my first MMA fight within six months of training, in the summer of 2000.”

About the time he became old enough to drink, the Mississippi boy turned into a lean, mean fighting machine. What started as a way to look better and meet girls turned into a fighting life.

Within a couple years, Hurley racked up an impressive amateur record and went 6-1 as a pro. Everything was moving in the right direction. Then, he got in a near-fatal car accident.

“I fell asleep at the wheel and went head first into another car at about 80 miles per hour,” Hurley explained. “I crushed my lower jaw, dislocated my left hip, and I got bone and skin grafts in most of my lower jaw to rebuild it. I still have screws in my jaw and my face holding everything together, and they told me that I wouldn’t walk right again, let alone be able to fight.”

In that spring day, Hurley’s switch had flipped. No longer was he living a fighting life. He was in for a fight for which nobody can train. He eventually recovered, though. He married and had two daughters. He purchased a martial-arts gym. He pieced his life back together. It would be well over a decade before he stepped back into a cage.

“I took a 12-year hiatus from fighting,” Hurley said. “Then, my loving wife and I finally got in a position where we bought the gym we were training at. She told me that if I ever wanted to give it a shot, I better do it now, because I wasn’t getting any younger. I was 33 at the time — it was about four years ago — and I asked her if she realized what that meant, because if I start training, that was my priority. I was going to put that first. To be a successful MMA fighter, you need to be selfish to a certain extent.

“She took over and took great care of our daughters and helped around the house. She’s been my rock and allowed me to pursue this dream. We train twice a day, six to seven days a week. We travel to other gyms to train and bring other fighters in. I feel blessed. I know a lot of other fighters don’t have this. They have real jobs, and they have to train on the side. I wasn’t given this. I worked hard for it, and I’ve only been able to train like this for the last year and a half. I had a real job, just like everyone else.”

In June 2014, Hurley stepped back into the cage for the first time since 2002. He walked out of the cage that night in just over six minutes with his first knockout in almost 13 years.

In the three years that followed, Hurley racked up another seven wins, stopping all but two of his opponents. Hurley, a two-promotion champ, is set to step back into action on Friday night for Legacy Fighting Alliance at LFA 21 in Branson, Mo. He will face 24-year-old Kevin Holland in the evening’s co-main event.

“He looks like a really talented striker,” Hurley said. “He throws a lot of fancy spinning stuff with karate style and Muay Thai style. It’s different. It looks like it may not have a ton of pop on it, but you can make up for that with speed. I respect everybody and different styles, but I need to make sure this fight is fought on my terms, my situations and my scenarios, and not his.

“I crosstrain. I’m open-minded, and I’m not thinking that it’s my way or the highway. Our team at Ultimate Fitness and MMA has always been open-minded. If we find a better way to skin the cat, we’ll go that way. We’re a sister school at Memphis Judo and Jiu-jitsu, and they’re a powerhouse school in the region. We crosstrain with those guys as much as possible. I have the mentality that when I walk into the cage, it’s not cocky, but I’m going to impose my will in a matter that favors me. When I do that, evidently, I win 15 out of 16 times.”

Holland has a very impressive record in his short pro career. He has finished all of his wins by knockout or submission. He has only been stopped once, by Rafael Lovato Jr., who is arguably the best submission artist in all of MMA. However, Holland seems to slip up as the fight goes deeper. He lost both of his fights that went the distance. This is a huge advantage for Hurley, who is a grinder.

“He’s 24 and I’m 36,” said the man named Sue. “I’m a young 36, but when he feels what real-man muscle feels like, it’s going to be an eye-opener for him. When young guys feel that for the first time, it’s a very eye-opening experience. After my last few fights, my opponents said, ‘Damn, you’re strong.’ I train all of the time, and I’m all about the grind.”

Hurley is giving up about three inches in height to Holland, but he plans to more than make up for it with his straightforward power game. He plans to take the win on Friday night and keep moving forward with his dream to be in the big show before his time is up. He’s back to his fighting life with no intention of slowing down.

“I think age is a factor that’s probably kept me out of the UFC up until now,” Hurley admitted. “But I’m the V3 champ [and] I’m the Summit FC champ, and I’m going to go in there and beat Kevin Holland and whoever else they put in front of me. Hopefully, I’ll fight for the title and then, what’s next?

Hurley and his wife, April, have created a great life for themselves. They own a gym, they’re raising two beautiful daughters, and they are taking full advantage of this second chance at a fighting life to pursue a dream that has been a long time coming. Just 17 years ago, Hurley didn’t know if he would ever walk the same. Now, he has a chance to showcase his skills at LFA 21 live on AXS TV with the hope of taking the next step toward the UFC Octagon.

“I’m a humble guy,” said Hurley. “I’ve got a great story. I’m 15-1. I’m not a punk. I’m just a good old boy from Mississippi who’s just happy to be alive. Every fight is a blessing to me. I’m going to go out there and put on the best fight I can. I’m not going to go in there running from the guy. If you’ve seen me fight, you’ve seen me go straight for my opponent. If you tune in, you’re going to see the same thing September 1.”

Hurley would like to thank his lord and savior, his wife April, his daughters Vanna and Addison, his family, his sponsors, and his gym and training partners.
Advertisement