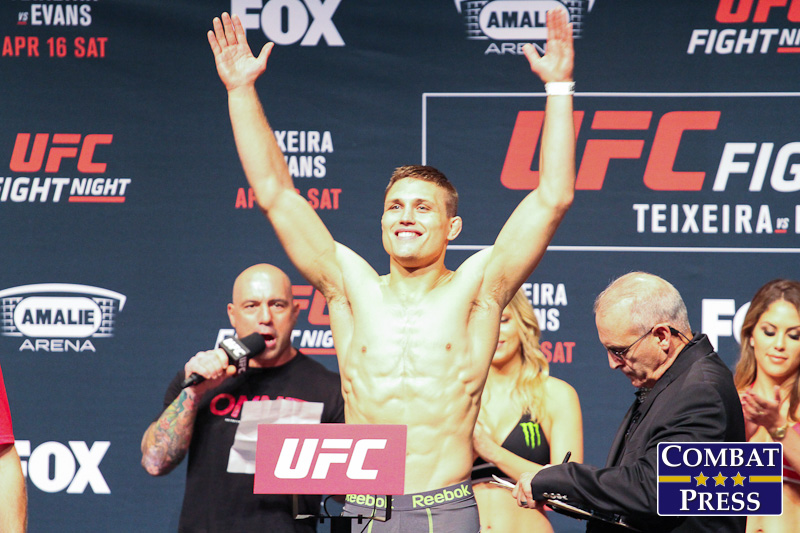 The UFC Athlete Summit that took place two months ago meant different things to different people. While its highlight — or lowlight, really — for many was Cristiane “Cyborg” Justino allegedly decking Angela Magana, UFC lightweight Drew Dober would describe the event as “growth through chaos.”

“It was very interesting and helpful, but probably not how the UFC wanted,” Dober told Combat Press. “There was a lot of networking between fighters, and if you give free food and drinks to fighters, shit will go down. People were mindful of each other and I witnessed a lot of things, and there was lot less animosity than camaraderie. People let loose and had tons of fun, but some had more fun than others.”

The retreat seemed to provide a nice pick-me-up for Dober, who’s looking to rebound after his last fight, a second-round submission loss to Olivier Aubin-Mercier at UFC 206 last year.

“In the first round, I was finding my range and I saw his jab coming,” Dober said. “But I misjudged his range and knew I could knock him down in round two. But I got overly excited and started panicking with the urgency of trying to get a finish and getting back on my feet, so I started making some really bad jiu-jitsu mistakes.”

Dober also dealt with a torn labrum against Aubin-Mercier. It was an injury he sustained the week prior to the fight. Dober didn’t even try moving his shoulder again until the warm-ups before the bout.

“Not to take anything away from Olivier, but I know I can knock out anyone,” Dober said. “Now I try to control the mental side of fighting more, and I’m focusing more on personal reassurance and sports psychology and positive affirmation. I focus on being the best I can be mentally. There are always ups and downs with maintaining your confidence, but all the best fighters have unrelenting confidence.”

Dober is also boosting his mental state by enjoying travel with his wife, whom he met at a post-fight party after a bout in Germany. Dober actually fought his wife’s brother on that card, and Dober said traveling with his German-born wife has exposed him to a wealth of new cultures and traditions.

“In Europe, you can drive 4-5 hours in any direction and it’s a brand new country with a whole new language,” Dober said. “We don’t have that here in the United States, because the country is so big.”

Dober also engaged in travel here at home. He moved to Colorado in 2013 to train with the Elevation Fight Team. The move exposed Dober to a whole new level of camaraderie, which he attributes to his team’s success.

“They focus on the prospects there, and there’s no in-gym competition,” Dober said. “It’s like Team Alpha Male, where everyone wants to see each other succeed.”

Dober, who sports a record of 17-8, actually met his next opponent, Josh Burkman, at the aforementioned UFC Athlete Summit in May. The two will face off at UFC 214 on Saturday, July 29.

“I watched him on The Ultimate Fighter 2, and he actually fought one of my teammates before,” Dober said. “He’s a true martial artist. I’m not big on animosity — I think it makes people nervous. We enjoy each other’s company and I know we’ll have the ‘Fight of the Night’ and it’ll be fireworks. I know what he’s good at and I know what to avoid.”

Although Dober’s UFC career has had many ups and downs, his goal remains the same as many other fighters.

“I want to be ranked and I want that belt,” Dober said. “I want to fight as much as I can and leave an entertaining legacy for the fans. I want a legacy of having stupidly entertaining fights.”

Speaking of entertaining fights, Dober was one of millions who witnessed the “Fight of the Year”-worthy bout between Michael Johnson and Justin Gaethje at The Ultimate Fighter 25 Finale on Friday, July 7. Dober already had some insight into Gaethje’s game, since the two share the same strength-and-conditioning coach.

“I just love how honest he is. The guy’s just a brute,” Dober said. “It was a fantastic fight, but both guys definitely lost some brain cells.”