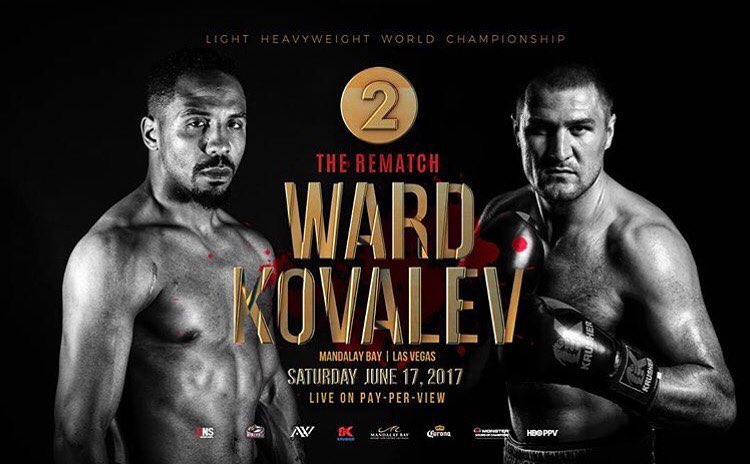 On Saturday, June 17, HBO Boxing will host the much-anticipated rematch between Andre Ward and Sergey Kovalev from the Mandalay Bay Events Center in Las Vegas.  The bout will air via pay-per-view at 9 p.m. ET.

Ward, who defeated Kovalev to become the unified light heavyweight champion, participated in a conference call with the media prior to fight week. Below are quotes from Ward and his trainer, Virgil Hunter.

“It’s a blessing, what the Bay Area fans have always done for me and for what they do for their athletes, whether they’re homegrown or transplants from other cities. They just appreciate the people that go out there and represent them well. And they always return the favor.

“I enjoyed my victory just like I would any other victory. People have to understand that anytime there’s a close decision, you’re going to have opinions either way. I’ve never refuted the fact that it was a close decision but all those out there that say that it’s some home cooking; they’ve got to remember that I’m not, you know, from Las Vegas. You can’t just highlight that side of it. You got to highlight the people that also felt that I deserved the victory and (that it) was a tremendous comeback. It doesn’t take a close decision to get criticism. I’ve shut guys out for 12 rounds and got criticism. So you become immune to it after a certain period of time.

“Like I said before, [Kovalev’s] a good fighter. It’s not what it’s cracked up to be and but I give him his respect. He’s a champion and once you become a champion and have defended your belt, you’re a champion for life.

“I thought I won the fight by at least two rounds. But at the end of the day, there’s close rounds that you can call a swing round. I don’t know how this individual is judging the round or how they feel about it but if you look at the scorecards, I think the judges did a tremendous job because they were on one accord.

“I’m honored to represent my country which I’ve done since I’ve been fortunate enough to do [as] a little boy at the Junior Olympic level all the way up to the Olympics. I’ve had a lot of international competition as a professional and it’s an honor and a privilege to live here in the United States and to represent my country. And I’ve always tried to do that, no matter who I’m fighting.

“I’ve faced a lot of adversity inside the ring. You know, some of it the public has seen. A lot of it, maybe, the public hasn’t seen in the many gyms or the many sparring sessions and everything you’ve got to do to get to a certain level in the sport. I knew what I had in me. I’ve been on the canvas before. I’ve been hurt in fights. I’ve been cut. Things have happened and, you know, my response has always been the same where if I’m physically able, I want to come get that back. I also have a tremendous coach who is my godfather. You saw him shift and go into a different gear to tell me what I needed to hear. He didn’t panic but he had a sense of urgency and he told me what I needed to hear. He just reminded me of all of the greats that had their moment. And he just reminded me that this is [my] moment. And sometimes in fights, especially in moments like this, it’s not so much technical… it’s a feeling.

“On the physical side, it was Virgil [Hunter] having the foresight early on when I was a young boy. He saw that I had a lot of ability and skills. He always told me that I don’t look at the things [I] do well, I look at where you can be beat. He said when I was 11, 12 (or) 13 years old, ‘The only style that can give you trouble right now is a buzz saw.’

“The jab is a lost art today. Skilled inside fighting is really a lost art and a lot of guys don’t want to be there. They want you at range. They want you in a certain place and if they can’t have you there then you see a totally different fighter.

“So outside of my family, I didn’t really have a lot of ex-fighters that I could pick up the phone and call. So I just try to be available, have my phone available, and make the time where I need to make the time (for some of the younger fighters). They’ll let you know what they need to talk about and what they want to talk about. If I have the answer, I’m going to definitely give them everything that I can give them. If I don’t, I’ll try to help them find it because at the end of the day, whether it’s Claressa [Shields] or Shakur [Stevenson], I’m for the fighter. I’m pro fighter. We talk about [training] stuff but it’s also more about life — being stable and making the right decisions now so that down the road, you’re happy that you did what you had to do. It’s an honor and a privilege to be someone that any of those fighters would want to pick up the phone and call. I don’t look at it like a burden. It’s an honor and a privilege.”

“We’ve had a good camp. We’ve had a very smooth camp, the way you would like them to be. Sometimes it can’t always turn out that way but we are fortunate enough this time to have everything clicking. It’s good to see Andre in the gym after four fights and see him getting back and closer and closer to who he truly is — not just as a warrior and a battler and an individual who has a lot of dog in him but also that very skilled pugilist. I’m looking forward to June 17 and let Andre do the talking that night with his left and his right hand.

“[Andre is] a professional and he’s been through this for the 24 years of his life. You have to understand when he went to the Olympics he wasn’t with me at all for three months. So he’s a professional. He knows what to do. He’s my least worry of leaving town for a week. It’s part of the sport. It’s part of the game. And when you have a professional like Andre, you know, you don’t worry about those things.

“Well, the opponent definitely won’t see the same fighter in this fight for a number of reasons. No need to disclose but we always go in with several plans or any plan that needs to be implemented at any given time. Of course, I’m not going to ask him to do anything that I know he can’t do or hasn’t worked on or hasn’t practiced but we’re fortunate enough to be able to adjust and also adapt. I believe that what we worked on for Plan A is going to be more than enough.

“An amateur is when you’re at the top level and you fight at a top level. You go into national tournaments and tend to see some opponents more than once and more than twice. So in a sense, [Andre] has had rematches. As far as this rematch is concern all I can say is ‘oh boy.’ That’s all I can say.

“There wasn’t any fear or trepidation going into the first match. You can’t have that. Of course, you’re aware of what the opponent brings. We’re aware that you have a bigger opponent or a stronger opponent, an opponent that can punch. We’re aware of all that but we’ve been through that before. I mean when he fought in the Olympics at light heavyweight people don’t know or they never acknowledge the fact that he was only 170 pounds. So, he was giving up weight, height and size there. So, he’s used to it. He’s accustomed to it. And because of his physical strength and his stamina and his IQ he’s able to overcome all of these so-called advantages that the other fighter might have. So, once again we respect our opponent and we respect Kovalev on what he has done and what he’s capable of doing. And it’s a healthy respect but it’s not a respect that’s going to stop him from getting smashed June 17.

“My job is to be in that realistic moment. I know [Andre] would embrace and understand what I was saying because it’s been between he and I, things we’ve talked about over the years many, many times. Sometimes you just have to put the strategy out the window and appeal to who you know that fighter is. And I know who he is.”