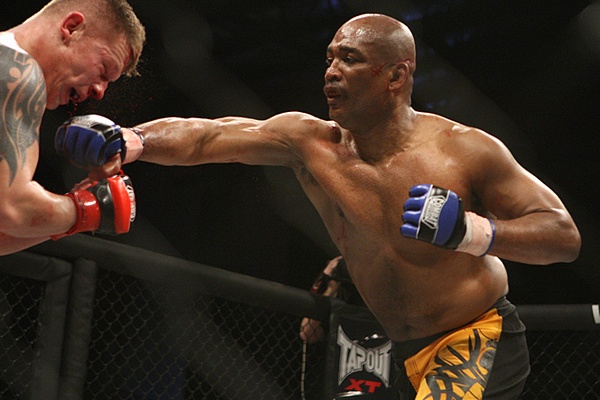 Why Maurice Smith Is Deserving of the UFC Hall of Fame

As the UFC Hall of Fame class for 2017 comes into full shape, the most recent announcement is that of the pending induction of Maurice Smith. His is a name that is sometimes glossed over in the history of the UFC. While Smith may not have the most impressive resume of any Hall of Fame inductee, some people are more about what they changed than what they accomplished.

Smith, a much more accomplished kickboxer, retired from MMA with a .500 record after 28 fights. It is an improvement over how he began his UFC career, with just five wins in 12 fights. He was the last champion of the defunct Extreme Fighting promotion. An argument could be made that he really had no business getting the UFC title shot, but boy did he ever make the most of it. He worked extensively on his takedown defense and guard game with friend and future UFC icon Frank Shamrock. These both benefited him tremendously against his rival, Mark Coleman.

Coleman was at the time thought to be invincible. Until he stepped into the Octagon with Smith, he was a wrecking ball. Six fighters up. Six fighters down. These weren’t chumps, mind you. It didn’t matter if it was Moti Horenstein or Don Frye, they got finished and took the beating of their life in the process. Horenstein was the first, followed by Gary Goodridge, Frye, Julian Sanchez, Brian Johnston and Dan Severn. Coleman was beating guys who did what he did (Frye and Severn) and those who didn’t (Johnston and Goodridge). So, what chance did a 5-7 Smith have against Coleman?

Well, Smith and Shamrock saw something none of the others saw. They saw that Coleman’s quick victories were a liability, not a strength. Coleman was a storm. If he could be weathered, it would be clear skies on the other side. Coleman was a dominant champion who was drowning men in shallow water. What if the water got deep? What if the man who pushed everyone to their limit was pushed to his limit? What would be left of him as the fight wore on?

As it turned out, not much. The water would prove to be too deep. Smith employed a rope-a-dope style, but on the ground. He had a very advanced guard for the fight, which took place at UFC 14, and even more so when you consider his background was kickboxing. This was all thanks to Ken Shamrock’s Lion’s Den team and, most specifically, the aforementioned Frank Shamrock.

Under the tutelage of Frank Shamrock and utilizing a near flawless game plan, Smith made Coleman work in a way he had never had to work in previous fights. He couldn’t do whatever he wanted to do on the ground. Smith controlled Coleman’s legs to limit his ability to improve his position. Smith also controlled Coleman’s arms to limit his striking ability. Smith was so active on bottom that he didn’t just stalemate Coleman. Smith made him work.

The result? Coleman was exhausted when he got back to his feet. Smith was able to pound Coleman’s legs and find some combinations as well. The fight went the distance and the judges awarded the victory to Smith on the strength of his work from the bottom and his dominance on his feet.

Smith’s first and only title defense came against David “Tank” Abbott. The Coleman game plan was even more effective with Abbott. Smith was taken down by Abbott as well, but he stayed calm and made Abbott work. Abbott seemed to be conserving his energy better than Coleman, but he likely started the fight with less stamina than the “Hammer” did.

If Coleman was exhausted when he stood up for the final time with Smith, Abbott was outright dead on his feet. Smith swarmed Tank and began to batter his legs. That was enough. “Big” John McCarthy stepped in and rescued Abbott from a further beating. A withered and defeated Abbott hit the mat after the stoppage and laid on his back, seeking any sort of relief from his exhaustion. This fight would mark the last time Smith’s hand would be raised as UFC heavyweight champion.

Smith dropped his next two heavyweight fights to Randy Couture and Kevin Randleman. However, he had effected a lasting change in the sport.

The kickboxer’s big impact came not in his own discipline, but in the MMA wrestling community. Smith’s victories over Coleman and Abbott showed wrestlers that takedowns and ground-and-pound were no longer going to be enough. If there wasn’t enough knowledge of jiu-jitsu and stand-up to at least navigate around these martial arts and get to the wrestling, these athletes were going to be in trouble.

Furthermore, Smith’s fights proved that competitors had to come to the Octagon with a full gas tank. Smith wrote the blueprint to waiting out storms by utilizing activity off the back and fatiguing big-hitting big men. This blueprint is what led ultimately to Smith’s title loss.

The wrestlers adjusted. Couture was first. He made adjustments. He didn’t look for burst takedowns from the outside. Instead, he worked his way in and found singles. While he did get his feet trapped at times on the ground, he also found success from a north-south position. Couture was in better positions on the ground and conserved energy much better. On the feet, he checked kicks or at least showed an active lead leg that was not there for Smith’s strikes.

While Couture was a different type of wrestler, Randleman showed that if you had Coleman’s basic game plan, you could still be effective with increased stamina. Randleman overwhelmed and battered Smith. He did it all with plenty of energy in reserve, too. The fight went the distance, but Randleman was hopping around the Octagon at its conclusion.

Smith’s impact must be shared with the aforementioned Frank Shamrock, his cornerman and lead trainer for both of his victories. Shamrock was himself fighting the night Smith lost to Couture. While he was in Smith’s corner, you can imagine he wasn’t fully invested in Smith’s fight. That aside, the impact Smith and Shamrock had on the UFC was huge. The Coleman and Abbott fights, coupled with Shamrock’s victory over Tito Ortiz in which Ortiz admitted he just didn’t have enough cardio to hang, put the wrestling world on notice that they need more inside the Octagon. A fighter needed stamina and a more diverse skill set to succeed at the very top.

A straight line from these fights and their lessons could be drawn to the successes of Dan Henderson and Chael Sonnen (both training partners of Couture), Couture himself, Ortiz (a training partner of Abbott and opponent of both Shamrocks), and you could probably make arguments for Chuck Liddell, Matt Hughes and Cain Velasquez as well.

On a side note to Smith’s well-deserved induction, here’s hoping that the UFC and its president, Dana White, use Smith’s induction as an opportunity to bury the hatchet with Frank Shamrock. Shamrock was a key figure in not only Smith’s success, but the early success of the UFC. An argument can be made that he was the promotion’s first true mixed martial artist. It would be nice to see him induct Smith into the Hall of Fame and then, maybe next year, get in himself.