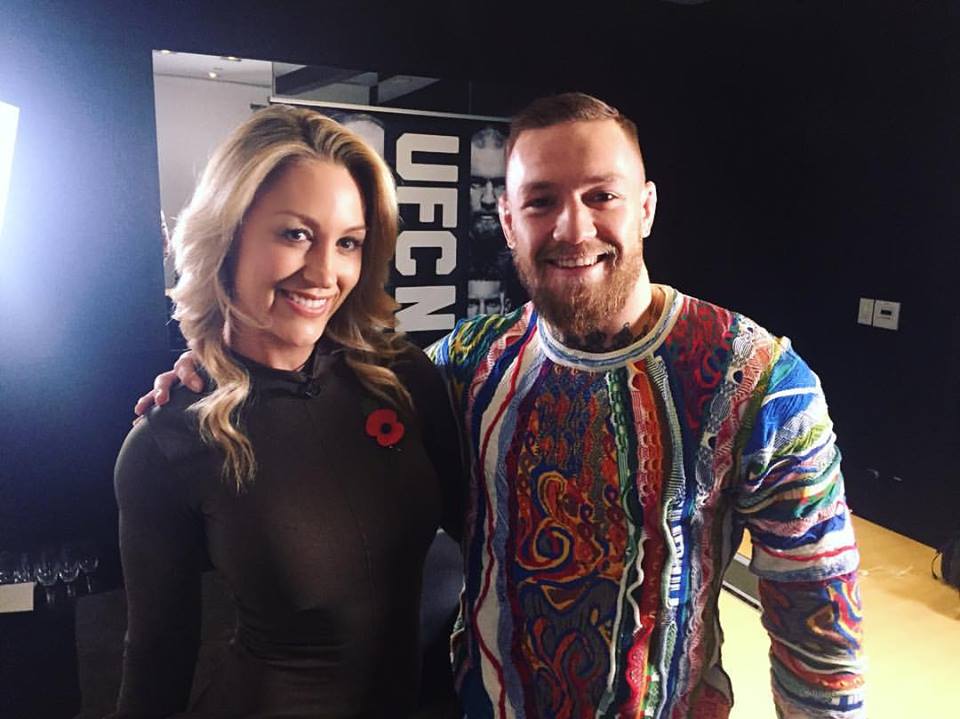 Pearce has emerged as a star across the Atlantic and the Pacific. Americans and Canadians should expect to see and hear more of her soon.

Pearce has moved from a career in international athletics to the side of the Octagon as a host for British-based BT Sport. When she is not interviewing the Conor McGregors of the world, she is sitting beside Gareth A. Davies talking about the happenings of the UFC.

Otherwise, the new addition to California could be on a plane to India, Australia or anywhere else around the world, where she might turn up on TV presenting a sport you may never have heard of, or convincing fitness buffs to Train Like a Gladiator on the Power Plates in their local gym (she’s VERY convincing). If you cannot keep up with her, then she has the Total Body Collection app, available for iOS and Android, with DVDs available on Amazon Video.

The most notable moment in Pearce’s burgeoning career came when she scored a walk-and-talk interview with McGregor after the Irishman’s defeat to Nate Diaz at UFC 196. Millions of folks viewed the BT Sport video in which Pearce used a bit of her athletic pedigree to keep up with McGregor as they walked and talked through the bowels of the MGM Grand Garden Arena, a place with which Pearce has a love-hate relationship (she explains why). Pearce broke down why she thinks her interviews with McGregor are consistently top notch, and what she thinks makes him a generational star, with insight few others have.

She recounted her youth, going from a girl who ran before she walked, to competing internationally for England in athletics by age 15, to becoming a bobsledder and a Gladiator, to eventually settling in as the heptathlete of her business world. Pearce admitted she found more harsh criticism in front of the camera than she ever did as a competitive athlete, and gave thoughts about sexism in sports, the interesting turns at the top of a number of different UFC weight classes, and much more