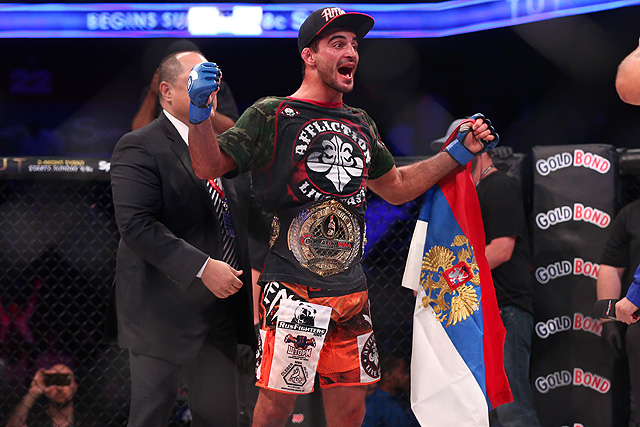 Bellator MMA heads to the Middle East for Bellator 164 at the Menora Mivtachim Arena in Tel Aviv, Israel.

The main event is a rematch for the Bellator welterweight title. Current champion Andrey Koreshkov looks to put away Douglas Lima, the previous champ. Koreshkov has defended the crown once since beating Lima to become the welterweight kingpin. His successful defense came against former UFC lightweight champ Benson Henderson. Koreshkov looked dominant in his victory over Henderson and will seek to post another strong showing in Israel. Following his title loss, Lima won his next fight in London against Paul Daley by unanimous decision.

The co-headliner features Noad Lahat in his fight in Israel since 2009. Lahat, a UFC veteran, will meet Scott Cleve. Lahat’s last appearance ended in a loss in February against Diego Rivas at UFC Fight Night 82. Cleve has gone 2-2 in Bellator. His last outing was a split decision loss against John Teixeira at Bellator 128 in October 2014.

More featherweight action will take place on the main card when former World Series of Fighting featherweight champion and Bellator top contender Georgi Karakhanyan goes up against Kirill Medvedovsky. The main card will also head to the women’s side of the Bellator roster when Lena Ovchynnikova takes on Karla Benitez in a flyweight bout.

Andrey Koreshkov is set to defend his welterweight title against Douglas Lima, a fighter the champ has already defeated once. What is the one thing Lima needs to do differently in this rematch in order to unseat the champion?

Lima was thoroughly dominated in his last fight with Koreshkov. It wasn’t the most entertaining fight by any means. Instead, it was a one-sided victory in favor of the the Russian. If Lima wants to recapture his belt, this fight needs to be all about keeping the distance and preventing Koreshkov from cage grinding or takedowns that would lead to a decision victory for the defending champ.

In their first fight, Lima allowed Koreshkov to dictate the pace and the terms of the contest. The Brazilian allowed Koreshkov to close the distance and hold him against the cage. He also gave up the takedown. It all worked to sap Lima’s energy. Lima had no momentum to build up to a finish or a decision victory. Koreshkov didn’t allow Lima to get going in the fight. This has been the story in a lot of Koreshkov’s fights, actually. His fight with Benson Henderson is a perfect example. Koreshkov used his height and size advantage to take Henderson completely off his game and put away the decision in his favor.

Lima has great leg kicks that keep opponents off balance and takes away a lot of the energy in their legs. This is an extremely useful preventative for the takedown. Lima needs to use these kicks early and often if he wants to get away with the victory. He needs to mix in a stiff jab and some combinations as well to dictate the distance of the fight. If he allows Koreshkov to come in, there needs to be a swift counter to prevent the current champ from continuing forward. The fight has to be contested at a distance if Lima wants to win.

There’s a big difference between saying and doing these things. Koreshkov has shown himself to be one of the better welterweights on the planet. He will do the same thing he did in his first fight with Lima and win another decision victory. The fans won’t be happy with the lack of action, but it’s what the Russian champ needs to do in order to retain his belt.

Outside of the main event, this card is filled with talent that most MMA fans won’t recognize. Which other fighter on this card should fans keep tabs on as a possible contender in the not-so-distant future?

This isn’t really a deep card, but there are a couple obvious names we can throw out there. Lena Ovchynnikova has hovered around in the upper levels of the women’s flyweight division, but her Bellator debut loss to Rebecca Ruth has certainly derailed a lot of her momentum. She was the dark horse in the division, but she can turn it around if she can pile up a couple of wins. The same could be said of Georgi Karakhanyan, who returned to Bellator as a former World Series of Fighting champion and won his return fight against Bubba Jenkins with a quick first-round submission victory. Karakhanyan then dropped consecutive fights against Daniel Weichel and Pat Curran before once again beating Jenkins. Karakhanyan is a great fighter in the featherweight division and can certainly be rise to the top once more. However, let’s go a little deeper on the card and look at Joaquin Buckley.

Buckley’s last fight against UFC veteran Chris Heatherly was an impressive showing for the up-and-comer. Buckley, who only had five professional fights at the time, not only beat Heatherly, but he did so with a straight knockout finish. It will take some time — and Jackie Gosh isn’t the name opponent to put him up there — but he can certainly approach the top of the division. I’ll hold off going all in until he fights another one of the better fighters on the Bellator roster and adds to the Heatherly victory.

Georgi Karakhanyan and Kirill Medvedovsky. Karakhanyan is an exciting fighter to watch. This fight deserves to be the co-main event on the card. Karakhanyan always comes looking to end the fight with a submission and has defeated some good, young fighters in his division, including Bubba Jenkins and Lance Palmer.

This could be a big fight for Karakhanyan. He’s out to rebound from consecutive losses that put him at the back of the line. Meanwhile, Medvedovsky is getting a huge jump in competition here, and it will be interesting to see just how he handles that steep climb.