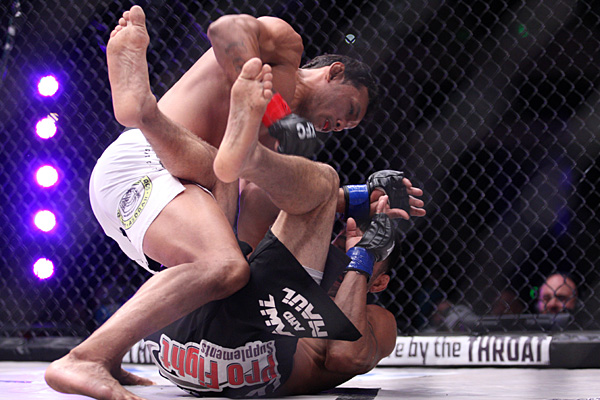 Out of Obscurity: Deep 77 Impact, ONE Championship and Cage Titans FC 30

In its more recent events, the Deep Jewels organization hasn’t quite had the level of depth that fans have become accustomed to from the all women’s promotion. Now, Deep is bringing together its men’s and women’s leagues for a single event. Perhaps this is a sign of things to come? Deep Jewels returns with its 13th effort, featuring such notables as Mika Nagano, Sachiko Fujimori, Mina Kurobe and Kanna Asakura. However, Deep’s 77th Impact venture — the men’s side of the card — is where the best match-up can be found. Deep has paired Ken Hasegawa, a fighter with only one loss in 14 career outings, against veteran combatant Yoshiyuki Nakanishi in a featured middleweight bout.

After a lengthy run in open-weight fights and a reign as Deep’s Megaton champion, the 29-year-old Hasegawa has finally realized that his best future prospects might require a move to a stricter weight classification. Instead of continuing to compete against all sizes of opponent, the Kingdom Ehrgeiz export has recently settled into the middleweight division following a brief stop at light heavyweight. Hasegawa, who once looked like an out-of-shape fighter, has found tougher competition along the way. His 205-pound appearance came on American shores, a first for the Japanese fighter, under the Titan FC banner, where he topped Matt Thompson via unanimous decision. The Deep veteran then returned home, dropped to middleweight and submitted Ryuta Sakurai in the first round of their encounter. He finally suffered his first setback in his most recent fight, a Rizin Fighting Federation New Year’s Eve show clash with Bellator veteran Brennan Ward. Ward submitted the southpaw in the second round to hand him his first pro loss in a career that kicked off in 2011.

Nakanishi enjoyed a long reign of his own as Deep’s light heavyweight champion. The 31-year-old recently shifted his focus to the middleweight division, where he captured Deep’s crown with a decision nod over Kazuhiro Nakamura. His stay at the top was short-lived, however. In his first defense, the Tribe Tokyo MMA product dropped the belt to Young Choi in a closely contested fight that ended in a majority decision. Nakanishi has taken All-Japan Sambo champion honors at 100 kilograms for four consecutive years. The judoka has only suffered four career defeats: a knockout loss to Tatsuya Mizuno, a submission defeat at the hands of the aforementioned Sakurai, a knockout loss to Aleksandar Radosavljevic and the majority decision defeat against Choi.

Hasegawa can brawl. He knows how to finish fights with his fists, too. That makes the 29-year-old a very dangerous adversary when the fight is upright. That’s a problem against a fighter like Nakanishi, whose judo and sambo background make him a well-rounded fighter who can take this contest anywhere. However, Nakanishi isn’t running away with this fight. He has a tendency to fight close fights. Nakanishi barely edged Christian M’Pumbu on the scorecards. Ditto the aforementioned Choi, who came back to avenge the loss in another razor-close contest.

Hasegawa did stumble against Ward, and that could be a sign that fighting at an actual competitive weight is more than Hasegawa can handle. This fight is his chance to prove that theory wrong. He’ll need to put pressure on Nakanishi and test a chin that has crumbled in the past. Nakanishi isn’t any more of a ground-first fighter than Hasegawa, but he appears to be more vulnerable to the knockout finish. This could make all the difference when he locks horns with Hasegawa. It should be a fun fight, right up until Hasegawa ends it with a knockout blow.

Asian-based ONE Championship continues to march on with event after event, but these events are increasingly focused on local talent and only a few marquee names. For its “Titles and Titans” event, the promotion apparently forgot one thing: the titles. There are no belts on the line in Jakarta, but that doesn’t mean this event is devoid of intriguing fights. This show could set the stage for a few new contenders to rise from the crowd. The evening’s headliner features failed welterweight title challenger Luis “Sapo” Santos in a move up to the middleweight division to fight former 185-pound ONE champ Igor Svirid.

Sapo’s ONE tenure has been marred by his attempt to challenge Ben Askren for the league’s welterweight crown. In their first meeting, Askren accidentally poked Sapo in the eye and the fight was declared a no-contest. The second fight didn’t even make it to the cage. Instead, Sapo failed to make weight and the bout was scrapped. It’s just one of a number of disappointing moments in the Brazilian’s 72-fight career. He’s had plenty of chances to turn the corner and excel in a major promotion, but he seems incapable of taking that leap. Sapo, a pro since the year 2000, made his WEC debut in 2008 and lost to Alex Serdyukov. He signed with Bellator in 2011, but only managed a 2-2 mark that featured a win over Dan Hornbuckle and losses to Ben Saunders and Ryan Ford. He did well in the XFC, too, and won all of his fights after joining ONE, but issues on the scales and in his fight with Askren have left the Brazilian with little to brag about.

Svirid has plenty of accomplishments of his own to brag about. “Lionheart” tore through the competition under the Absolute Championship Berkut banner to claim the promotion’s middleweight grand prix title. ONE Championship snatched him up and immediately tossed him into a middleweight title tilt against Leandro Ataides. The Kazakhstan native destroyed Ataides in just 17 seconds to capture the belt. This, however, is where Svirid’s success ran out. The 30-year-old returned to action in late 2015 in an effort to defend his ONE belt, but he suffered a TKO loss to challenger Vitaly Bigdash.

With 72 fights on his resume, Sapo is about as experienced as they come. However, his struggles are troubling. He’s only suffered nine losses, but those defeats have been sprinkled throughout his career and include such head-scratchers as a submission due to strikes against mediocre fighter Simão Melo, three defeats in a four-fight stretch in 2007-08 and back-to-back losses with Bellator. His troubles at the scales should fade now that he’s fighting at 185 pounds, but he still needs to prove that he can turn in consistent results.

Sapo has been a real force ever since he departed Bellator. His stint in the American promotion started with two fights that went the distance in his favor and then two losses. Once he returned to the smaller venues of XFC, Inka FC and XFC International, he hit a stride of stoppage wins that carried him into ONE and a botched title shot. He’s capable of regaining that momentum at 185 pounds, and Svirid’s two knockout losses make him an ideal opponent for Santos to meet.

Neither man has played a very conservative game in their recent outings, so this one is likely to end with a finish. Sapo is out to prove that he isn’t scared, as Askren has suggested, and that means earning another fight with the champ. The American Top Team fighter will come out swinging and put Svirid away.

Cage Titans has put the focus of its 30th event on a rematch of a CES MMA preliminary card flyweight fight that lasted just 27 seconds, but the real gem here is a featherweight collision of prospects Rodrigo Almeida and Manny Bermudez.

Almeida is the more experienced fighter of the pair. The 30-year-old made his pro debut in 2008 and posted an unexceptional 5-2 mark through his first seven fights. Then, everything finally started to click. The Wai Kru fighter won his next seven fights and eight of nine overall. “The Young Lion’s” streak featured a notable decision win over UFC veteran Walel Watson. His only loss came under the World Series of Fighting banner, where he was edged in a split decision by Bruce Boyington. Almeida responded to the loss by shifting up to lightweight and claiming a decision win over Jeff Anderson. He does have more decision wins (6) than he does submissions (5), but Almeida’s grappling chops make him a legitimate threat on the ground.

Bermudez is an undefeated pro, but he also has a lengthy amateur resume. The 22-year-old went 7-1 as an amateur, suffering a submission loss to Grant Mosley in only his second fight. That amateur career launched in 2012, and Bermudez has only been fighting professionally since 2015. As a pro, he has finished five of his six opponents within the first round. He went the distance to defeat formerly undefeated fighter Dan Dubuque. The South Shore Sportfighting export also holds a first-round submission win over Jeff Anderson, the same Anderson that went three rounds with Almeida.

Almeida may be a submission threat, but Bermudez, who also finished all seven of his amateur wins by way of submission, is a certified finisher. Bermudez makes quick work of opponents, too. His five first-round finishes as a pro are joined by four first-round finishes as an ammy. Almeida’s best chance might be to catch Bermudez at his own game and submit the youngster.

Experience does go a long way in the fight game, so Almeida cannot be counted out. He’s seen tougher competition and has even defeated a UFC veteran. This is a test for Bermudez to see if he can move up a rung on the developmental ladder. Almeida might grind out a decision win, but that means hanging with Bermudez for three rounds. That’s a lot to ask for from the veteran against someone who is likely to be very aggressive in hunting for submissions. Bermudez is going to find an opportunity to lock in a choke somewhere along the way, and that will be the only opportunity he needs to keep his spotless record intact.