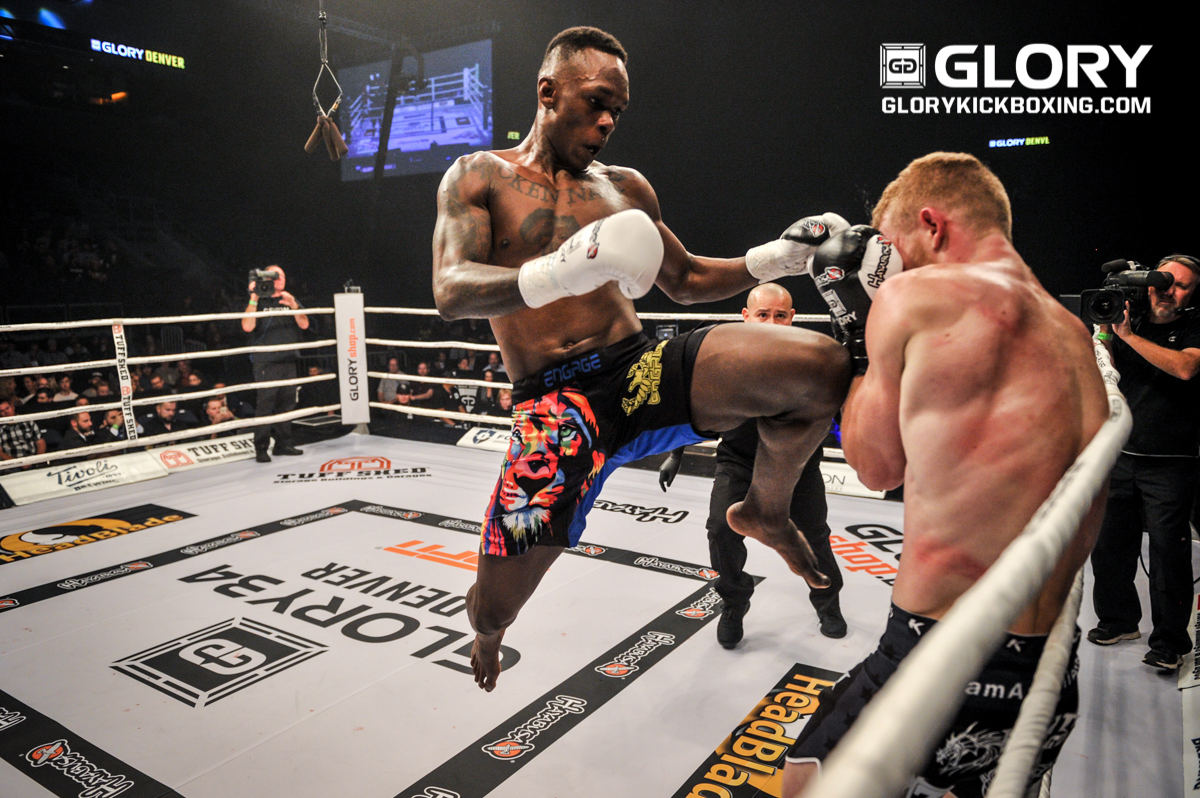 Also on the night’s main card, a one-night, four-man welterweight contender tournament features Alan Scheinson and Karim Benmansour in one half of the ladder, while Yoann Kongolo and Konstantin Khuzin compete on the other side of the bracket.

GLORY middleweight champion Jason Wilnis stopped Simon Marcus to capture the title at GLORY 33. Can he repeat the performance against the Nigerian-born New Zealander Israel Adesanya? Or will Adesanya complete his ascension through the rankings and capture gold?

Not many middleweights had a better year than the Dutchman Wilnis. After opening the year with a win under the Kunlun Fight banner, the 26-year-old reeled off three straight inside the GLORY ring. After besting Filip Verlinden in Paris, Wilnis got revenge against American Joe Schilling in a rematch of the pair’s GLORY 24 headliner that ended when Wilnis sustained an injury. Those wins set the stage for biggest victory to date for Wilnis when he stopped Marcus at GLORY 33 to take home the title.

The one middleweight who arguably had a better 2016 than Wilnis was Israel Adesanya. “The Style Bender” opened the year with a controversial loss to top-10 fighter Alex Pereira, but he did not taste defeat again for the remainder of the year. Largely competing in China, Adesanya captured wins over the aforementioned Verlinden and Yousri Belgaroui and landed a devastating liver kick finish of Bogdan Stoica. That set up his GLORY return at GLORY 34 in Denver, where he dominated Canada’s Robert Thomas before again defeating Belgaroui to set up the title scrap with Marcus.

This fight will be a major style clash. Wilnis possesses strong boxing and low kicks, while Adesanya is one of the most unpredictable and flashy strikers in the sport. If nothing else, Wilnis is consistent in his fighting style. He typically starts slow, but turns up the pace in the later rounds. His finish of Marcus was actually atypical, but he deserves credit for capitalizing on Marcus fighting emotionally due to a controversial knockdown ruling in the round prior.

Adesanya is as slick as they come on the feet. He has physical gifts in his length and athleticism, which leads to movement unlike any other fighter in the middleweight ranks. He employs a diverse arsenal that keeps his opponents guessing as to what he’s going to throw next. He has skyrocketed through the division in the last few years, and deservedly so. The lone question mark following his tournament win in Denver is whether he can maintain his pace for a full five rounds. He was visibly gassed in the tournament final at altitude, which could give Wilnis the chance to take advantage of the Kiwi.

If the champion can start fast and avoid getting rattled by Adesanya’s movement and variable offensive output, then he has a solid chance to outwork the challenger in the later rounds. However, even Wilnis has shown to have his own late-fight struggles in the GLORY 20 contender tournament. Adesanya has showcased the tools to be one of the sport’s best fighters. He’ll validate it by defeating Wilnis on the scorecards and taking home the GLORY title.

Featherweight champion Robin van Roosmalen has already proven that he’s among the sport’s pound-for-pound elite by holding GLORY belts in two divisions. Will the Dutchman be able to hold off red-hot Canadian Matt Embree? If so, will van Roosmalen take another crack at the lightweight division in the near future?

This fight has all the right pieces to add up to fireworks. Holland’s van Roosmalen has been among the sport’s best for the better part of the last five years, and he’s proved it by holding both the GLORY lightweight belt and now the promotion’s featherweight strap. Meanwhile, Toronto’s Embree took the division by storm at GLORY 33, where he knocked out both Chi Bin Lim and Giga Chikadze to lock in his title shot.

Van Roosmalen’s 2016 was tumultuous. He started the year by winning his MMA debut before losing his 70-kilogram title to pound-for-pound king Sittichai at GLORY 31 in his native Amsterdam. “Poker Face” opted to drop down to featherweight after the loss and clashed with champion Gabriel Varga at GLORY 34 in Denver. Van Roosmalen put on one of the most dominant performances of his career against the Canadian, scoring multiple knockdowns with a steady stream of power punches and low kicks. Varga’s corner ended up throwing in the towel at the end of the fourth round, making the Dutchman the first to hold GLORY titles in multiple weight classes.

Embree’s transition from the world of Muay Thai to GLORY rules was about as seamless as it comes. While some fighters have struggled with the limited clinching and inability to throw elbows in the GLORY ring, the Canadian seemed unfazed in the GLORY 33 contender tournament. He battered South Korea’s Lim, earning a pair of knockdowns in the semifinals, before sending Chikadze into a concussed slumber with a nasty overhand right.

Van Roosmalen is a strong combination of power and grit. He rarely gets tired. He’s only been knocked out once in the last five years, and his losses read like a who’s who of kickboxing’s pound-for-pound rankings. Embree proved he has the tools and power to change any fight in his GLORY debut, but repeating that performance against van Roosmalen will prove to be difficult. Over the course of five rounds, van Roosmalen’s boxing will take its toll on Embree and the Dutchman will retain his belt when the scores are read.

The question then becomes, will GLORY grant him a rubber match with Sittichai? Certainly a champion-vs.-champion match-up has to be appealing to the promotion. Or perhaps van Roosmalen is given a chance to avenge his loss to Giorgio Petrosyan from the GLORY 3 tournament final. With the depth of the 70-kilogram division, it makes sense for van Roosmalen to push for tough fights, no matter how much success he finds in the featherweight ranks. And I won’t be the least bit surprised if the promotion grants him his wish to challenge for lightweight gold yet again in 2017.

The welterweight contender tournament features one former title challenger in Yoann Kongolo, plus GLORY veteran Karim Benmansour and promotional newcomers Alan Scheinson and Konstantin Khuzin. Which fighter walks away with the tournament crown and a title shot against new champion Cédric Doumbé?

There’s a clear favorite in this tournament: Switzerland’s Kongolo. However, that doesn’t mean the match-ups are lacking intrigue. France’s Benmansour holds a win over the Swiss fighter, Argentina’s Scheinson has torn through the South American scene, and Khuzin has already scored a major upset over the course of the last year.

It’s a tough call as to who the tournament dark horse is. Scheinson will be making his promotional debut, but he has a plethora of experience. Khuzin’s record is deceiving, but he gained attention after besting 2016 Tatneft Cup winner Nikolay Lushin in August. He is a pressure fighter who could shock Kongolo in the semifinals, but he is still green in kickboxing competition.

Benmansour is a GLORY veteran, but he has not found much success on the big stage to date. He’ll make his second tournament appearance, having been finished by Murthel Groenhart in the semifinals at GLORY 31.

Kongolo will be fighting in his third contender tournament. He fell via majority decision in the semifinals to Karim Ghajji at GLORY 25 in Milan, and in the finals to Groenhart at GLORY 31 in Amsterdam. The Swiss fighter also challenged for the GLORY title between those bouts, going the distance with then-champion Nieky Holzken at GLORY 29.

Kongolo possesses strong boxing and powerful hands. He’s also great at countering and defending against high-volume attacks like those of Khuzin. His skills and the level of competition he’s faced cement him as the tournament favorite. A chance to avenge his loss to Benmansour from 2013 will likely help motivate the Swiss combatant, but it’s his two wins over current champion Doumbé that should leave him chomping at the bit for another crack at the GLORY belt.