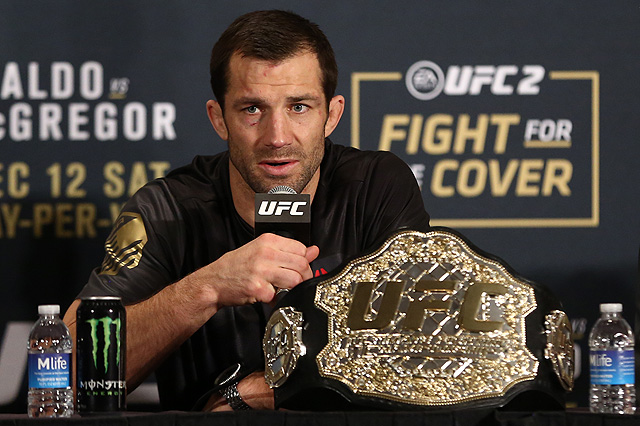 On Saturday, June 4, the UFC hosted UFC 199: Rockhold vs. Bisping II from The Forum in Inglewood, Calif.

In the night’s main event, middleweight champion Luke Rockhold put his belt on the line in a rematch with England’s Michael Bisping. Rockhold was originally slated to rematch former champion Chris Weidman, but an injury forced the New York fighter from the headlining affair. As such, Bisping stepped in on two weeks’ notice to rekindle a rivalry. The pair met in Australia in late 2014 with Rockhold earning a second-round submission win. Rockhold would go on to defeat Weidman by TKO and capture gold, while Bisping climbed back into contention by defeating former champion Anderson Silva earlier this year.

Gold was also on the line in the co-main event as bantamweight champion Dominick Cruz took on bitter rival Urijah Faber. The pair had met twice previously, with Faber submitting Cruz in a WEC featherweight title tilt in the first meeting, and Cruz edging Faber by decision in their rematch at UFC 132.

Above is live video of the event’s post-fight press conference which kicks off approximately 30 minutes after the main event between Rockhold and Bisping comes to a close (courtesy of the UFC).