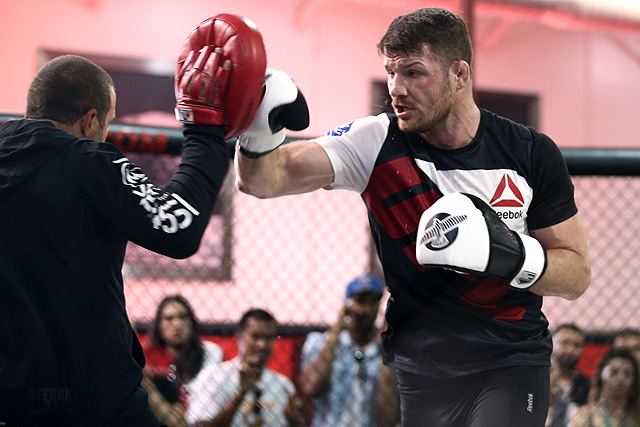 Apparently something special happens when you have three guys drinking beer and chatting about MMA.

Striking coach Jason Parillo (Instagram: @ParilloBoxing) joined Rear-Naked Choke Radio hosts Joe Rizzo (@RearNakedChoke) and Jay Kelly (@JayKellyMMA) to talk the triumphant victory for Michael Bisping at UFC 199, Anderson Silva, the connection between coach and fighter, special moments in the trainer’s career, the return of Brock Lesnar and much more in this episode of RNC Radio.

Parillo was in Bisping’s corner at UFC 199 when the Brit starched Luke Rockhold to achieve his 10-year goal of winning a UFC middleweight championship. Bisping was a massive underdog heading into the bout, yet Parillo was confident in his fighter and predicted not only the victory, but also how the fight would play out.

Parillo talked about his pinpoint prediction, what the win means to him, his connection with Bisping, who he considers a friend, and the champ’s performance.

Rizzo and Parillo found their own connection with LA Boxing. Parillo was one of the original founders of the boxing club and Rizzo used to host Rear-Naked Choke Radio from the LA Boxing facility in Paramus, N.J. The coach and the host took a stroll down memory lane and talked about some mutual friends from the past, such as Benji Radach and other fighters.

Parillo owns and operates Parillo Boxing in Costa Mesa, Calif. He explained the pros and cons of gym ownership.

Parillo walked through his own past as a coach and explained how he got the chance to work with some of the mixed martial artists at the top of the sport. Aside from Bisping, Parillo has worked with Cristiane “Cyborg” Justino and various other fighters, but one of his more notorious runs was with B.J. Penn during the former UFC lightweight champion’s title run and three defenses. Parillo detailed his past with Penn, including a hilarious story about showing up to hold mitts with one eye and one arm, as well as his journey with “Cyborg” and how she’s made improvements by instilling a “no Wanderlei Silva” plan.

Speaking of fighters he hasn’t worked with, Parillo talked about the return of Brock Lesnar. Parillo admitted Lesnar is a beast and complimented the skills he possesses, regardless of whether or not the WWE star’s chances of defeating Mark Hunt at UFC 200 are good. However, Parillo may be of assistance to to Lesnar and he talked about what it would take is the heavyweight would like to enlist the coach’s services.

Parillo shed some light on his personal life, raising twins, characteristics of personalities and how reactions affect the outcome of anything you do in life.

To cap the show off, Parillo gave us his top five favorite punchers in MMA, excluding anyone he’s trained.