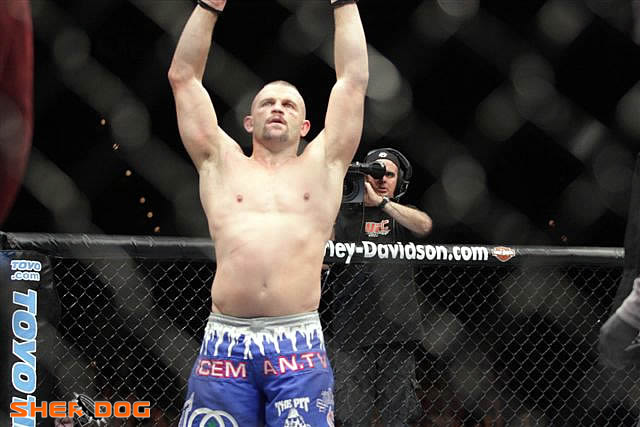 Recently, a sudden war of words erupted between UFC Hall of Famer Chuck “The Iceman” Liddell and former UFC light heavyweight champ Jon “Bones” Jones regarding who would beat the other in their prime. Initially, it seemed to be some playful banter between two confident fighters that have had a lot of success in their fight careers, but now it’s turned into a debate on what would happen in an actual fight.

The first shot across the bow came from Liddell, all the way back in April 2014, right before Jones was about to face Liddell’s teammate and training partner Glover Teixeira, whom Liddell was grooming as the next big up-and-comer in the division after his own 2010 retirement. Marc Raimondi of Fox Sports broke down his comments towards Jones, saying, “Liddell loves Jones’ overall game, but is not at all impressed with his punching power. He thinks if the two would have fought in his prime, he would have knocked Jones out.”

“I think I would have been a horrible match-up for him,” Liddell told Fox Sports. “II would have walked through his punches and he wouldn’t have caught me with anything.

“I think it’s too early to tell. If he finds his punching power — a good straight [cross], a good hook — then we’ll see. I mean, not only score with it, but hurt somebody. Then we’re talking.”

“I would have found a way to hit him,” Liddell said, “and I hit too hard”

Maybe this was just confident trash talk by a former champion toward another fighter, because his teammate is about to face him, or maybe Liddell was pondering on how easily he could beat Jones, assuming his own protégé could do the same. Nevertheless, these remarks pretty much went unnoticed by the champ at the time, who went on to defeat Teixeira in an easy unanimous decision victory to retain his title.

After that, they basically didn’t have anything to say about each other for about two years, until about a month ago when Liddell went on the The Fighter & The Kid podcast to talk about Jones, again. This time the Iceman seemed to be actually challenging him to fight:

“[Jones is] good at winning fights. If he keeps beating everybody, he’s the best right now,” said Liddell. “I still think if he fought someone like me in my prime, he would have a lot of trouble. The problem is, he doesn’t hit hard enough to hurt me and he’s not going to out-wrestle me. He’s not going to out-wrestle me and I hit too hard for him. I would catch him sooner or later.

“Styles make fights. What he does really well, if you’ve got a guy that’s a great striker, he can out-wrestle them. If he’s got a guy who’s a wrestler, he can out-strike him, out-point him. For me? I’d be big trouble for him because if he could take me down, he wouldn’t be able to keep me down — if he even got a takedown. I will hit him. I’ll put my hands on him. I could still give him trouble.”

A few days later, Jones was tweeting back and forth with fans when one of them mentioned how the retired former champion still thinks he can beat Jones. Jones responded very candidly and, in seemingly typical fashion for Jones, decided to be condescending as well:

Maybe he should've fought smarter and saved some chin https://t.co/aZGtrCwSLS

Not for the condescension to be mistaken for actual criticism, he followed up by adding some snark to it, too (via MMA Fighting):

A couple weeks later, Liddell was asked again about Jones and the mini-feud he’s having with the current title contender. He reiterated his past criticisms, but also defended how he said it.

“I didn’t say anything bad about him. I wouldn’t be mad if he said he could beat me in a fictional fight. That’s not going to bother me,” Liddell said. “If you ask me, I’m going to knock him out. Styles make fights.I wouldn’t have a problem hitting him, and sooner or later he would go down. He doesn’t hit hard enough to stop me and he’s not going to out wrestle me. Sorry.”

“He’s a great fighter,” Liddell added. “It’s like [Floyd] Mayweather, he’s a phenomenal fighter. I don’t like watching him. I don’t want to watch a guy out-point a guy just enough to win and cruise. I don’t want a guy who pulls guard at the end of the fight, with 20 seconds left, that he’s won every round in, because he’s worried about getting knocked out in the last 20 seconds. That’s not my idea of a champion.

“I don’t like that style. He has great talent and I’d love to see him go after people and try to do what I know he can do, but he’s chooses to play it safe. If you choose to play it safe, I’m not really that entertained by watching you.”

“If that’s the way you fight and you’re the best in the world, then you should be champion,” Liddell went on to say. “Whatever your style of fighting, if you’re winning by the rules that are set by everybody, you should be champion. I’m not mad at him for fighting that way. I understand it. I talk about Georges St-Pierre the same way.”

The article notes that Jones and Liddell managed to patch things up, as they took a picture (via Jones’ Instagram account) with a nice staredown cageside at UFC 196:

While Liddell still wasn’t happy with Jones, because he wouldn’t directly address him when criticizing him on Twitter, it seems like these exchanges of words the two former champs took part in is mostly competitive banter that will happen between two alpha males. In the context of professional fighters/athletes, it’s actually something that happens all the time. No big deal.

Who would win in a theoretical fight? Jones would beat Liddell. However, the Iceman has a point: he wouldn’t be taken down or held down and get ground-and-pounded, like Jones has done with so many of his opponents.

Liddell was not only an incredibly effective power striker in his prime, but he was known for a great sprawl when his opponents — a lot of whom were grapplers and wrestlers — would try wrestling with him in an effort to avoid the fate of a knockout. Some would even try exchanging on the feet with him to set up their wrestling, which didn’t end up working out. Just look at his fights with Kevin Randleman, Renato Sobral (twice), Tito Ortiz (twice), Vernon White, Randy Couture (twice) and Jeremy Horn (twice). Those were all wrestlers who also liked striking, and they all got knocked out by Liddell. Some of them, like Couture and Horn, were able to use their grappling to beat him, but those fights were earlier in Liddell’s career when he had less experience and his striking wasn’t as refined. His best years were right in the middle of his prime, which was from May 2001 to December 2006, where 11 of his 14 wins were possibly some of the most well-known knockouts in UFC history.

Jones, meanwhile, has mostly relied on strong wrestling. He used his Greco-Roman style to beat basically every one of his opponents in the UFC, finishing five opponents by submission, six by decision, as well as four by TKO. Based on Jones’ record and how he has won his fights, it’s unfair of Liddell to claim that Jones only tries to out-point whomever he’s fighting. Granted, while his last three fights have all gone to a decision, only one of them could be considered boring. For example, two of his last three fights — the ones where he went up against Alexander Gustafsson and Daniel Cormier — went the distance, but were very exciting and earned “Fight of the Night” honors. In the fights he finished with strikes, he stopped Brandon Vera and Mauricio “Shogun” Rua (for the light heavyweight title). Both of those men have been known as excellent strikers. The other two were well-known wrestlers Chael Sonnen and Vladimir Matyushenko, where he used a combination of wrestling and striking to score the finish. The submission wins were against fighters who were striker/wrestlers — Jake O’Brien, Ryan Bader and Quinton “Rampage” Jackson — with the other two coming against premier strikers Lyoto Machida and Vitor Belfort.

At the end of the day, everybody is going to have their criticisms of various fighters. Some of these critics will try to one-up them verbally, but it would be stupid to say Jones is a boring fighter. Is he more exciting than Liddell was in his prime? No, because striking is exciting to watch. Would Jones be able to beat Liddell in their prime? Yes, because he knows how to mix different styles to dominate and come out on top. Liddell was just known for his striking and being very one-dimensional, even though that one dimension was effective and done so well. That style won’t win fights against someone that has multiple ways of winning, though.

Unfortunately, Liddell’s ego blinds him from admitting he would lose. There are a lot of opponents over the years that have made the same argument as him, talking about how they would eventually catch their opponent with a punch. Ultimately, it doesn’t always happen that way, because anything can happen, especially when you factor in how the other fighter will counter the strategy. Intelligent fighters consider those factors, and while I’m not saying Liddell is unintelligent, he’s not considering all the possibilities in the new age of athletes that do more than punch someone in the face.