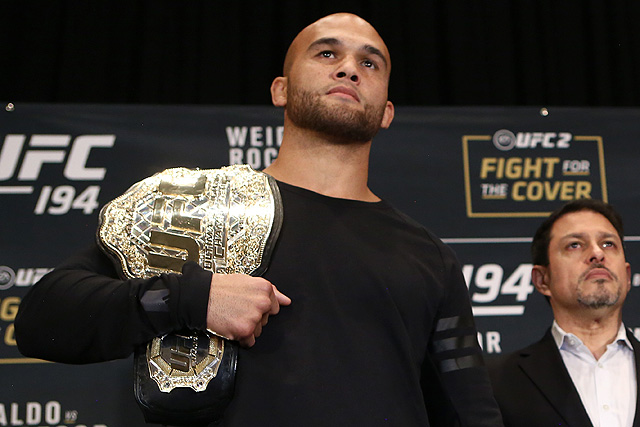 Who Should Be the Next UFC Welterweight Title Challenger?

In a world where Robbie Lawler is king, there is really no clear-cut choice for who should go to war with the welterweight champion next. And that’s what stepping into the cage with Lawler really is — it’s a war. It’s not a fight. It’s a bloodbath waiting to happen. In his rise to the top, Lawler has had some of the most exciting fights that have ever happened in the welterweight division. Albeit two of those wins were by split decision, they were fights that fans will never forget. So the question remains, who gets the chance to dethrone the “Ruthless” one?

First off, this is the one name that will probably bother a lot of fans, but not because of anything he has done. The fans are tired of the unnecessary whirlwind rematches that seem to happen while the UFC neglects the rest of the division. After watching Lawler and Condit at UFC 195, I was pretty sure a new champion was going to be crowned after the fifth and final round. However, Lawler was able to sway the decision in his favor. It was a close fight. Really, who wouldn’t want to see that again? Condit has held his own in both of his efforts to snag UFC gold, but he fell just short of grasping the title. Condit threw everything he had at Lawler for five rounds, but it just wasn’t enough. Time is ticking for the former WEC welterweight champion. The UFC should give him one last crack at the elusive gold he’s been chasing for so long.

This guy just cannot catch a break. After defeating Condit, even by injury, Woodley seemed the likely candidate to challenge for the title. The Condit fight was almost two years ago. Since then, Woodley has gone 2-1, with his lone loss coming at the hands of Rory MacDonald. Is Woodley ready to challenge for the title? No. Could Woodley bring an exciting fight to the current champion? Sure. But expect the UFC to overlook Woodley yet again, seeing as how he does not own a win (other than the one over Condit) over a top-10 welterweight. It wouldn’t be too surprising if Woodley were to sit out most of this year as well, seeing as how he hasn’t fought since January 2015. The UFC would be wise to give Woodley his title shot if the Lawler-Condit II match comes to fruition and Condit is victorious. It’s a fight the company should be able to sell.

Maia, as a welterweight no less, could be knocking at the door of a title shot. But realistically, look at his recent resume. Since moving down to the 170-pound weight class, Maia has amassed a 7-2 record, with his defeats coming at the hands of MacDonald and Jake Shields. He shut down the Gunnar Nelson hype train and derailed Neil Magny’s impressive winning streak. Maia is a fighter who could potentially give the current champ a real, live chess match. Maia’s grappling and submission skills are probably the best in the division, maybe even the best in the UFC. And really, Maia didn’t fare that badly against former middleweight champion Anderson Silva at UFC 112. The Brazilian submission ace could be a new face at 170. At nearly 40 years old, he is showing no signs of slowing down either.

Most people seem to have forgotten that Lawler vs. MacDonald II was extremely close going into the fifth round. MacDonald was picking his shots and nearly captured the title, but Lawler’s power eventually crumbled the Canadian, who has since seemingly disappeared into obscurity. The man has lost to only two men — Lawler twice and Condit once — during his six-year UFC tenure. Does he deserve another shot at the title? Not yet. What I would love to see the UFC do is finally book the rematch between MacDonald and Condit. It was set for UFC 158, but injury plagued the young fighter and he was replaced by Johny Hendricks, who was defeated by the aforementioned Condit. UFC matchmakers need to book this fight. It puts either MacDonald or Condit back in line for a justifiable title shot.

Last, but not least, “Wonderboy” joins this list. It seemed improbable that he would join the ranks of the contenders, but he proved everyone wrong with his first-round destruction of former champion Hendricks. Thompson has looked as though he is right where he belongs in the UFC. He joins this list just because of who he beat and the fact that he did what Lawler was unable to do over 50 minutes inside the cage — he was able to stop Hendricks. Does that really warrant a title shot? Probably not. But the UFC can sell the fight and the new face. Give Thompson another top-five guy and let’s see how he fares. If he is again victorious in the same fashion, there will be no denying the “Wonderboy” the coveted welterweight title shot.

Regardless of who the UFC chooses to be the next challenger, the fans will surely be in for a treat.

What are your thoughts? Who should challenge Lawler next?