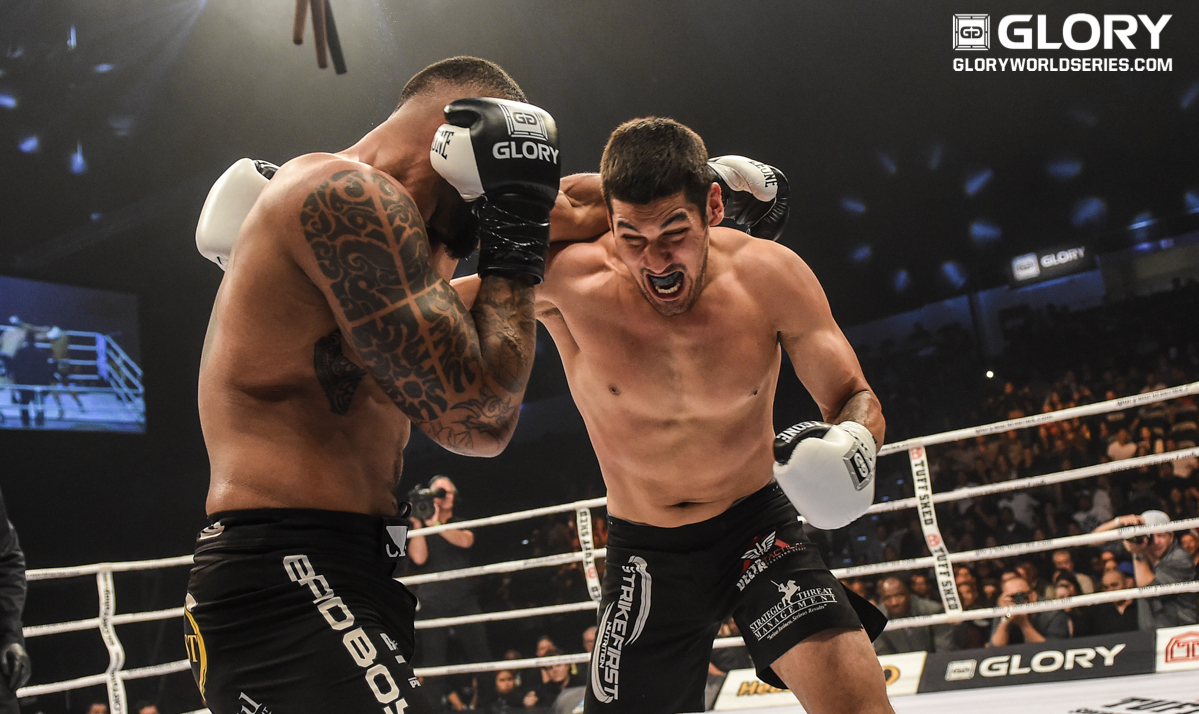 The heavyweight division in kickboxing’s current landscape is filled with high-level heavyweights trading wins and losses. Many of the world’s top heavyweights made major moves in the positive direction, but almost every top-10 heavyweight, including consensus No. 1 heavyweight in the world and GLORY champion Rico Verhoeven, also received at least one loss in 2015. The absence of top-level (former) heavyweights Tyrone Spong and Gokhan Saki furthered the need for new talent development in the sport’s heaviest division.

Vigney is a gifted athlete who began training kickboxing with Dan Black near his hometown of Oakland, Calif. Vigney found success early in his amateur career where he won amateur IKF titles at the state and national level. He won the most prestigious title in his amateur career when he knocked out Leagh Rogers in the first round of their February 2012 IKF Amateur Modified Muay Thai Rules super heavyweight world title bout.

Vigney’s success continued when he made his professional debut against UFC veteran Seth Petruzelli at a K-1 event in 2012. Vigney put Petruzelli away with one right knee to the midsection in the second round. The win earned him a spot in the 2012 K-1 World Grand Prix tournament opposite experienced heavyweight kickboxer Zabit Samedov, who has only lost to Badr Hari in the past six years. Samedov dropped “X-man” multiple times in the first round, bringing a stop to the contest despite Vigney’s desire to continue fighting.

Vigney then entered the “Road to GLORY” heavyweight tournament in June 2013. He knocked out all three of his opponents in the first round during the one-night, eight-man tournament consisting of fighters 95 kilograms and above. Vigney made his GLORY debut shortly thereafter. He knocked out ROAD FC openweight tournament participant Hyun Man Myung at GLORY 10. Vigney opted to pursue his professional boxing career in 2014, winning by knockout in his debut bout and adding a four-round decision win in his next fight.

Vigney re-entered the kickboxing world in 2015 with momentum. He used his seven-inch reach advantage to decimate Everett Sims at GLORY 19. Vigney connected with a strong left hook that dropped Sims hands first. Vigney closed the show with a massive right hook seconds later. The win earned the promising 25-year-old a spot in the GLORY 21 heavyweight qualifier tournament. Vigney knocked out Maurice Jackson and Chi-Lewis Parry to win the one-night, four-man tournament. He embarrassed the reportedly previously unbeaten Jackson, visibly hurting him with leg kicks and forcing him to turn his back with punches. Vigney entered the final against Parry with some bad blood still lingering from a confrontation at the weigh-ins the day before. The heavyweights traded blows for a round and a half before a Vigney counter left hook stunned Parry. Vigney pressed forward with a series of right hooks as Parry looked to survive against the ropes. Vigney threw in some left hands during the final strikes of the fight.

Vigney returned at GLORY 23 against a much more experienced kickboxer, Daniel Sam. Vigney used his massive height and reach advantage to land his straight punches and punching combinations at a significantly higher rate than his opponent. Vigney controlled the pace of the fight, but his movement slowed after taking repeated inside and outside low kicks from Sam in the third round.

Vigney finished the year undefeated with another first-round knockout win in his return to boxing in October. The heavyweight prospect turned in an impressive 2015, giving hope that the heavyweight division still has prospects yet to be discovered.