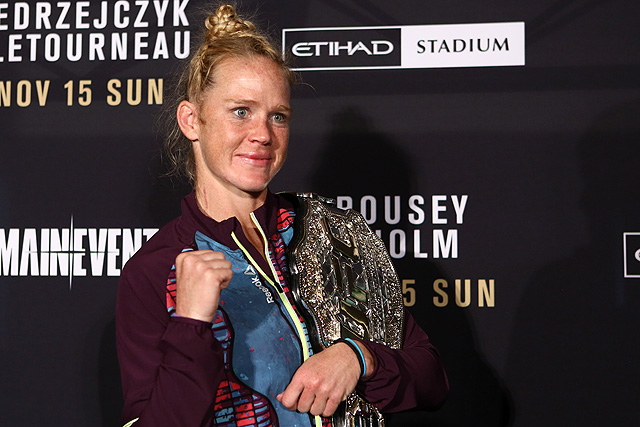 You would be forgiven if you thought the upset that everyone still can’t stop talking about — Holly Holm’s knockout of Ronda Rousey in the second round at UFC 193 — would portend bad things for women’s mixed martial arts in the UFC. That isn’t an indictment of Holm either.

After all, Rousey was the UFC (at least until Conor McGregor knocked out José Aldo in 13 seconds this past Saturday; more on that later). She graced magazine cover after magazine cover. She was named “The World’s Most Dominant Athlete” by Sports Illustrated. There have been movie roles and commercials galore. When Rousey hit the canvas in Australia after a vicious head kick delivered by Holm, it was understandable if you thought the hopes and dreams of women’s MMA in the UFC crashed with her.

However, it’s safe to say Holm made a believer out of millions of MMA fans (including this writer) with her incredibly impressive performance. She received a hero’s welcome in her hometown of Albuquerque, N.M., complete with a parade, and made the rounds on the talk-show and sports-programming circuit.

But if Rousey’s loss didn’t cause you to fret, perhaps the domination of the highly touted Paige VanZant by Rose Namajunas on Dec. 10 did. VanZant was in the same boat as Rousey. She’s a blonde bombshell who was poised to be pushed to the moon by the UFC, and she seemed likely to take over the throne as the face of the UFC once Rousey decided to depart permanently for the glitz and glamour of Hollywood.

That throne is currently occupied by McGregor. But this tweet following VanZant’s loss probably sums it up rather nicely for many people:

@FrontRowBrian this pretty much sums up Danas past few weeks. pic.twitter.com/NtVKuX13oF

But to fans of women’s MMA who fear the worst, I say this. In the immortal words of Aaron Rodgers: R-E-L-A-X.

Women’s MMA isn’t going anywhere, and it’s certainly not going anywhere in the UFC. Things have never been interesting and never looked brighter for women in the sport as we head into 2016.

First off, the big-money rematch between Rousey and Holm will happen in 2016 — maybe even at UFC 200 this summer, assuming Rousey is fully recovered by then (she recently said she still can’t eat an apple for three to six months). Regardless of when the rematch happens, it will likely be the biggest fight the UFC promotes next year. If Rousey regains the women’s bantamweight title, she will have to prove once again she is a dominant fighter. If Holm retains the title, she has a fresh pack of hungry challengers awaiting her.

I’ve written nearly 500 words and I haven’t even mentioned the other women’s champion in the UFC, strawweight titleholder Joanna Jędrzejczyk. She’s on a similar run of dominance as the one Rousey experienced, with two brutally impressive title defenses since becoming strawweight champion earlier this year. She’s also coming into her own as an ambassador for the UFC:

There is no shortage of challengers that await Jędrzejczyk either, including old rival Claudia Gadelha, a resurgent Namajunas and perhaps even Jędrzejczyk’s fellow countrywoman Karolina Kowalkiewicz, who makes her UFC debut on the organization’s next card on Fox on Saturday.

Indeed, the loss by Rousey at UFC 193 did not mark the end of anything. Quite the opposite. It marked a significant milestone in the evolution of women’s MMA.