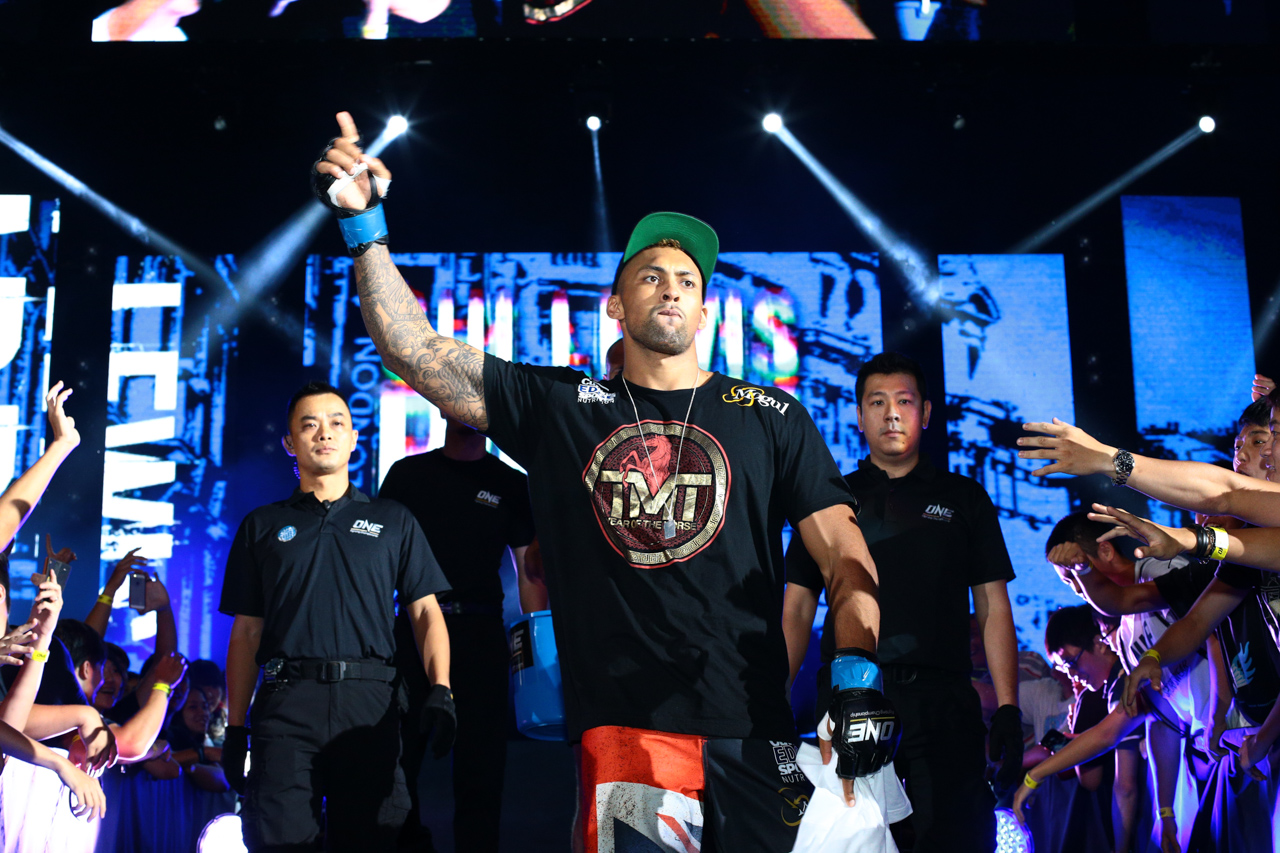 Chi Lewis-Parry: Painting The Dark Side of ONE Championship

The inaugural ONE heavyweight championship bout was scheduled to take place at ONE Championship: Spirit of Champions on Friday, Dec. 11. The menacing 6-foot-7 British heavyweight Chi Lewis-Parry was ready and willing to fight UFC veteran Brandon “The Truth” Vera after months of trash talk between the fighters. Things didn’t work out quite as planned, however.

“Chopper” is a 32-year-old fighter who is currently undefeated in mixed martial arts. The former professional basketball player has quickly burst onto the MMA and kickboxing scene with wins in both ONE Championship and GLORY competition.

The monstrous heavyweight put in a heavy workload in chasing down this fight with Vera. He called out Vera on his social media accounts in order to set up the only fight he was interested in within the promotion. Lewis-Parry believed that Vera was, “on paper,” the best heavyweight in the division, but he had his doubts of ever fighting Vera before his GLORY 21 heavyweight tournament bouts.

Vera was interviewed by GLORY staff during the event, stating his opinion on the trash talk and whether or not he believed the fight would ever take place. “If ONE FC ever says yes and the money’s right,” said Vera. “Yes, the money needs to be right. ONE FC takes care of me. They take care of all their fighters.”

The two fighters traded verbal jabs and hooks for just under a year before finally being scheduled to step foot inside the cage in October. The press conference in Manila was the starting point of what would become discord between Lewis-Parry and the promotion. In an official statement released by the promotion from ONE Vice President Rich Franklin, the organization claimed that despite Lewis-Parry’s claim that he was never scheduled to fly to Manila for the press conference, the promotion had proof on the contrary. Lewis-Parry outlined what he believed was strange behavior from the promotion. “Who has a main event as big as ONE FC, Brandon Vera for the first heavyweight title and they bring one guy out?” Lewis-Parry asked. “They made it seem like I didn’t want to go, or I was scared to go.”

The heavyweight title fight continued to be promoted heavily leading up to the event scheduled for Dec. 11. The majority of the promotion from ONE Championship was behind the fan-favorite Vera, an American from Filipino descent making his second trip to fight in the Philippines. Vera made his ONE debut against Ukrainian heavyweight Igor Subora, putting the heavy-hitting heavyweight down and out with a counter left straight. Lewis-Parry joined the War of Words Podcast and gave his opinion of what he believed was an unimpressive performance from “The Truth.” Lewis-Parry outlined his exhaustive process to fighting Vera, stating that the promotion made the journey a very difficult one. “ONE FC is scared,” he claimed. “They [have] given me the fight, but they made the whole journey, between telling me that I got it to now, very difficult.”

He also talked about the idea that ONE Championship didn’t want him to fight further. “If I win that fight, I’m going to cause so many problems for these people. They don’t even understand,” he said. “They are doing all they can to make me uncomfortable [and] disgruntle me. There is stuff going on behind the scenes that no one knows about.” Lewis-Parry believed the backstabbing would lead to the promotion doing everything it could to keep the belt out of his hands.

How did Lewis-Parry feel about putting in the time promoting the event, only to have it canceled?

“I feel as anybody would in this situation: robbed!” Lewis-Parry told Combat Press. “I put in so much work to get this fight and promote it as the biggest fight in ONE history, and this is how they repay me? I was always a small cog in the machine to them, and their actions show it.

“Amidst my disappointment, I get it. It’s a business and they wanna make money. I’m just not standing for it at my expense.”

Lewis-Parry has fought just once with the promotion, in a July 2014 bout at ONE FC 18: War of Dragons against Alain Ngalani. Lewis-Parry has therefore had experience taking the medicals and drug tests from ONE Championship for his debut bout.

“The first time I fought for ONE was in Singapore. I was sent the same requests from officials regarding medicals and bloods, et cetera,” said Lewis-Parry. “When I arrived in Singapore, they requested I take all tests again! ONE issue[s] you with a liaison officer who acts as a chaperone during your stay. I spent a whole day getting all my medical stuff done again, including CT scan. The results were back the same day and I was cleared.

“So, really, they could have solved their own claim by having me ‘re-do’ the medicals there.”

Had the promotion been able to fly Lewis-Parry in during fight week, it seems the medical and drug-testing requirements could have been accomplished during the days leading up to the event. Rich Franklin’s statement detailed that his staff was unable to reach Lewis-Parry on Monday, Dec. 7, for his flight, prompting ONE Championship to cancel the bout. The British heavyweight, meanwhile, stated that the promotion did indeed contact him, telling him that he was no longer required.

“No, they have not contacted me at all,” said Lewis-Parry. “I am as dead to them as they are to me.”

The heavyweight can barely contain his frustration with the promotion’s decision to pull him from the bout.

“Yes, I’m outspoken, but I’ve not said anything that isn’t true,” he said. “They have a track record of keeping people in the dark, especially fighters who don’t do as they’re told.”

This has been a claim made by past and present fighters with an increasingly growing regularity of occurrence. The most glaring example is the Arnaud Lepont’s account of ONE Championship’s blatant disregard for his health following a devastating knockout defeat.

“I recall having coffee with Victor, with my coach [Danny Brennan] in Singapore, to discuss my future, and he calmly admitted that he will crush anyone’s career that doesn’t comply,” said Lewis-Parry. “He wasn’t speaking of anyone in particular, but this was his mindset toward his fighters. I remember finding that very unattractive, considering I was a fan of Victor prior.

“You have to remember, for every say five guys unhappy, there’s one guy getting fat from the ONE fruits. Vera is very happy. [ONE welterweight champion Ben] Askren is also very happy. Cheng is just a happy guy in general, so he’s OK fighting for peanuts, which is what they are giving him for this fight — his words. So, of course, there are gonna be people coming out the woodwork claiming ONE treats them right, because they probably do. Let’s see if they pick someone who isn’t Evolve affiliated though. ONE Championship is a corrupt promotion. Evolve gym makes a lot of money in Singapore and the Evolve fighters teach classes there. So it’s only clever business that they orchestrate the Evolve fighters to be the titleholders. I’m veering off the mark here, but I’m just pointing out the obvious.”

ONE Championship has had ups and downs in 2015. The organization has held successful events in multiple countries, signed contracts with Chinese sponsors and put on exciting fights, but those achievements have been coupled with canceled events and fighters pulled from headlining bouts.

“ONE are in a total financial crisis! Look at their title fights [and] defenses. The championship fights are with absolute nobodies who are willing to fight for a pocket of change,” said Lewis-Parry. “They realize I’m a star on the rise and [they] will struggle to keep me happy, so they try to destroy my career instead. I’m in talks with other ONE fighters regarding a union startup. We’ve had enough!”

ONE Championship remains adamant that Lewis-Parry skipped out on the fight.

“It’s bogus,” he said. “They had three days to come up with an excuse, and that’s the absolute best they could do. It’s embarrassing. The received my medicals and they know it.”

The situation most likely won’t reach finality until Lewis-Parry and his legal team release the completed medicals and drug tests, something he is confident will be brought to light in time.

“My legal team are taking care of matters and are advising me with proceedings,” said Lewis-Parry. “However, the results will be used and posted appropriately.”

Lewis-Parry would like to step in the cage and battle, but his biggest fight right now might take place outside the cage with ONE Championship’s brass.