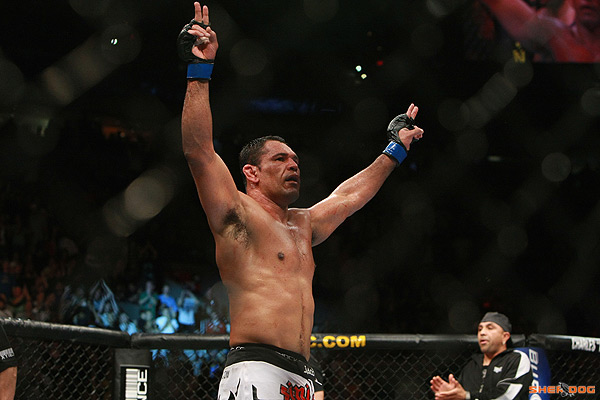 Over the course of this multi-part series, we will take a look back at the greatest upsets, comebacks and victories of Brazilian legend Antonio Rodrigo Nogueira’s 16-year MMA career. In part seven, we looked at the Brazilian’s journey through the 2006 Pride Openweight Grand Prix and his move to the UFC. In part eight, the final installment of this series, we’ll look at Nogueira’s UFC tenure.

It was Feb. 2, 2008. Former multiple-time UFC heavyweight champion Tim Sylvia would meet Nogueira in a battle of Pride versus the UFC with an interim heavyweight title at stake. Sylvia had won six straight fights before he was upset at UFC 68 by Randy Couture, losing his title after a dominant five-round decision for Couture. Sylvia had won his last fight against the once highly touted prospect Brandon Vera.

The fight between Sylvia and Nogueira began with both men looking for the advantage standing. Small, short punches landed for the taller Sylvia as the round continued. A strong right uppercut under the under arm rattled the head of Nogueira. Sylvia moved forward, throwing a left hook followed by a strong right hand that put the Brazilian down. Sylvia pounced on his fallen foe with strong right hands from the top. Sylvia wanted the fight back on the feet, though, and again peppered away at the now bloody face of the Brazilian. A series of hooks landed for Sylvia, who was asserting his control in the striking department during round one. Another heavy jab and right hand crushed into the face of Nogueira before the Brazilian finally got his opponent to the ground to finish the round.

The fighters came out to the center of the Octagon in round two. Nogueira looked to be more confident, but he still found the height advantage of Sylvia difficult to manage. The two men exchanged throughout the round. Sylvia landed the right hand and jab often, while Nogueira was able to land a solid leg kick in between the grueling attempts at taking the much bigger fighter down. Another left hand landed for Sylvia. Nogueira followed with a left hook of his own. The two men finished the round exchanging punches. It was another round in the books for Sylvia.

A deep breath came from Sylvia as he stood up from his stool. Nogueira looking battered, but not beaten. A big Sylvia right hand landed in the first 10 seconds of the round, pushing back the head of Nogueira. Sylvia stuffed another takedown attempt before Nogueira resorted to a guard pull. Nogueira feinted a punch and ducked under while grabbing the leg of Sylvia. With Sylvia looking to stand up, Nogueira moved in and capitalized on a half-guard sweep to get on top of the former UFC champion. Nogueira immediately moved to side control before Sylvia tried to roll out of the position. Nogueira let the former champion roll, locking in a tight arm-in guillotine. Nogueira scooted his legs under, establishing the guard and locking down the submission as Sylvia tapped out. The win marked the first time a fighter had won a world title in both the UFC and Pride FC.

On Aug. 29, 2009, former UFC and Pride champions collided at UFC 102 when Nogueira fought the aforementioned Couture. The 46-year-old Couture was coming off a defeat to Brock Lesnar in his second UFC heavyweight title reign. Nogueira had just lost his UFC interim heavyweight title to Frank Mir at UFC 92. However, the long-awaited clash of champions was still highly anticipated by hardcore and casual fans alike.

The two men came out in prime form, looking to exchange early. A strong right hand landed from Nogueira before the “Randy!” chants overtook the Rose Garden in Portland, Ore. Couture landed a solid punch and looked to dirty box in the clinch, a trademark of the veteran. The two men exchanged in the clinch before Couture backed Nogueira against the cage, where Nogueira landed a heavy counter right hand to the temple followed by another left and right that dropped Couture. Nogueira jumped on the former heavyweight champion, attempting a d’arce choke that Couture was able to gut out.

The two men stood back up and continued to exchange above the Bud Light logo in the center of the Octagon. Nogueira landed a heavy four-punch combination before Couture responded with two punches. Nogueira came back with a stiff jab. The two men began swinging hooks to the applause of the crowd, continuing to exchange in a single collar tie somewhat resembling the position in the wild Pride fight between Don Frye and Yoshihiro Takayama.

After an excellent round one, Couture came out aggressive again, but a strong left hook from Nogueira had Couture looking to wrestle. Nogueira, bleeding from his left eye, remained calm on the bottom before he flipped Couture over to the full mount. From the far-side half guard, Nogueira locked up the arm-triangle position and slowly looked to pass his legs through Couture’s guard. Nogueira secured the mount, but Couture remained confident on the bottom before slowly working his way to his feet, where the fighters exchanged punches again. Nogueira pushed the pace, but he was countered by a Couture left hand on his way in. The punch didn’t faze Minotauro, who pressed forward and finished another strong round.

Nogueira continued to apply pressure into the third round, landing a heavy right hand that stunned Couture and sent him back on his back foot. Nogueira pressed forward with combinations and looked for the finish. Couture made an ill-advised decision to throw a right uppercut, a punch that exposed his chin to a strong Nogueira right straight. The punch sent Couture crashing to the mat. Couture’s legs gave out, but Nogueira wasn’t able to finish the former champion with ground-and-pound, deciding to instead pursue advancing his position. Couture finally struggled up enough to get his back off the mat, but Nogueira glued himself onto Couture’s back. After a brief struggle, Nogueira ended up a little too high on Couture’s back, opening up the space for Couture to get the reversal into Nogueira’s guard. Nogueira weathered some short elbows before bucking and reversing Couture as the round closed.

The unanimous decision victory was announced in the Brazilian’s favor. With his hand raised and a gigantic smile on his face, Nogueira had just defeated another legend with an impressive performance.

On Aug. 27, 2011, Nogueira, who had a 3-2 mark in the UFC, stepped into the Octagon with The Ultimate Fighter 10 finalist Brendan Schaub in his home country of Brazil. The fight was Nogueira’s first in his native Brazil. Schaub, who was 8-1 following a huge knockout win over Mirko “Cro Cop” Filipovic at UFC 128, had the momentum coming into the bout. Nogueira, meanwhile, had been knocked out by Cain Velasquez at UFC 110 in Australia. After the loss, the Brazilian was out 18 months due to multiple surgeries on his hips and knees.

The crowd was on the side of Nogueira, who lived just minutes from the arena. The two men fought for positioning in the clinch, landing uppercuts and hooks to the side of each other’s heads. A big uppercut missed for Schaub in the center of the cage, but he landed a shot moving backward just seconds later. Nogueira didn’t want to give Schaub space, pressing forward despite eating a few punches to maintain distance. Nogueira covered distance, placing a strong jab and right hook directly on the chin of his opponent. Nogueira pressed forward, but Schaub landed his right uppercut again, following it up with a series of hooks that just missed the mark.

Nogueira, still confident in the pocket, kept pressing forward and pushed Schaub to the cage. A big right hook from Nogueira countered a Schaub right uppercut. The punch started a series of four punches from the Brazilian that put the American fighter down and out. The arena erupted as one of Brazil’s greatest fighters turned in another impressive performance.

Impressive performances littered the resume of the multiple-time champion. Nogueira had fought most of his career during the “golden era” of MMA, staying at the top or very near it for almost 10 years. With only one more win after the Schaub victory, Nogueira had already cemented his legacy as one of the greatest fighters to ever live. It was these legendary performances that defined Minotauro’s career.