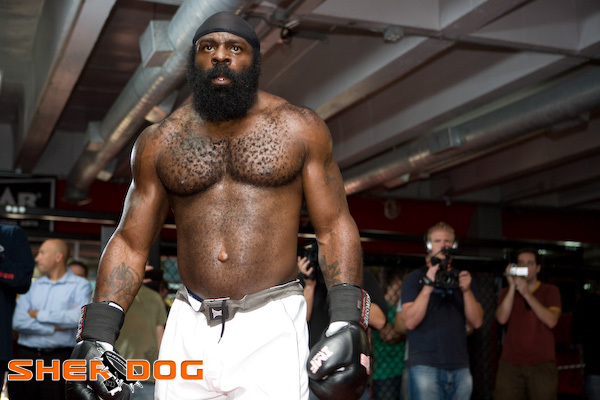 It’s finally the time for the fight you didn’t think you wanted to watch, but have now fallen in love with. Kevin “Kimbo Slice” Ferguson returns to the cage against Ken Shamrock in a fight that was supposed to happen almost seven years ago. The fight will headline Bellator 138 from the Scottrade Center in St. Louis.

Slice and Shamrock were originally slated to fight at EliteXC: Heat in 2008. That fight is infamous for being the fight that derailed the Slice hypetrain, as Seth Petruzelli stepped up on extremely short notice to knock out the brawler. Now, the two get to settle who would have won that night if Shamrock had not been cut during training.

The co-main event is a title fight in the featherweight division between champion Patricio “Pitbull” Freire and challenger Daniel Weichel. Weichel steps up for Georgi Karakhanyan with around four weeks to prepare for this fight. Freire returns after submitting Daniel Straus in his first title defense at Bellator 132.

Also, Michael Chandler looks to get back in the win column after over a year without a win and snap a three-fight losing streak. Chandler faces another Bellator veteran, Derek Campos.

Rounding out the card will be another featherweight fight between the aforementioned Straus and Henry Corrales, as well as a heavyweight tilt between Bobby Lashley and Dan Charles.

I honestly never thought this fight would get this far. Surprisingly, this is still the main event of the night over the featherweight championship fight.

Neither guy has seen any action in MMA for quite some time. The 51-year-old Shamrock has been out of action since 2010. The 41-year-old Slice hasn’t fought in MMA since being cut from the UFC following a TKO loss to Matt Mitrione in 2010 at UFC 113. Slice has competed in some boxing matches since then, however.

This one won’t hit the ground unless Shamrock decides to take it there. Slice obviously has a huge grappling deficiency throughout his career. He would rather stand and knock out his opponents. That follows a career as a bare-knuckle boxer in backyard brawls that gained popularity on YouTube.

Slice will definitely want to keep it off the ground, where he has failed to ever be impressive during his UFC tenure. The most vivid image of Slice on the mat comes from The Ultimate Fighter: Heavyweights, where Roy Nelson held him down in the crucifix position and just pitter-pattered his way to eliminating Slice from the competition. Slice was unable to do anything to escape. Even in his striking, Slice has a tendency to leave himself open and take hits. That’s not to mention the cardio problems he has as well.

However, Slice does have some extreme knockout power. Like, crazy amounts of power. No fighter wants to experience what it’s like to get hit by Slice. Slice also holds a huge age advantage as well, but that is relative considering they’re both over the age of 40.

Shamrock is 3-7 in his last 10 fights and has been out of combat sports for quite some time. Slice may be lacking in certain aspects of his game, but he will get a second-round TKO and end the night quickly.

Daniel Weichel is an injury replacement for Georgi Karakhanyan in this title fight with champion Patricio “Pitbull” Freire. Weichel knows how to choke out his opponent — most of his 21 submissions have come by choke. That’s a clear indication, too, of what needs to happen in order for Weichel to win this fight. He isn’t going to knock out Freire, but he will give him a run for his money on the ground.  Freire is a strong grappler, though, as a black belt in Brazilian Jiu-Jitsu.

Freire won’t take this fight to the ground, as he really is accustomed to winning via his striking. He is an overwhelming striker with speed and power that gives a lot of other fighters fits. The 27-year-old also has a wealth of experience from fighting the best Bellator has to offer for the last five years. His only two losses have come against Pat Curran and Joe Warren. Freire has yet to rematch Warren, but he did claim a decision over Curran at Bellator 123 in September. Weichel isn’t at the level of a prime Warren or prime Curran. Sure, Weichel beat Curran in his last fight, but Curran hasn’t really been the same for some time.

Freire should take this fight with his striking. Weichel needs a submission to happen in order to win this fight, but Freire won’t give him the opportunity to do so. Freire will retain his title with a third-round TKO.

Let’s keep this one short and sweet. This fight could comprise an article by itself, considering Bobby Lashley’s resume during his Bellator tenure and Dan Charles being another guy added to the list.

Lashley is obviously a big guy with a ton of strength, which has factored into most of his victories. Lashley looks to use his superior size advantage to take his opponent down. The thing with Lashley is his inability to submit opponents with the most basic of techniques. His fight with Josh Burns took him multiple submission tries — and I mean multiple — before he finally submitted Burns late in the second round. It looked like Lashley didn’t know how to finish an Americana. In his next fight, Lashley was able to finish Karl Etherington rather quickly at Bellator 130 with a first-round TKO, which is a plus.

Charles has won a majority of his fights on the feet. Surprisingly, all of his Bellator fights have gone to the third round. Outside of Bellator, Charles has never left the first round. Spoiler alert, I don’t see this one going three rounds.

Charles needs a knockout here, but Lashley will quickly clinch up and bring him to the ground. Lashley gets a second-round TKO victory.

Michael Chandler returns to the cage after being knocked out on the feet by champion Will Brooks at Bellator 131 in November. Chandler fights another veteran in Derek Campos, who last fought at Bellator 126 in September.

Chandler, who is riding a three-fight losing streak, is in an interesting position in Bellator. After a pretty dominant title reign, he lost his rematch to Eddie Alvarez in November 2013. Then, Chandler had another shot at the interim title against Brooks and lost by decision. Brooks then knocked out the 27-year-old violently six months later.

Chandler seems to have hit a wall, which is surprising considering his age. While their fight was entertaining, Brooks decisively beat Chandler. Chandler’s striking defense is something that can’t be overlooked. He is a tough fighter with a lot of power, but he doesn’t fight smart and tends to take more shots than he should. His defense is to throw a counter shot harder than the prior shot he absorbed.

The wrestling edge, however, is firmly in Chandler’s corner. The former Missouri wrestler needs to use those skills if he wants to avoid the striking in this fight and take it to the ground. It wouldn’t be surprising if Chandler, after being knocked out by Brooks, goes that route here to have an easy night and avoid getting hit.

Campos looks to control fighters inside the cage. He will have a hard time getting Chandler to the ground, though. Campos was able to get a quick knockout over Estevan Payan in his last fight, but that seems to be an anomaly, as he earned a decision victory in a majority of his Bellator victories.

It’s difficult to see Campos getting this one to the ground. Chandler has a bigger range of methods to victory here. He’ll score a TKO finish in the second round.

This could be a very easy fight for Daniel Straus if he fights like he did against Patricio “Pitbull” Freire in his last fight. Straus really took it to Freire and seemed like he could possibly end up taking the belt home. However, Freire eventually found a way to submit Straus and end the fight without fully seeing if Straus could take the decision.

Straus looked good in that fight and displayed improved striking. That helps Straus implement his wrestling by setting up the takedowns more easily with combinations. Straus, with his wrestling background, is most comfortable on the ground. He can easily dominate any fighter if he can take the fight to the ground.

That is probably what we’re looking at here from Straus. The 30-year-old will seek to take the contest to the mat, where he can force his will upon Henry Corrales.

Corrales is undefeated at 12-0 after spending the last two years fighting for King of the Cage. He has finished 10 of his opponents and demonstrated knockout power in his last fight with Aaron Neveu. Corrales also has a submission arsenal and has picked up six victories by way of tapout.

The game plan for Corrales is going to be to stop the takedown. That should be the primary objective. Corrales needs to stay off his back if he wants to win this fight. If he can counter with a tight guillotine choke if Straus leaves his neck out, even better.

However, it’s Straus who should take this fight by decision. He won’t make a mistake and allow Corrales a chance to submit him. Expect another strong performance from Straus.