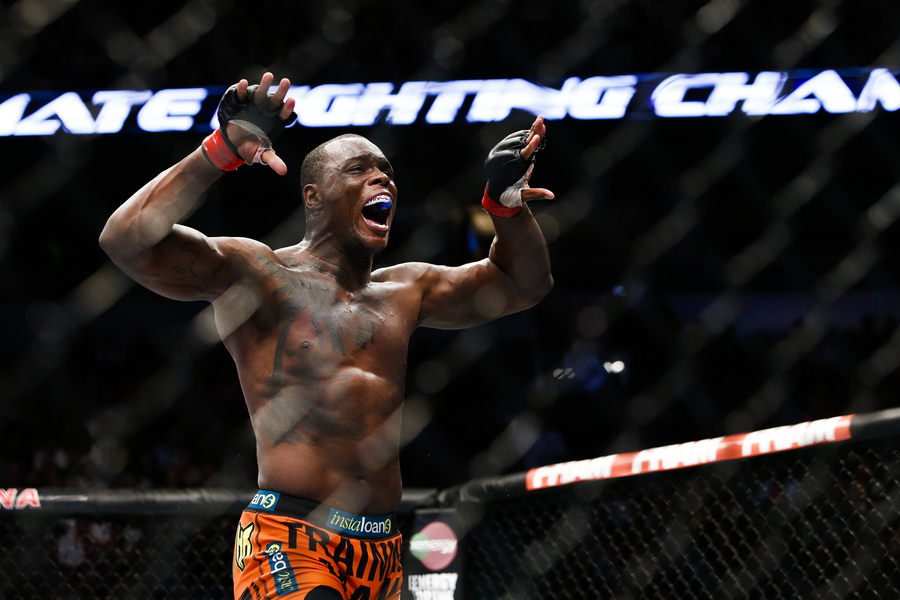 In the main event of the evening, former UFC light heavyweight champion Mauricio “Shogun” Rua took on Strikeforce veteran Ovince Saint Preux. Shogun was originally slated to face Jimi Manuwa, but a foot injury to the British fighter forced “OSP” into main event duty. The 32-year-old Rua had been out of action since March when he engaged in a firefight with Dan Henderson. The Brazilian came out on the wrong end of a third-round TKO and was looking to get back in the win column. Saint Preux, meanwhile, was also be looking to rebound from a loss. The former Tennessee football player lost for the first time in the Octagon in August, losing a five-round decision to Ryan Bader.

The co-main event was slated to feature a flyweight duel between Ian McCall and Brazil’s John Lineker. However, McCall came down with a viral infection and was forced out of the bout. As such, a welterweight contest between Warlley Alves and Alan Jouban was tabbed for the co-headlining slot.

The 10-fight event kicked off Saturday with five preliminary card bouts on Fox Sports 2 at 8 p.m. ET, with the five-fight main card airing at 10:30 p.m. ET on Fox Sports 1.

Ovince Saint Preux earned the biggest win of his career, stopping former champion Mauricio “Shogun” Rua in under a minute. OSP connected with a left hook as Shogun came forward, sending the Brazilian to the canvas. Saint Preux followed with a series of left hands that forced referee Mario Yamasaki to waive off the bout.

TUF Brazil 3 winner Warlley Alves used a big first round to claim a questionable decision win over Alan Jouban. Alves rocked Jouban just seconds into the fight and flurry for the finish. Jouban survived, but was forced to defend a deep guillotine attempt. Once recovered, Jouban scored with kicks to the body of Alves, which drastically slowed the pace of the Brazilian. Jouban turned up the volume of his strikes over the final two rounds, but it wasn’t enough as the judges gave the nod to Alves.

Welterweight Claudio Silva eked out a split decision win over promotional newcomer Leon Edwards. Silva earned an early takedown, but Edwards scrambled to his feet and opened up with his striking. He frequently clipped Silva with a counter, lead hook. The second frame was all Edwards for the first four minutes, as he battered Silva with strikes. Silva took Edwards down and took his back in the final minute, but couldn’t find a finish. Silva again put Edwards on his back and passed to the mount in the final round, convincing two of the three judges to award him the win.

Returning to the welterweight division, TUF 19 runner-up Dhiego Lima battered late replacement opponent Jorge de Oliveira to claim a dominant decision victory. Oliveira clipped Lima early, prompting Lima to take the fight to the ground. Once on the mat, Lima took over. He effortlessly moved to mount and threatened to finish with an arm-triangle. Oliveira survived, but was forced to defend a rear-naked choke attempt in the middle stanza. The pace slowed in round three, but Lima again earned the mount and rained punches to seal the win.

Kicking off the main card, Brazil’s Juliana Lima gave Nina Ansaroff a rude welcome to the Octagon, earning a hard-fought unanimous decision win. Lima scored with a trip takedown early in round one and kept Ansaroff on the ground. In round two, Lima caught a kick from Ansaroff and again returned to the ground, but was forced to defend an armbar. Ansaroff was desperate in round three, but couldn’t find a finish, failing short in the eyes of the judges.

In a battle of TUF: Latin America castmates, Diego Rivas outworked Rodolfo Rubio to claim a unanimous decision win. Rubio was wild in the early going, allowing Rivas to take the fight to the ground. Rivas showcased superior top control throughout the fight, frequently pinning Rubio to the canvas. Rubio had his moments, taking the back of Rivas multiple times, but he was unable to find a finish. Rivas earned the fight on all three scorecards.

Middleweight Caio Magalhaes needed just 31 seconds to dispatch of Trevor Smith by knockout. Magalhaes delivered a huge knee that rocked Smith. As Smith crashed to the mat, Magalhaes rained hammerfists and the referee halted the bout.

Lightweight Leandro Silva earned his fourth win of 2014, but his first in the Octagon, with a first-round submission win over Charlie Brenneman. Brenneman used his wrestling to plant Silva on the ground early and scored with ground and pound. Silva was able to scramble back to his feet and was able to take Brenneman’s back along the fence. Once there, he sunk in a rear-naked choke and coerced a tap from Brenneman.

Brazilian Thomas Almeida stayed unbeaten, scoring a unanimous decision win in his Octagon debut over a game Tim Gorman. Gorman scored with a takedown early and threatened with a rear-naked choke, but Almeida escaped and opened up with his striking attack. Gorman fired back, bloodying the face of Almeida, but it wasn’t enough.

Welterweight Colby Covington kept his undefeated record intact, scoring a third-round submission win over Wagner Silva. Covington’s wrestling game the difference from the very beginning of the fight, as he was able to put Silva on his back multiple times. In the final round he took Silva’s back and locked in the fight-finishing rear-naked choke.