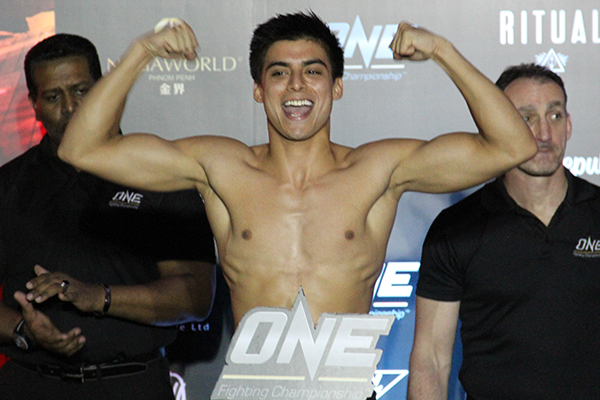 ONE FC’s Stephen Langdown: Harnessing the Power of the Internet

Countless hours are spent every day trawling the internet. Whether it’s Facebook, YouTube or Google, there is something out there for everybody. Some people waste away their lives, forever looking for something new and exciting. It’s no secret, there are things out there on the world wide web that can ruin lives. There’s a plethora of black holes that one can fall into, but there are also things out there that can help someone find their purpose in life.

It took just one upload to steer Stephen Langdown toward a life-changing contract with ONE FC. Now that’s what you can call time well spent.

“I had posted a video of me doing pad work and some other stuff on Sherdog’s forums to get feedback on my form and technique,” Langdown explained to Combat Press. “Apparently a ONE FC scout saw the video. They reached out to me and I was over the moon. Shortly after, I signed with them. The intention was never to use the video to get signed, but it all worked out great.”

Before he posted his video online, Langdown was heading down a path that would see him undertake one of the toughest jobs in the world. He was working in law enforcement, where every day presents its own challenges. Luckily for him, the right things fell into place to allow him to continue developing his mixed martial arts career.

“When I first started training, I was doing National Service, serving in the Singapore Police Force,” Langdown said. “I did two years with them, and upon completing my two years, I signed with ONE FC. From there on, I trained full-time to get ready for my ONE FC debut. [Now] I am a freelance personal trainer, which is great, as I can be very flexible about my schedule and can fit training for my fights in easily.”

Not every fighter gets to experience a professional debut on the global stage of ONE FC. Langdown was lucky in that sense. He made his debut almost a year ago to the day of his next ONE FC bout. His opponent was Marc Marcellinus, and Langdown emerged with the TKO victory in less than two minutes.

“It was incredible, definitely the most surreal night of my life,” Langdown admitted. “Leading up to the fight, all I could do all day was think about fighting. I probably fought Marc a thousand times in my head, at least. Finally, the day came. I walked out into the stadium and it was crazy. I got in the cage, fought and won. It was an amazing feeling that I aim to replicate in Malaysia.”

The last time that Langdown entered the ONE FC cage, he came up short, succumbing to a rear-naked choke submission against undefeated Casey Suire. It was the first time in his short professional career that Langdown had lost.

“Obviously, losing sucks,” Langdown confessed. “But I think it also has plenty of positives as well. It taught me a lot and has lit a fire in me now to never have to feel that again. We all have to lose eventually. Better now than later.”

Langdown’s next bout comes on Oct. 17 when he faces Raymond Tan at ONE FC 21 in Tan’s home country of Malaysia. Langdown, coming off his first professional loss, has to be feeling some added pressure.

“This fight is extremely important for me,” Langdown admitted. “I’m 1-1 now, and losing would mean a negative record. I definitely don’t want that, which is why I’m busting my ass every day in the gym to make sure I go there and get the win. It’s his home country, pressure is on him. All I have to do is go out there and put on a show.”