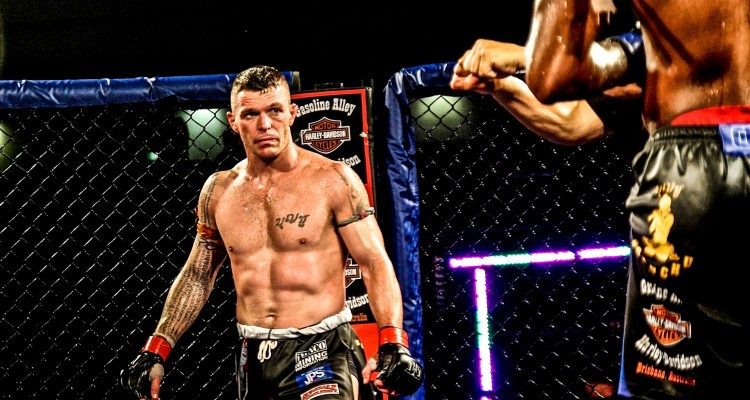 John Wayne Parr: A New Perspective on the Fight Game

Blood trickled down his face and the pain started to become unbearable. This is what over two decades of dedication and passion had led to. There he was, in a hospital bed with a forced smile that was somehow still on his face. Pain was shooting through his body, like a car making its way around a speedway, over and over and over again. Nothing was really making sense.

John Wayne Parr was, as they say, in a world of hurt.

“My last fight was at the end of June and I broke two orbital bones, one near my sinus and beside my eye socket, so I had some time off. My eye is fine now, but I’ve got some nerve damage on the left side of my face,” Parr revealed to Combat Press. “It’s been 14 or 16 weeks and it’s still exactly the same as it was from the day I done it, so I’m not sure what’s gonna happen in the future. It’s pretty scary. I’ve never really had a severe injury like this before. Hopefully it comes back again, but at this stage it’s just a bit scary.

“It doesn’t hurt, but it’s always pins and needles, 24/7. If I touch the top of my lip, I can feel it vibrate on my eyelid and vice versa. If I touch my cheek, I feel it on my lip. If I take a sip of any kind of fluid, the whole left side of my face goes super sensitive and it all starts tingling—it’s really crazy. It feels like I’ve always got a wet face. It feels like I’ve splashed water on my face, and then when I go to wipe it, it’s always dry and I just think, ‘Fuck, what’s going on? Why’s my face so crazy for?’”

As far as injuries go, Parr’s body has taken a lot of punishment over his years as a fighter. Countless stitches, bruises and cuts come with the job description. What he sustained in his last fight, though, that was unlike anything the 38-year-old had ever experienced before.

“I’ve had 120 fights,” Parr said. “I usually get stitches and get a sore leg, or sore ribs, or sore forearms, but to have something of this magnitude, where it’s not healing? And because it’s my eye as well, I was kinda like, damn, I don’t wanna go blind and I don’t wanna have permanent facial damage. I’ve always said in my career that I’ll go until my body says no more, and this is the first time that I’m thinking, ‘Ahh, shit.’”

When an injury hits an athlete in the midst of competition, it can be a devastating feeling. For Parr, that night was the most painful of his career. However, in true Parr fashion, he still sees a funny side.

“What went through my mind? Old mate’s elbow [laughs]. As soon as it hit, my vision was all blurred and it felt like someone hit me with a chisel,” Parr explained. “The pain was really intense, and I did the right thing and waited for the referee to bring it together. And they raised his hand and declared him the winner, and then I just got out of the ring and I wanted to climb under a rock. I went to the back room and the doctor that I use in my corner, he had a painkiller, and he gave me that and said it should kick in within a couple of minutes, but then nothing, and then another injection and nothing, so they had to take me to the hospital.”

Despite the forced hiatus, Parr hasn’t stopped being involved in the sport that has dictated his life. He cherishes the ability to continue to see the world and partake in something that he loves. From here, things are bound to keep getting bigger and better for the Muay Thai veteran.

“Ever since I trained with Georges St-Pierre, I’ve definitely gotten a higher profile,” Parr admitted. “At the end of last year, I was lucky enough to do seminars in Norway, New Zealand, just all over the shop. Three weeks ago, I got back from Hong Kong. Just when I thought that fun was gonna be over when I stop punching people, I can continue to go around and teach people and see the world. My whole goal is to see as many countries as I can through the sport, and so far I’ve gone through three passports.”

Not wanting to rest on his laurels, Parr has decided to expand on what life after fighting means to him. On Oct. 17 at the Southport Sharks in Southport, Queensland, a new chapter begins for Parr. There are no gloves involved, only a microphone. Parr is engaging in a night of motivational speaking.

“I had a bit of time off and I thought, ‘How could I stay relevant in the sport and the scene?’ I just don’t wanna disappear and go into obscurity,” Parr confessed. “I believe I have a very fascinating story where I went to Thailand back in ’96, before it was considered trendy. Now, it seems like it’s a cool thing to go over to Phuket and do some training, get drunk and party. But when I went—I went to Bangkok—I was the first Australian to really go over there and put Muay Thai on the map.

“When I got over there, none of the Thais even knew that Australia did Muay Thai. And I got the opportunity to fight and was the first Aussie to do the King’s birthday. And I climbed the ranks and got on the front cover of magazines, and I was a regular on Thai TV. And I became a little bit of a household name in the sport over there. I just wanna tell people that it wasn’t all rainbows and unicorns. There were so many times that I wanted to come home. The fact that during training, the Thais, they would just look at you like you’re a dog, and they would tell you to your face, ‘What are you even doing here? Why don’t you just go home? You’re wasting our time.’ But I stuck it out and ended up winning two world titles in Bangkok and ended up getting runs on the board. I don’t wanna blow smoke up my own bum, but I think it’s all pretty cool.”

With his motivational speaking, Parr hopes to be able to share his story with a wide variety of people. Sure, there is an obvious targeted audience, but it’s not all about fighting. It’s about life and the journey that it takes you on.

“Hopefully, the younger generation of fighters [will hear the story],” Parr explained. “And just anyone, even business people or anyone that wants to fulfil a goal. It’s just about that determination and that grit, and no matter what life throws at ya, if you stay focused, you can fall down and get back up and dust yourself off. It may not happen straight away, but if you keep at it, then for sure it’s gonna happen.

“I just wanna try and push everyone. You know what they say: you’ve got one life, why screw it and work for someone else and do something you hate when you can go out and make a name for yourself? At the end of the day, when you’re dead, what’s your legacy? Who do you wanna be? What do you wanna be remembered for? Do you wanna be that guy that was picking up rubbish your whole life? Or do you wanna leave a legacy so that your kid can say, ‘My dad was awesome,’ or, ‘My mum was awesome.’”

John would like to thank Richard Vell and Mass Nutrition. He would also like to thank his wife, Angie, who has supported him for the last 12 years—”She has been my rock,” he adds. Follow Parr on Twitter: @johnwayneparr
Advertisement