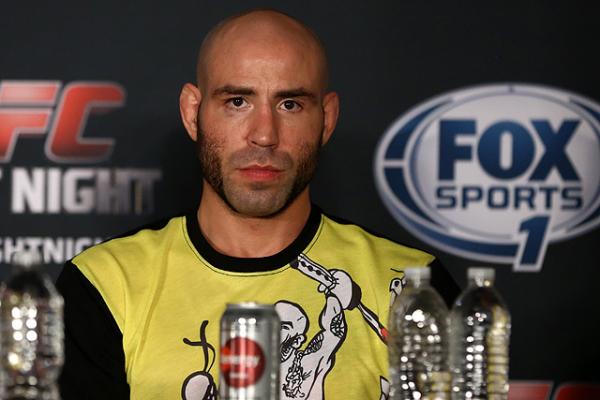 For 95 percent of the fighters in the world, a UFC pink slip is the same thing as an MMA death sentence. It takes years, sometimes close to a decade, for fighters to make their way to the big show, and for many competitors the blow that comes with the loss of a UFC contract ends up being too much to overcome. Most fighters never make it back, and the few that do usually end up back on the unemployment line before long. The fact is, most people never get the chance to live their dream, and in a career field as fickle as MMA, it’s nearly impossible to get that opportunity twice.

That’s what has made this latest batch of UFC returns so strange. Over the last year, we’ve seen a former champion in Andrei Arlovski come back and squeak out a decision over Brendan Schaub in order to climb back into the heavyweight rankings. “The Pitbull” is now set to headline his first UFC event in eight years when he fights Antonio “Bigfoot” Silva in September. Anthony “Rumble” Johnson was written off as wasted talent when he was cut after missing weight multiple times as a welterweight and middleweight during his first UFC run, but less than three years later he’s now one of the most terrifying fighters in the light heavyweight division. And last but not least, Ben Saunders made a successful return to the Octagon last weekend after spending the last few years battling it out in Bellator tournaments. In his return to the Octagon, Saunders scored the first omoplata finish in UFC history when he tapped Chris Heatherly.

It’s relatively easy for fight fans to figure out how much Arlovski and Johnson are going to make of their second chances inside the Octagon. Arlovski barely snuck past Schaub in his UFC debut, and even a win over Silva later this year isn’t going to force anyone into thinking the Belarusian is going to be getting his belt back anytime soon. Rumble has already proven he’s for real at 205 pounds with wins over Phil Davis and Antonio Rogerio Nogueira, and the only question surrounding Johnson is how far he can take his newfound contender status. Saunders is a different story.

From his first UFC stint and throughout his Bellator career, Saunders has somehow found a way to undermine all of his accomplishments with ill-timed losses. Whether it’s knocking out the once indestructible Marcus Davis and following it up with two lackluster decision losses that led to his UFC departure or constantly impressing during the Bellator tournament only to fall short of the title bout, Saunders has consistently stumbled when he’s had big opportunities head his way. And while it looked for a second like Saunders was going to be able to ease his way back into the fold when the UFC assigned him the unknown Heatherly in his return, “Killa B’s” highlight-reel finish is likely going to push him into a fight with a quality opponent in his next bout.

If we’re ever going to see something different from Saunders, the time has to be now. At 31 years old, he is still in his prime. While it’s doubtful that anyone sees a UFC title in his future, a spot in the UFC rankings doesn’t seem like it should be out of reach. In fact, with the welterweight title scene still reeling from the departure of Georges St-Pierre, it’s entirely possible that Saunders could find himself in the position to fight a top-10 guy within his next two fights. He’s an exciting fighter with ties to The Ultimate Fighter in an era when it still held some clout, and it’s not hard to envision the UFC giving him a quality opponent like Jake Ellenberger or even one of Saunders admitted favorites, Matt Brown, with another win.

The thing is, Saunders hasn’t really given fans any reasons to consider these situations plausible. Fight fans have waited time and time again for Saunders to make the leap to the next level, but his constant inability to do so is going to make fans hesitant about this UFC stint going any better than his first. The omoplata finish is sure to get people talking, and it’s likely a frontrunner to win the “Submission of the Year” for 2014, but Saunders has won spectacularly over lackluster competition so many times that it’s hard not to take the “fool me once” mentality when he wins impressively.

As much fun as it is to have an exciting fighter like Saunders back in the welterweight fold, his future in the division is still up in the air at the moment. Whereas Arlovski and Johnson were welcomed back into the fold with open arms and thrown into high-profile spots, Saunders was relegated to the prelims for his return and has a good chance at ending up there in his next bout as well. Saunders is going to have to work his way up the UFC ladder the same way he did the first time he was in the promotion, but this time the first slip-up is going to signal Saunders’s swan song as a relevant welterweight. His past suggests a slip-up is likely going to come sooner rather than later, but Saunders already has defied the odds once and earned a second chance at the Octagon. Maybe he can defy those odds again and make the most of this opportunity.