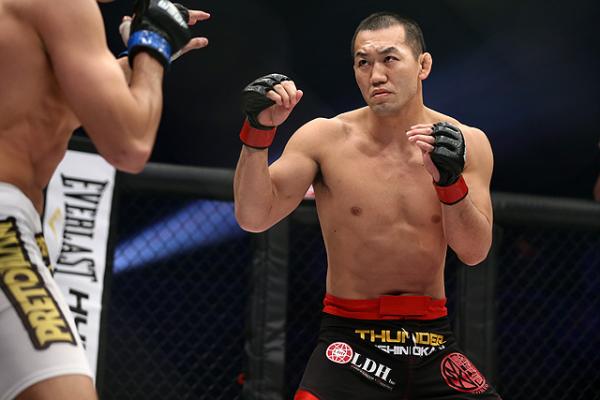 Yushin Okami Discusses His Bout with Leandro Ataides at ONE: Heavy Hitters

At ONE Championship: Heavy Hitters, Japanese mixed martial arts veteran Yushin Okami returns to the middleweight division in an attempt to make another run toward the top. His first step on this quest will be fierce, as he comes up against Brazilian Leandro Ataides on Friday, Jan. 14.

Okami’s road to Singapore for this matchup has hardly been filled with sunshine and rainbows. After his first victory in ONE Championship, Okami had to reignite his fire for the sport and decide which division he wanted to compete in.

“I had a lot of time, so I thought deeply about what I needed and what I didn’t need while I worked on it,” said Okami. “I’ve been working furiously with the fighters who fought the matches with the same sense of tension, fighting and sparring with them. I was able to keep the flame of being an active fighter alive by fighting with them. There were times when I felt like I was going to shift my focus from being an active fighter to being an instructor. But by training with them, I was able to make it this far without extinguishing my flame. I’m thankful to them.”

Okami last competed at ONE Championship: Century in Tokyo in 2019, where he earned a win over Agilan Thani. After a rough start to his ONE tenure with back-to-back losses, the Japanese star felt the pressure wash away after getting his arm raised.

“It was the most relieving and joyful victory I’ve ever had,” said Okami. “A little weight has been lifted off my shoulders. I had lost two fights in a row at ONE, and I needed to win here. Three losses in a row would have been tough for me as a fighter.”

Now moving back to middleweight, Okami will take on Ataides to gauge where he stands in the division. The Brazilian workhorse has a top-tier ground game, and his power has propelled him to six knockouts during his career. This tough bout against a stalwart opponent is a challenge Okami fully embraces, though.

“Ataides has been fighting and shining in ONE for a long time, and he is the iconic middleweight fighter of ONE,” said the 40-year-old. “Of course, his strengths are his physicality and power. He gathers all his power and attacks at the right moment.

“His weakness is that he has rough and messy parts. If I point out those parts of him carefully, I think his vulnerability will come out. He has a lot of strength, but that kind of roughness comes out when he attacks and defends.”

Okami understands that Ataides will be looking for the early knockout, and while the Japanese star wants to get a knockout of his own, he is willing to exploit the technical holes he sees in the Brazilian’s game for the full 15 minutes.

“The saddest thing for me as a competitor is to feel too much pressure and nervousness, and not be able to show my strengths,” Okami said. “I want to put aside the pressure and nervousness and just keep hitting him for 15 minutes. Ataides is a highly evaluated fighter, so if I beat him, the number of fighters above him will be limited. I don’t have time to take it easy and take a lot of fights because of my age, so if I can beat him, I’ll be able to get a middleweight title fight soon.”

While a title opportunity is on “Thunder’s” mind, there is another big name that has been on the tip of his tongue. For months, Okami has had exchanges with former two-division champion Aung La N Sang on Twitter. The two martial artists have mutual respect, but both want to stand across from each other inside the ONE Circle at some point.

“When I thought about making a comeback to the middleweight division, the only fighter I wanted to fight was Aung La N Sang,” said Okami. “That’s where I came up with the idea that I want to fight him. Another thing about Aung La N Sang, I knew him before I came to ONE, and I respected him. He’s an Asian, he’s been a champion in the middleweight and light heavyweight divisions, and his content of fights were great. And I was proud of him as an Asian.

“But what I’m thinking about the most is to win the ONE middleweight world title. I want to win the belt. He’s in the process. I’m sure he’ll be waiting for me. I’m going for the belt, and he will be there. Fighting him has a special meaning for me.”

But before he can challenge “The Burmese Python,” Okami will have to prove he is a top middleweight threat by dispatching Ataides. With bigger goals laying ahead for 2022, Okami will try to make the thunder heard right away as he gets back inside the Circle.