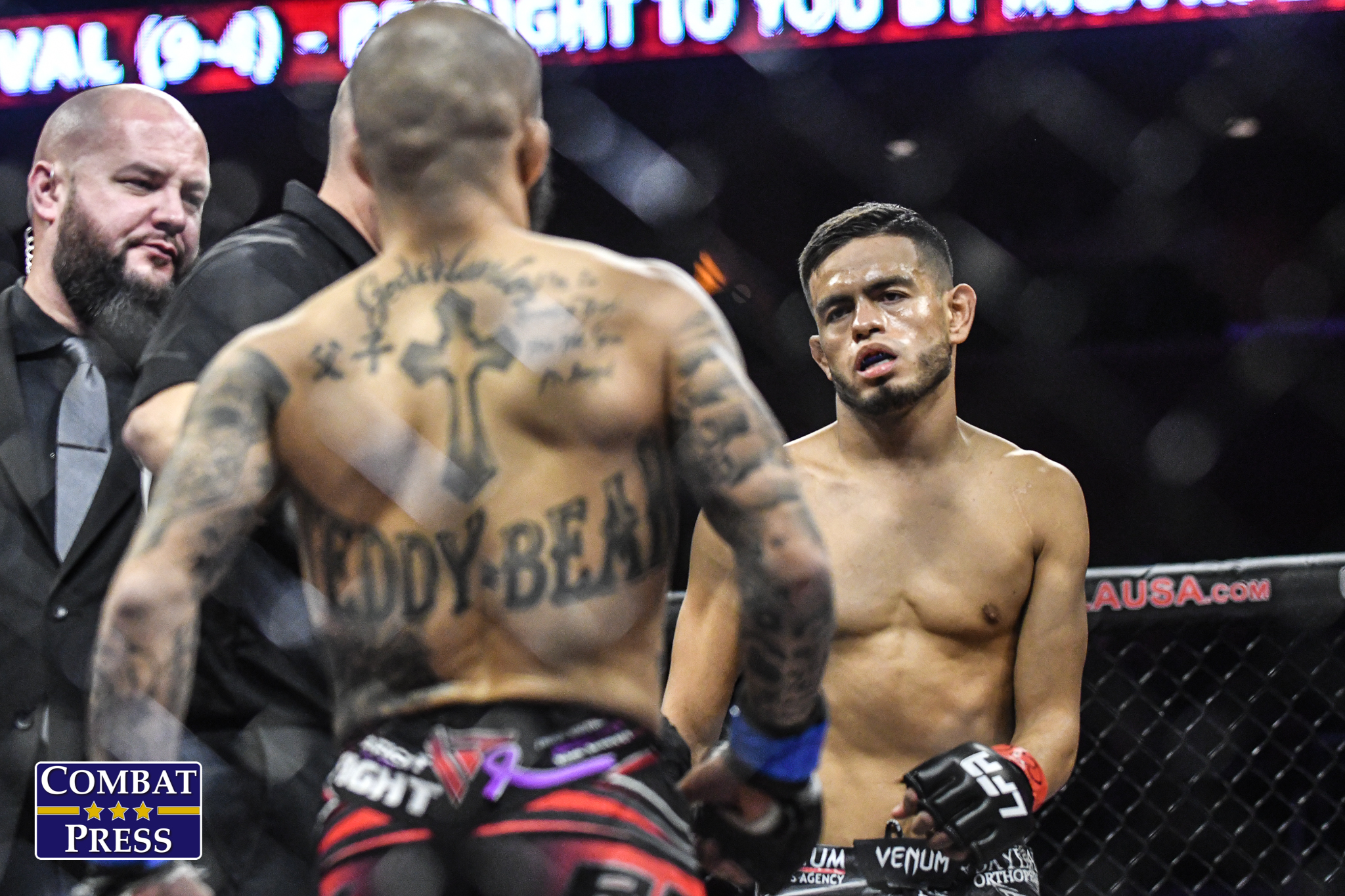 Let’s examine the flyweight division, a weight class that has come close to eradication from the UFC. Despite signs of its imminent demise, it’s still hanging on for now. Therefore, we will still look at the best prospects the division has to offer, even if they eventually land in the UFC’s bantamweight division instead.

It’s hard to call a 35-year-old with 32 fights under his belt a prospect, but that’s what we have in Yunus Evloev. He should be on the UFC roster right now. The Russian has faced a plethora of top competition in the regional scene and has been ready for the big show for years. His only loss in the last five years came to UFC veteran Magomed Bibulatov.

Evloev is a well-rounded fighter. He has a solid boxing acumen, which explains why he mostly uses his hands. He’s also good on the mat, where he has displayed strong wrestling and submission skills. He’s even dangerous off his back, where he scored several triangle-choke victories. In 2019, Evloev added wins over the previously undefeated Azam Gafarov and Brazilian prospect Josiel Silva.

The one knock on the Russian is his tendency to fight to a decision. However, this criticism can be countered with the argument that flyweights generally have a lower finishing rate. It also shouldn’t matter given the resume Evloev has built in his career. He has not taken easy fights, and he runs toward the fire. Whether it’s at flyweight or bantamweight, Evloev should have a spot on the roster of the world’s largest MMA promotion.

Canada seems to be at a crossroads in its production of MMA talent. Not long ago, the nation was a bastion of MMA prospects. These days, that reputation seems to be lessening. However, Malcolm Gordon is a guy flying the Canadian flag, and he’s turned himself into a flyweight that should be sought out by top promotions.

Gordon is primarily a grappler, possessing strong jiu-jitsu ability and good submission skills. Most of his wins, including his last three, have come by way of tapout. The Adrenaline MMA fighter competed just once in 2019, but he claimed the TKO flyweight championship with a rear-naked choke of The Ultimate Fighter alum Yoni Sherbatov. Gordon has a strong resume, with notable wins over the aforementioned Sherbatov and UFC vet Chris Kelades.

The UFC loves finishers, and Gordon is known to get the job done. He’s one of those kill-or-be-killed types. That’s the kind of guy UFC President Dana White wants on the UFC roster. Gordon is clearly a talented athlete that could help fill out UFC cards in Canada.

If there has been a flyweight in the United States who has had a tougher schedule outside of the UFC than Brandon Royval, we haven’t seen him. The 27-year-old Factory X product has been a staple of the Legacy Fighting Alliance. He has long taken on the best competition available and impressed in those bouts, even the ones he’s lost. Given this experience and the vast improvements in his game, he’s ready to call the UFC flyweight division home.

Royval captured the LFA flyweight crown in 2019 via a 23-second armbar over grizzled veteran Nate Williams. The impressive main-event performance was a follow-up to his only other 2019 outing, an armbar victory over UFC vet Joby Sanchez in just over three minutes. Royval is a very exciting and well-rounded fighter. He has a very good ground game, plus knockout power on the feet. He’s a finisher — something the UFC loves — and a very tough dude. His last three losses came to UFC vet Casey Kenney and Dana White’s Tuesday Night Contender Series alums Nick Urso and Ricky Palacios.

Royval is a no-brainer to bring to the UFC flyweight division. He’s a top regional champion with a fan-friendly style. He doesn’t take gimme fights and is seemingly willing to fight anybody. This should be rewarded with a shot in the UFC.

Not long ago, Justin Scoggins graced the UFC’s Octagon and found some success. His little brother, 24-year-old Jared Scoggins, has blazed his own path on the regional MMA scene and looks to be ready for his turn at the big show.

Jared, like his brother, is a well-rounded fighter. He has solid traditional martial-arts striking, complete with good kicks, powerful punches, and good movement. Most of his wins have come by way of knockout, whether it’s in the realm of stand-up or ground-and-pound. The Revolution MMA fighter also has solid wrestling, which he uses both offensively and defensively. Unfortunately, his only fight of 2019 was canceled — he was set to compete for the LFA flyweight championship against Brandon Royval.

Scoggins owns a victory over Titan FC champ Juan Puerta, LFA staple Kenny Porter and some other decent fighters, so he’s ready to join the UFC’s thin flyweight ranks. Even if the UFC does end up scrapping the division, Scoggins could score a bantamweight slot with the company.

Making his second straight appearance in this series, Zhalgas Zhumagulov remains one of the best flyweights in the world. The Kazakh fighter is the Fight Nights flyweight champion. He regularly takes on the best talent in the Russian regional scene and deserves a shot in the UFC.

The Erkin Kush disciple is a good all-around fighter, but he is another fighter who could benefit from a higher stoppage rate. He tends to engage in close fights, which could eventually lead to tough losses. In 2019, he fought just once, topping former UFC title challenger Ali Bagautinov by decision. The win stands as proof that he can hang in the big show.

Zhumagulov would add depth and a competitive guy to the UFC’s flyweight class.