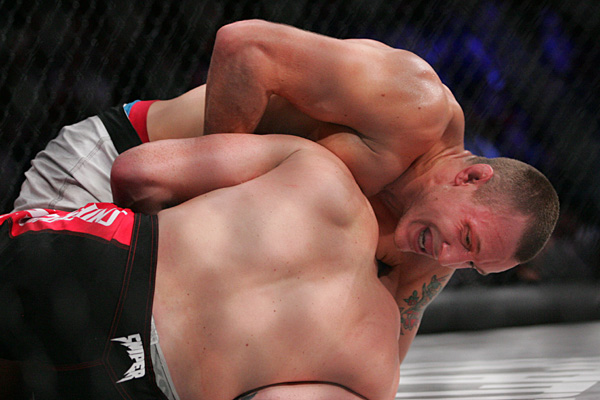 Upset of the Year – Jack Hermansson vs. Ronaldo ‘Jacare’ Souza (UFC on ESPN+ 8)

Coming off a 49-second submission over Renzo Gracie black belt David Branch, Jack Hermansson was finally getting noticed by MMA fans. Still, few thought that he stood a chance against Ronaldo “Jacare” Souza when “The Joker” stepped in to replace an injured Yoel Romero.

The fight with Souza came less than a month after the victory over Branch. On paper, it was a stylistic match for Hermansson. Jacare is a world-champion grappler, and Hermansson’s bread and butter has always been his ground game. Furthermore, Souza was coming off an impressive third-round knockout of former champ Chris Weidman where his boxing looked better than ever. Trying to defeat Souza with less than a full fight camp was certainly a daunting task.

This is what made Hermansson’s performance so impressive. There was no question who won the five-round contest, and Hermansson even set a middleweight record for most significant strikes landed in a five-round fight with 148 strikes landed. These blows found their mark both standing and from the ground, where Hermansson more than held his own against the eight-time world jiu-jitsu champion. He even threatened to submit Souza with a guillotine that would have forced a lesser grappler to tap out.

The middleweight division was put on notice after seeing Hermansson soundly defeat Souza. He left the Octagon that night as a true title contender. Anyone who had ever gotten the better of Souza has been an elite world-class fighter at the top of their game, and that is exactly what Hermansson proved to be when the two met back in April of 2019.

Hermansson’s win over Souza is our choice for the 2019 “Upset of the Year.”