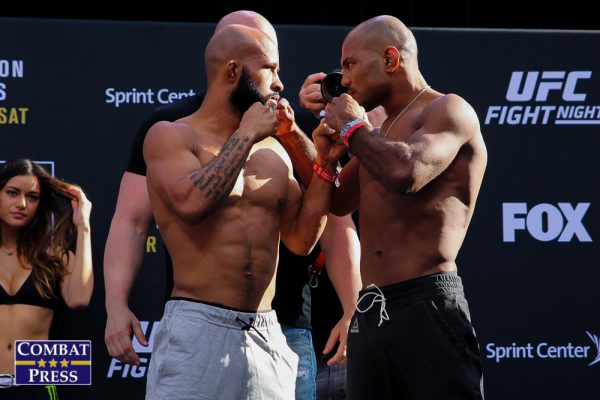 Where Do We Go From Here?: The Demise of the UFC Flyweight Division and What Comes Next

Pound-for-pound great, and longtime UFC flyweight champion, Demetrious “Mighty Mouse” Johnson is now a member of the ONE Championship roster. Current UFC flyweight champion Henry Cejudo is musing about the end of the division over which he reigns, while also anticipating a bantamweight fight with T.J. Dillashaw. Jose “Shorty” Torres revealed that he’s the first in an upcoming wave of releases for UFC flyweights. Meanwhile, FloCombat is signalling the end of the UFC’s 125-pound division in its entirety.

The WME-IMG/Endeavor-owned UFC might be done with the smallest men on its roster, but these guys still have to land somewhere. So, where to go from here?

Before the organization first dipped its toes into the 125-pound waters, many of the division’s future stars were competing at 135 pounds. This includes the aforementioned Mighty Mouse, as well as perennial flyweight contender Joseph Benavidez and eventual The Ultimate Fighter 24 winner Tim Elliott.

Now, the UFC’s current flyweight kingpin, Henry Cejudo, is already busy hyping a potential “super fight” with bantamweight titleholder T.J. Dillashaw. It makes sense for Cejudo, who struggled to make the 125-pound limit early in his MMA career. While fans of the flyweight division would love to see Cejudo take on the same gauntlet of flyweights that Mighty Mouse dominated for years, the Dillashaw fight would bring with it more money and more attention.

Unfortunately, the UFC isn’t tossing out a blanket offer for fighters to move up. It’s likely that Cejudo will be joined by some of the other better-known stars of the 125-pound roster, such as the aforementioned Benavidez and Sergio Pettis, who actually started his Octagon run at bantamweight. Other fighters might be too small to compete successfully at the heavier weight, or they simply won’t get a chance, as was the case with Torres.

This is the logical landing spot for many of the high-profile castoffs from the UFC’s flyweight division. The UFC essentially “traded” longtime staple Mighty Mouse to Asia’s biggest MMA organization, and it’s likely that the company will want to enhance its own homegrown talent with an injection of UFC talent.

Geje Eustaquio is the reigning ONE flyweight champion, and the division also houses Adriano Moraes, Kairat Akhmetov and Danny Kingad, among others. However, this scenario is similar to the one Ben Askren faced as ONE’s welterweight champion. Mighty Mouse will compete against a set of talent that he will easily outpace until he hits his own career decline. However, ONE could bring in the likes of Jussier “Formiga” da Silva, whom Johnson never did fight under the UFC banner, and Ray Borg, Deivison Figueiredo and Alexandre Pantoja, assuming those fighters don’t simply join the UFC’s bantamweight division. These fighters would make ONE Championship the new home of the world’s best flyweights.

Of course, fight fans would love to see Mighty Mouse in a super fight against ONE’s bantamweight champion, Bibiano Fernandes. There’s one major complication to this stellar idea, though: Johnson and Fernandes both train out of the AMC Pankration camp under Matt Hume and enjoy a longtime friendship. It’s doubtful that this fight will ever materialize, leaving ONE with the need to supply Mighty Mouse with plenty of other intriguing match-ups.

Bellator has coveted UFC free agents lately, and the company still ranks as the big No. 2 behind the UFC. Bellator head Scott Coker has long been skilled at capitalizing on available talent to build his promotion into a solid competitor, be it Strikeforce or Bellator.

While Bellator could easily house a new men’s flyweight division, it’s not quite as appealing for the promotion without a huge centerpiece to build around. Mighty Mouse and Cejudo are the biggest stars at 125 pounds, and neither would pioneer a new Bellator division, obviously. Furthermore, Coker has never been at the forefront of the smaller divisions. He’s constructed some epic heavyweight tournaments, but his usual interest seems to diminish as the weight classes get lower. He inherited a strong featherweight and bantamweight class in Bellator, but he probably wouldn’t have spent much effort on them if he had to start from scratch.

On American soil, this is probably the most exciting big stage for the UFC’s castoff flyweights. The PFL has quickly drawn interest while experimenting with a new season format and a playoff period late in the year. Sure, the PFL isn’t on the same level as the UFC or Bellator yet, but its formula seems to be working. The company has even seen star turns from the likes of Ray Cooper III, who was a modest 13-5 upon entering the promotion but quickly turned heads with a TKO finish of Jake Shields.

If the PFL applies its format to a flyweight bracket that includes Formiga, Borg, Figueiredo, Pantoja or even Torres, along with other UFC fighters that receive a pink slip, then it could spark even more interest in its product. The tourney format could also allow some of these fighters to go the Cooper route and suddenly emerge as new stars of the weight class.

Remember when the men’s flyweight division was gaining steam? We’re talking about the years when Mighty Mouse and Benavidez were competing as bantamweights, while Formiga, Ian McCall and Darrell Montague were churning a ton of interest in a rather small Californian promotion called Tachi Palace Fights. When the UFC got into the flyweight business, it essentially raided this talent pool and left Tachi with very little to distinguish itself from other rising regional organizations.

If nobody else bites on the idea of gathering the UFC’s unfortunate castoffs, then Tachi could revive its own calling card and bring some of these fighters back to strengthen its lineups and draw a national or even global crowd to its product, much like it did immediately prior to the UFC’s launch of a flyweight division.

Is this likely? No. But there’s nothing like a little nostalgia and wishful thinking.