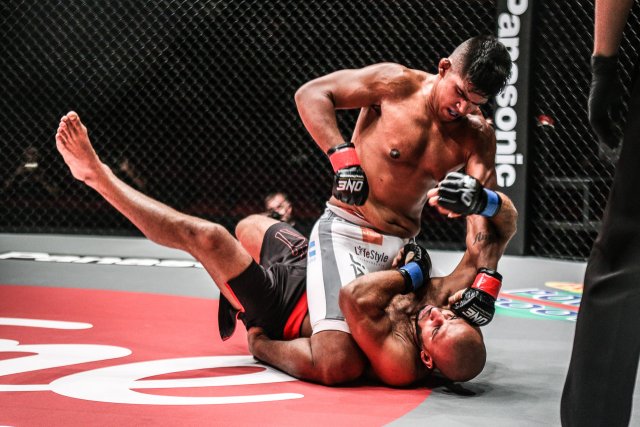 ONE Championship: Pursuit of Power Preview and Predictions

Former Lion Fight champion Jo Nattawut meets French Muay Thai fighter Yohann Drai, who opted to sign for ONE championship rather than compete in the 2018 Kunlun Fight 70-kilogram Final 16. Although, he qualified for the Final 16 with victories over Nikola Cimesa and Feng Xingli earlier this year.

The preliminary card action kicks off at 7:00 a.m. ET on Facebook and Twitter. The main card continues live on the ONE Championship App at 8:30 a.m. ET.

Agilan Thani makes his eighth appearance in his home country of Malaysia against his toughest opponent he’s ever faced on his home turf. Can Thani keep his undefeated streak in Malaysia alive or does Zebaztian Kadestam play spoiler in his path back to contention?

Throughout his run inside the ONE cage, Thani has run through most of his competition with seven of his eight wins coming by way of stoppage. Thani’s lone defeat came against one of the best fighters to grace the ONE cage, former welterweight champion Ben Askren. Thani didn’t stand much of a chance against the far superior wrestler, a style that Thani uses well in his own fights. Since the loss to Askren, Thani has won two fights, including a second-round submission victory over Amitesh Chaubey in Malaysia earlier this year. Now, Thani will get another step up in competition when he faces Kadestam.

The former Pacific Xtreme Combat welterweight champion picked up a monumental comeback victory over dangerous Brazilian Luis “Sapo” Santos with a third-round stoppage in his ONE Championship debut. Kadestam was struggling with the size and wrestling ability of Santos. However, the Swede defended a takedown attempt late in the third round, pushed his opponent onto his back, and capitalized on the opportunity with two devastating knee strikes to his grounded opponent that put Santos out cold. After his incredible debut, Kadestam fought Ben Askren for the welterweight title, but came up short against another far superior grappler.

This fight could play out in a similar manner, as Kadestam faces another strong, clinch-based wrestler with submission abilities. Kadestam’s bread and butter is his striking, which he honed over many years training in Thailand with various gyms. Like Thani, Kadestam is a finisher with eight stoppage wins in his nine career victories. Kadestam does have punching power on the feet, however. Thani is an aggressive, pressure fighter who has the size, strength, and power to take advantage of his wrestling and get the Swedish fighter to the mat. Once on the ground, Thani immediately looks to improve position and throw devastating ground-and-pound. Kadestam is incredibly tough and has survived beatings before, but Thani will likely get a boost from his hometown fans cheering him on. If Kadestam keeps this fight on the feet, he has the striking arsenal to put most fighters away with a few clean shots.

This fight will get started quickly, which could lead to a spectacular stoppage or an all-out war, like the fans have been accustomed to in recent ONE Championship main events.

Yohann Drai makes his ONE Championship debut following a stellar run of nine victories in his past ten fights including wins over former top-10 lightweight Jomthong Chuwattana, 2018 Kunlun Fight 70-kilogram Final 16 participant Feng Xingli, Nikola Cimesa, and Martin Gano. Drai is coming off of the biggest win of his career over Jomthong, who he bested by decision at All Star Fight 3. At 26-years-old, Drai is coming into his own as a fighter who is ready to continue to take on stiffer competition in the future.

Drai gets that match-up when he faces former Lion Fight champion “Smokin'” Jo Nattawut, who holds 66 career victories to only six defeats. The hard-hitting Thai fighter made his ONE Championship debut earlier this year against legendary kickboxer Giorgio Petrosyan, who put on a clinic against Nattawut. Petrosyan never let Nattawut get into a rhythm. Petrosyan used his superior boxing from the southpaw stance to take Nattawut out of his game. The Thai fighter’s biggest weapon is his heavy kicks to the legs, body, and head. Petrosyan was able to minimize his kicks’ effectiveness while scoring his own strikes. Fortunately for Nattawut, Drai doesn’t have the hands of Petrosyan, but he is a very skilled fighter.

A victory for Drai means continued exposure on the world stage. The Frenchman has quietly built his resume fighting in Kunlun Fight and Muay Thai over the past few years. A decisive win, or impressive performance, against Nattawut will continue to raise his stock as a largely unheralded prospect. However, Nattawut has the tools to shut down Drai’s game, especially if he can consistently land his body kicks and control the distance with his teep and clinch work. This fight could be billed as a changing of the guard, but Nattawut isn’t quite done yet.

Which bout is the sleeper fight on this card?

It’s not really a sleeper bout since both fighters have won championships in major regional MMA promotions, but the contest between former Legend FC and ONE champion Narantungalag Jadambaa and former King of Pancrase champ Kazuki Tokudome is probably the best fight on the card, both on paper and in what it could potentially deliver to the fans.

Jadambaa has been competing in combat sports for over 15 years, but the 42 year old still has the skill set and physical abilities to continue to compete for years to come. Mongolia’s greatest fighter in the country’s history has been a main stay in ONE Championship since the third year in the promotion’s history. Jadambaa won the title in only his second fight, but he hasn’t stopped producing highlight reel moments despite losing the title in an absolutely grueling battle against Marat Gafurov. Jadambaa hurt the Russian multiple times throughout the four-round fight. Since the first loss to Gafurov, Jadambaa has finished all three of his opponents, including former ONE lightweight champion Kotetsu Boku.

Kazuki Tokudome, 31, makes his ONE Championship debut coming off of a loss, but the talented lightweight has won six of his past eight fights since getting cut by the UFC. Both of those losses came against Takasuke Kume in title bouts under the Pancrase banner. Tokudome shocked the Japanese audience when he floored Satoru Kitaoka to win the King of Pancrase title in his return to the promotion. Tokudome also picked up stoppage wins against UFC veteran Akbarh Arreola, Akira Okada and Yoshihiro Koyama in that span. Tokudome is one of many Japanese fighters the promotion has brought in to help them make its debut in Japan, which is tentatively scheduled for March 2019.

This bout takes place between two devastating power punchers, who are just one strike away from a highlight-reel finish. Jadambaa has the wrestling advantage, but his recent run of knockouts could lead to an exciting back-and-forth battle on the feet. Whoever wins will set himself up for another big match-up in the future, while featherweight champion Martin Nguyen continues to compete at bantamweight.