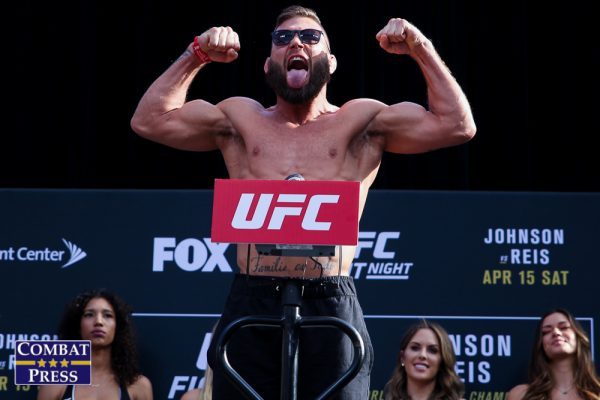 After two years of early weigh-ins, the UFC will transition away from this format. UFC President Dana White made the announcement on the June 5 edition of the UFC Unfiltered podcast.

“We’re getting rid of it,” White said. “We’re looking at taking the weigh-ins back to the way they used to be. So when the guys weigh in there, at the [ceremonial weigh-ins], that will be it. That’ll be the real weigh-in.”

The current format places fighters on the scale in the morning, but they return later in the day for a ceremony open to the public. A return to the old format would mean weigh-ins are pushed back to the afternoon according to White.

Between June 3, 2016, to May 31, 2018, statistics compiled by MMA Junkie’s Mike Bohn show 62 fighters that missed weight under the current system, with 15 who did not enter the Octagon. The heavyweight division was the lone weight class to have no fighters miss the mark during this time. Under the old format between June 6, 2014, and May 30, 2016, 32 fighters missed weight, with just five not entering the cage..

Uriah Hall was taken off of a January event in St. Louis after traumatic side effects of weight-cutting. A number of combat-sports athletes outside of the UFC have died from the practice.

“I mean, I was in and out of it — I was conscious, but I was unconscious,” Hall said in January. “I knew what was happening, but I was fighting over it. I was punching. I think I had a mini seizure and at the same time a slight heart attack. My kidneys were just not good.”

More recently, welterweight Darren Till fought Stephen Thompson at a 174.5-pound catchweight on May 27. Footage emerged of Till’s weight cut that “appalled” the head of the Association of Boxing Commissions and Combative Sports Mike Mazzulli so much that he called for the suspension of Till’s cornermen. The video has since been removed from Youtube.

Lightweight title contender Kevin Lee missed weight prior to fighting Edson Barboza at UFC Fight Night 128 in April. Lee, a veteran of more than 400 wrestling matches and more than 30 MMA fights, said in a statement posted to social media, “For the first time ever in my athletic career since high school, I’ve missed weight this morning. I just ran outta time.”

Lack of time was the primary reason White gave for early weigh-ins getting the ax, but it’s not the only reason.

“I think that when we started doing morning weigh-ins, it was very good,” said White. “Everybody was making weight, everything was great. Then, people started cutting it closer and closer and closer, thinking they can put on more weight because they have more time to recover, and the reality is, it fucked everything up. So we’re looking at going back to — at 4 p.m. Pacific Time — when we do the weigh-ins. Those will be the real weigh-ins.”

The announcement elicited negative reactions from many in the combat-sports community, ranging from fighters in and outside of the UFC, to former referee “Big John” McCarthy and fighter-turned-nutritionist Mike Dolce.

High School and College Wrestlers make weight 20-30x in a 6-month period and everyone is complaining about PROFESSIONAL ATHLETES who can’t discipline themselves to make weight 2-3x a year. The athletes are the problem, not the system. I’m done with this topic.

Early Weigh inns were the best thing to happen to this sport . You are either accountable or Not . Missing weight has nothing to do with the structure is has to do with the individual. 🤦‍♂️ #baddec #makeweight

It’s a huge mistake. Why is it you would change things for the small minority of fighters not doing things right, pushing the envelope of what their bodies can lose and penalizing all of the fighters who do it correctly? Does this make sense to you? https://t.co/nKvWDltUcV

Doing away with early weighins would penalize the majority of upstanding athletes for the misdeeds of the unprofessional minority. A better solution would be to continue early weigh-ins at 9a but also allow weights to be certified during public weighins at 4p. @danawhite @ufc

This is not a change that can be implemented solely by the UFC. White said that the organization is working with the various state athletic commissions to return to afternoon weigh-ins.